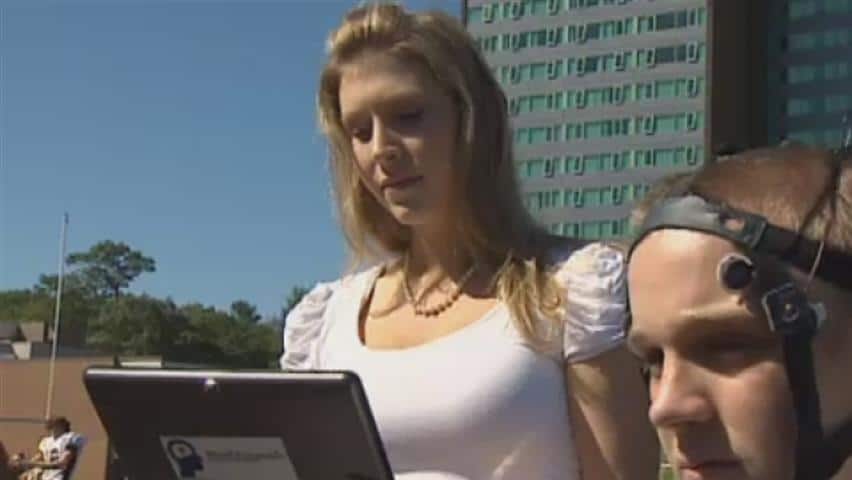 7 years agoVideo
1:01
Mindful Scientific has developed a device called the Halifax Consciousness Scanner. It is used to diagnose concussions or other brain abnormalities by measuring the brain’s electrical activity on the sidelines. 1:01

Mindful Scientific and the National Research Council have developed a device called the Halifax Consciousness Scanner, which is used to diagnose concussions or other brain abnormalities by measuring the brain’s electrical activity on the sidelines.

Citadel football players will all have a baseline brain scan before this season that can be used for comparison after a hard hit to diagnose electrical changes in the brain.

This information gives those who work on the sidelines the ability to more accurately diagnose brain damage and to better assess an athlete’s fitness after a hard hit.

"We use auditory stimuli," said concussion researcher Victoria Smith. "[The player] puts these earphones in his ears and he listens to a series of tones and sentences, and what we do is we read those brain waves."

While taking the test, Ian Farrell, a receiver for Citadel High, repeats what he hears. "'Ian wrote on the chalkboard during the election.' Just random sentences with my name put into them," he said.

Any change in the baseline brain scan after a hit in the field will keep the player out of the game.

Right now, coaches check the eyes of athletes and ask them questions to try to diagnose brain injury.

Quarterback David Luke said he likes the idea of a more objective test for concussions.

"Sometimes people don't want to acknowledge they have concussions, they want to play through it and stuff, so I think it’s really good," he said.

Device might have kept Sidney Crosby off the ice

Ying Tam, president of Mindful Scientific, said that if the portable brain scanner had been ready two years ago, Sidney Crosby might not have been sidelined for so long by a brain injury.

"If he had been assessed with a device like this at the bench, a device that could do it rapidly and accurately, then he wouldn't have gone back out and had that second hit. Maybe he was out with that first concussion for two weeks or a month but he wouldn't have lost a year and a half," said Tam.

The portable scanner could eventually be used in ambulances as well as sporting events.

The consciousness scanner is a work-in-progress. The field tests performed on Citadel High football players will help agencies such as Health Canada and the U.S. Food and Drug Administration decide whether to approve it for sale.