A third-storey deck crashed to the ground during a house party in Halifax's south end Saturday morning, sending six people to hospital.

Collapse happened around 2 a.m. AT at home on Brussels Street 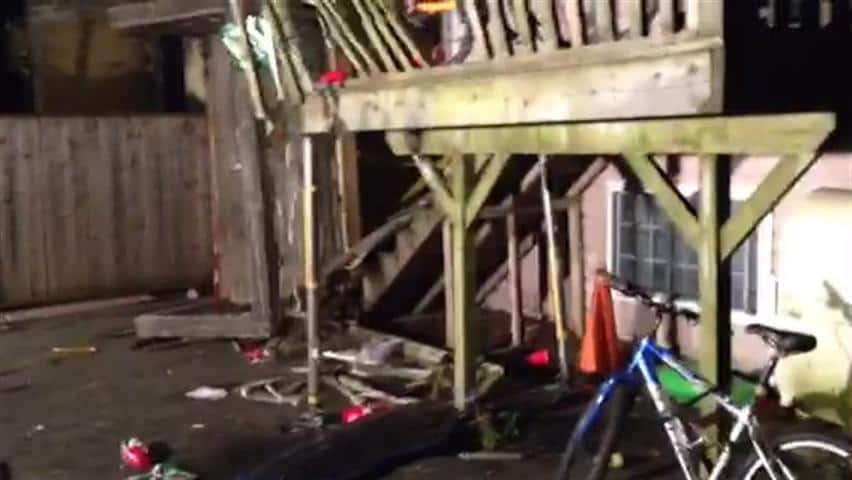 6 years ago
0:32
A 3rd-story deck crashed to the ground during a house party Saturday morning. 0:32

A third-storey deck crashed to the ground during a house party in Halifax's south end Saturday morning, sending six people to hospital.

Four women and two men, all in their early 20s, were taken to hospital. Police say some of the victims have serious injuries but all are expected to survive.

Alex Rose, who lives in the house where the balcony collapse occurred, said he’s struggling to make sense of what happened.

He was in the basement at the time and rushed up to the third floor.

"I saw one person directly below me who seemed to be in a lot of pain, and that was on our lower porch, but then on our driveway there was another guy who was just lying there," he said.

"They all had people around them but that's what I saw from above where our balcony used to be and now there's just empty space."

Staff Sgt. Nancy Rudback said a party was underway at the home when the deck collapsed.

She said police have yet to contact the owner of the house.

"At this point we're looking to get a hold of a building inspector and the investigation will be continuing today when members with the criminal investigation division come in," said Rudback.

A newspaper clipping from 2002 shows the deck of the house was part of a controversial addition to the original home.

According to court documents and an article by the now defunct Halifax Daily News, there was backlash from neighbours.

The owner at the time attempted to turn the house into two apartments.

The issue went to court and the owner was ordered to pay thousands of dollars to the city.

As neighbours worry about those hurt last night, they question what happened to cause the deck to collapse.

"I'm sure it's going to interrupt their studies — the injuries they have may last them for a lifetime now, the consequences of it. It's a sad thing to happen, very sad," said neighbour Sally Dewolf.

A property search revealed the owner of the house is Darin Sweet, who purchased the property from Vance Fraser Joudrey in July 2004. The property has an assessed value of $522,400.

CBC news called Sweet but have not heard back.

Last September, 15 people were sent to hospital after a deck collapsed in Dartmouth.