Tenants in a Dartmouth, N.S., apartment building are being evicted so the owners can renovate and increase rent. They've told tenants they want to keep the building “affordable,” but the proposed new rent is too high for many existing tenants.

Tenants can reapply to the building after renovations, but rents will be hundreds of dollars higher 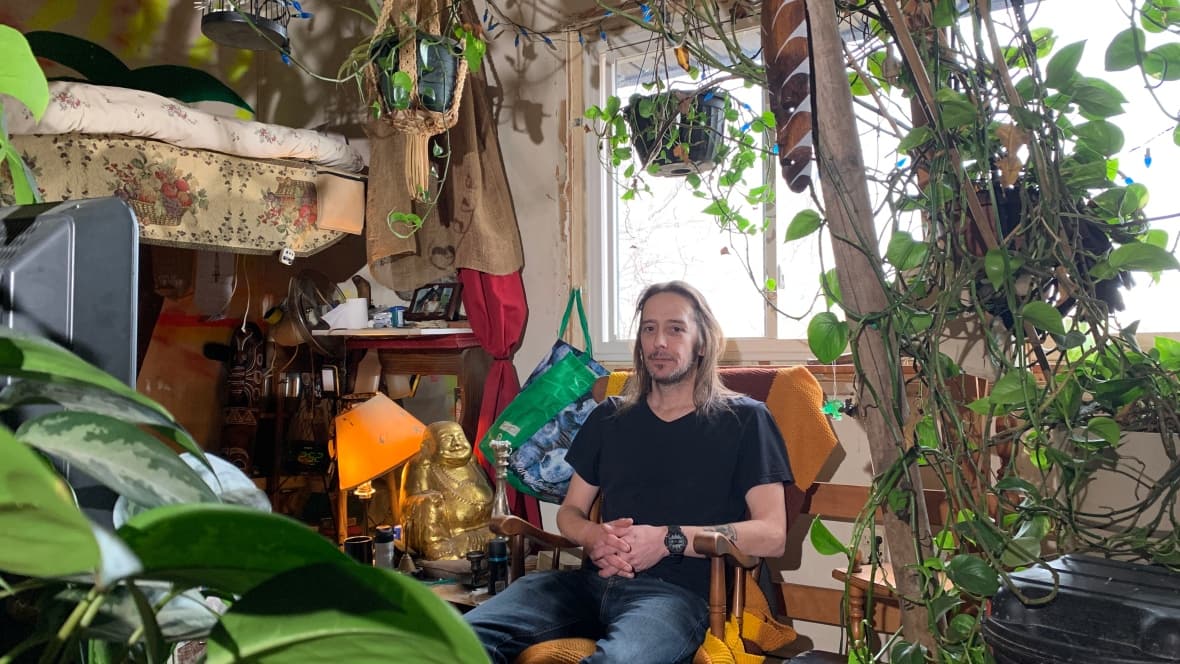 11 months agoVideo
2:03
Tenants in a Dartmouth, N.S., apartment building are being evicted so the owners can renovate and increase rent. They've told tenants they want to keep the building “affordable,” but the proposed new rent is too high for many existing tenants. 2:03

By May 1, Cyril Hatfield has to be out of the apartment he's lived in for the past decade, and he sums up the way he's feeling about it with one word: scared.

"My hands are shaking just talking about it."

Hatfield lives in a bachelor apartment at 23 Crystal Dr., a 15-unit apartment building in the north end of Dartmouth, N.S.

Hatfield has an affinity for plants. For 10 years in this apartment, he's tended to dozens of vines that have climbed up walls and now drape overhead. With his pending eviction, he said he's been thinking about how to disentangle them for the move.

But first, Hatfield has to find a new place to live, and he, like many of his neighbours, is struggling to find something he can afford. He currently pays $550 per month, all-in. The average rent for a bachelor apartment in Halifax is $812.

Every tenant at 23 Crystal Dr. is being evicted this spring so the property owners can renovate the building and raise the rent. The owners have told tenants they want to keep the building "affordable," and tenants can reapply after renovations.

But the proposed new rent, $875 per month, is too high for many people currently living there.

In a notice dated Jan. 30, 2020, the owners told tenants they would have to move out by the end of April for "extensive demolition, repairs and renovations."

It's signed by Central East Developments, a company co-owned by Spencer Meens and Adam Barrett, according to the Nova Scotia Registry of Joint Stocks. They did not respond to interview requests from CBC News.

"It's what has been, I guess nicknamed, or phrased as 'renovictions,'" said Hatfield.

It's a scenario the Canada Mortgage and Housing Corporation (CMHC) described in its latest report on the Halifax rental market. It said a record-low vacancy rate, coupled with record-high new development, is driving rents up and making housing less affordable.

In January, CMHC reported rental vacancy had dropped to one per cent, which is the fifth annual drop in as many years, and the lowest number since it started reporting rental vacancy data in Halifax in 1990.

More than 4,000 new rental units have entered the rental market since 2017, but "new apartment supply is not coming onto the rental market fast enough to offset increased demand," the report said. CMHC attributes growing demand to high rates of immigration and interprovincial migration.

The new construction has created what CMHC called a "very high" proportion of newer units on the Halifax market, compared to other Canadian cities.

"This has increased the quality of rental stock, incentivized older buildings to upgrade in order to compete and affected affordability, because rents have increased faster than disposable income," the report said.

The one per cent vacancy rate is top of mind for tenants in the building.

Prospective rentals have either been "too gross" or too expensive, so Hatfield is trying to find a roommate. But, he said he worries about splitting living expenses.

"You're depending on other people to pay their bills, and you can't always do that," he said.

Hatfield's downstairs neighbour, Daniel Kearley, said he's looked for apartments with each of the suggested companies. In some instances, he said he applied and was rejected. In others, the prices were too high.

Kearley and Hatfield are both on fixed incomes, paid for by the province's disability support program.

After 10 years working around housing and homelessness, Darcy Gillis has seen cases like the one at 23 Crystal Dr. before, but he said they're becoming more common.

Gillis is a housing support worker at Dartmouth Housing Help, a non-profit that works with individuals who have challenges finding and keeping stable housing.

Gillis said many apartment buildings in North Dartmouth are around the same age as 23 Crystal Dr. — which was built in 1976 — and renovations are to be expected.

There have been five recent complaints filed against 23 Crystal Drive's owners under bylaw M-200, which sets minimum living standards for all residences, said a spokesperson for the Halifax Regional Municipality.

The spokesperson would not divulge the specifics of the complaints, but said HRM responded to each of them and closed the files.

Central East Developments bought the building in December, and Gillis said he respects the new owners for taking on deferred maintenance, but evicting tenants leaves them "in a lurch."

"It's really unfortunate," Gillis said. "There's no plan for individuals who are being mass evicted for building renovations."

Gillis is currently trying to help six tenants at 23 Crystal Dr. find new housing, but he said it's challenging.

"Low income is always going to be a barrier. And with the vacancy rates so low, the landlords aren't really considering people who don't have as much money."

The Nova Scotia government added more than 500 new rent supplements — which are meant to close the gap between what renters can afford and what the market is charging — to the 2020-21 budget.

Some tenants have already moved out of 23 Crystal Dr. The doors on six units hang open and renovations are well underway.

In empty units and common hallways, the floors have been stripped down to plywood and construction crews are putting up walls to turn the bachelor apartments into one-bedrooms.

If any tenants remain come May 1, Gillis said they have a few options.

If they're on income assistance, the province could move them into a hotel, temporarily. If not, Gillis said he would usually refer them to a shelter. But lately, many Halifax shelters have been full.

"So... if the individual doesn't have family or friends, most of them would have to go out onto the streets, which is scary," he said.