Many Nova Scotia prosecutors descended on Province House in Halifax Wednesday to protest legislation introduced by the Liberal government that will impose a contract on them. 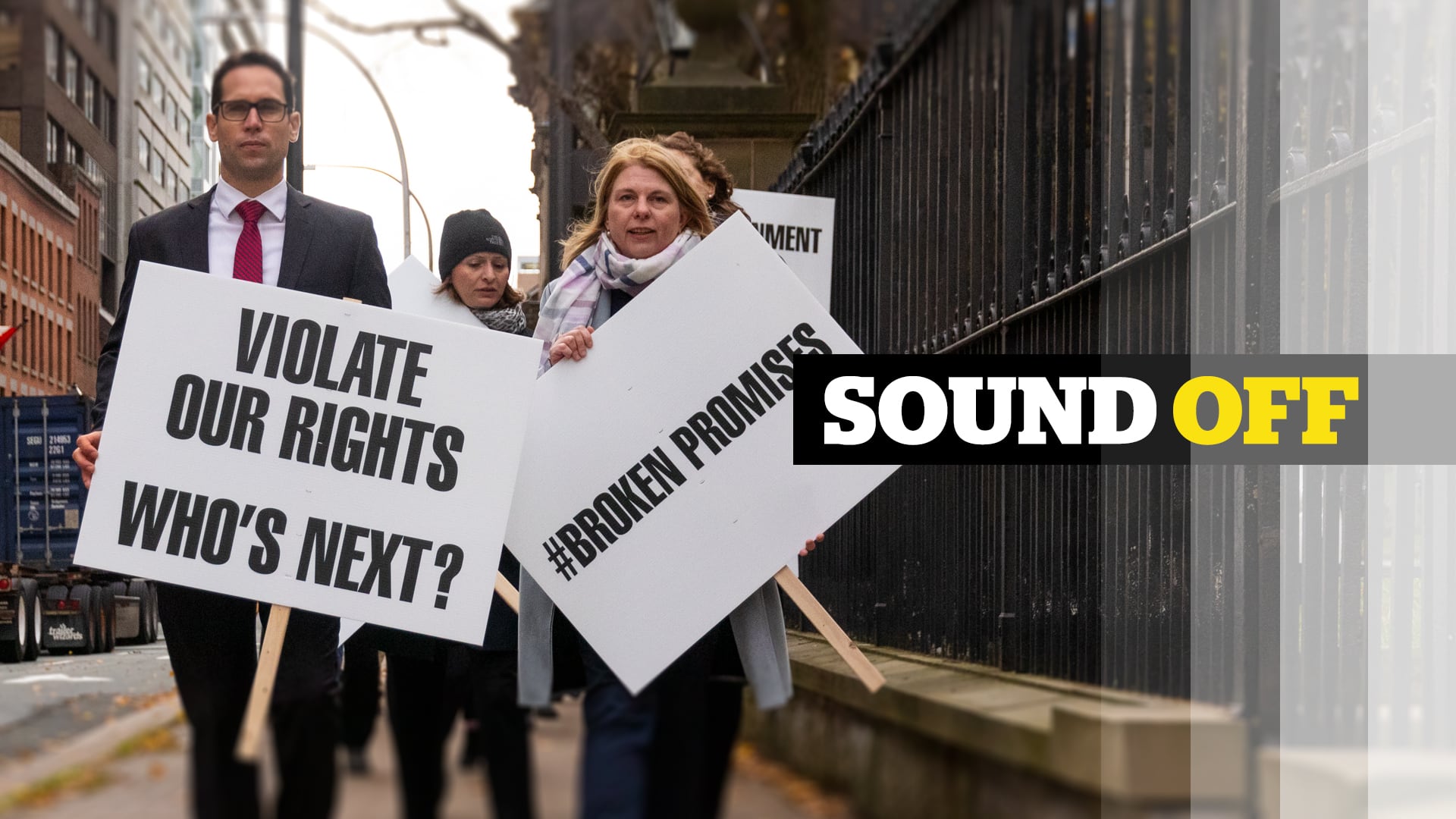 Sound Off: Understanding Bill 203 and the Crown attorneys strike

1 year agoVideo
2:52
On Wednesday morning outside Province House, Nova Scotia's Crown attorneys began day one of their strike. Watch this video if you're not sure what they're opposing and why.  2:52

The Nova Scotia government has applied for an emergency injunction to end a strike by Crown attorneys that on its first day resulted in multiple cases being dismissed as the justice system struggled to cope.

Crown attorneys walked off the job Wednesday in response to Bill 203, which the government sprang on them last week after the two sides failed to reach a contract agreement and the prosecutors were poised to exercise their contractual right to binding arbitration.

The government extended that right for 30 years in the last agreement in exchange for Crowns agreeing to a lower wage increase, but this time around the province brought in legislation before the right could be triggered.

Bill 203 instead gives the prosecutors the right to strike, but also makes them an essential service and imposes a wage increase of seven per cent over four years. Crowns had been asking for a 17 per cent increase over four years.

Premier Stephen McNeil told reporters on Wednesday his government wanted to remove the prosecutors' right to arbitration because their salary ask was too high this time.

"Why is it appropriate for any bargaining unit in this province to put 17 per cent on the table and not move? Because they know they can go to an arbitrator," he told reporters.

The premier said it would be unfair to the rest of the public service to give the Crown attorneys what they're asking for and he made clear that his government would not treat any group of public servants differently than another.

"We don't go into one group and say we're going to give you a 17 per cent pay raise and then say to someone else, 'By the way, you're not worth that.'

"How is that reasonable for anyone? That may be how other governments have done it, [but] it has not happened since I've been here, nor will it be the case."

Despite the firm stance, the premier has yet to produce—or even acknowledge that he has—a written legal opinion saying Bill 203 complies with the Charter of Rights and Freedoms.

Last week, leading experts in labour law, constitutional law and even the director of the province's Public Prosecution Service excoriated the Nova Scotia government over the bill.

Perry Borden, president of the Nova Scotia Crown Attorneys' Association, said cases involving drunk driving, assault, domestic assault, threats uttered and a multi-count fraud were all dismissed in Halifax provincial court Wednesday. In several cases, the Crown asked for an adjournment but the judge would not grant one.

Borden said the Crowns would contest the injunction application if necessary, but he said the problems in the court system fall at the feet of the government and if it wants the strike to end it should respect the Crowns' right to arbitration.

The filing from the province for the injunction says the strike is having a "harrowing effect on the criminal justice system in this province."

Borden agreed that the strike a threat to public safety, but then questioned how any strike by Crowns in the future—including the one Bill 203 would afford—would not be.

"We are not to blame for what's happening in courts," he said.

Rochelle Palmer, the Cape Breton representative for the Nova Scotia of Crown Attorneys' Association, said the prosecutors want to bring the government back to the bargaining table.

"We are hoping that the government will continue with us and bargain with us in good faith," Palmer said, adding the Crowns are "hoping the legislation is seen for what it is—a violation of our Charter rights and our constitutional rights."

Opposition leaders said the premier is responsible for any cases thrown out of court on account of the strike.

"The premier has set [their] contract aside, he's ripped it up," said Tory Leader Tim Houston.

"In doing so, he's disrespected the work these Crown attorneys do every single day and they're exercising their right to bring attention to the fact that what they're doing is important work."

Houston noted Crowns could make much more money in private practice if that was their motivation for the strike.

NDP Leader Gary Burrill said the Crowns aren't out on the street because they want to be, but because the government forced them there.

The government has called House hours on Thursday for 1 p.m. to 11:59 p.m., meaning Bill 203 could be passed as early at Friday.

With files from Blair Rhodes