Nova Scotia announced a COVID-19 case connected to an elementary school late Tuesday. Earlier in the day, the province announced 10 new cases of the coronavirus.

School is located in the central health zone, and will be closed Wednesday for deep cleaning

Nova Scotia announced a COVID-19 case connected to an elementary school late Tuesday. Earlier in the day, the province announced 10 new cases of the coronavirus.

The school is located in the central zone and is the fifth school in the province where a case of COVID-19 has been reported.

Parents and staff will be notified when the school is going to reopen.

The news release said all close contacts in the school have been identified. They will be notified by public health and told to self-isolate and get tested.

The other schools in the central zone where cases have been reported are:

Two cases have been identified at Northeast Kings Education Centre in the western health zone.

Earlier Tuesday, Nova Scotia reported 10 new cases of COVID-19, all in the central zone. With the St. Margaret's Bay Elementary case, that brings the province's total active cases to 143.

No one is in hospital related to COVID-19 in Nova Scotia.

At Tuesday's COVID-19 briefing, Chief Medical Officer of Health Dr. Robert Strang said he's heartened the new case numbers are stabilizing, but added that each new positive case has an average of eight close contacts. In the first wave, that number was just three.

Nova Scotia labs completed 4,138 tests Monday, the highest number of daily tests conducted since the start of the pandemic.

An additional 275 tests were administered at a rapid-testing site in Halifax and 585 at a similar site in Wolfville. There were no positive results at either site.

Premier Stephen McNeil said to date over 5,000 people have been given the rapid test, with 21 of them, all without symptoms, testing positive. Those people were told to self-isolate and instructed to take the standard test to verify their result.

Strang said two six-metre mobile units have been outfitted for deployment to outbreak areas. The mobile units will administer the standard test and not the rapid test.

"This mobility is it gives us a much better tool to be agile and flexible as needed across the province," Strang said.

One of these new units will be in place Wednesday at the Northeast Kings Education Centre in Canning, where two positive cases were identified, one last week and another on Sunday.

A full list of exposures in the province can be found here.

The restrictions include stopping dine-in service at bars and restaurants and closing gyms, libraries, museums and casinos until Dec. 9. Masks are also mandatory in common areas of multi-unit dwellings like apartments and condos.

At the briefing, Strang addressed people who are resistant to wearing masks when they have no valid reason for not wearing one.

"Stop looking for loopholes, stop making excuses, stop arguing with the people who drive our buses, who work in our access centres and who manage our retail stores when they ask you to put on a mask," he said. 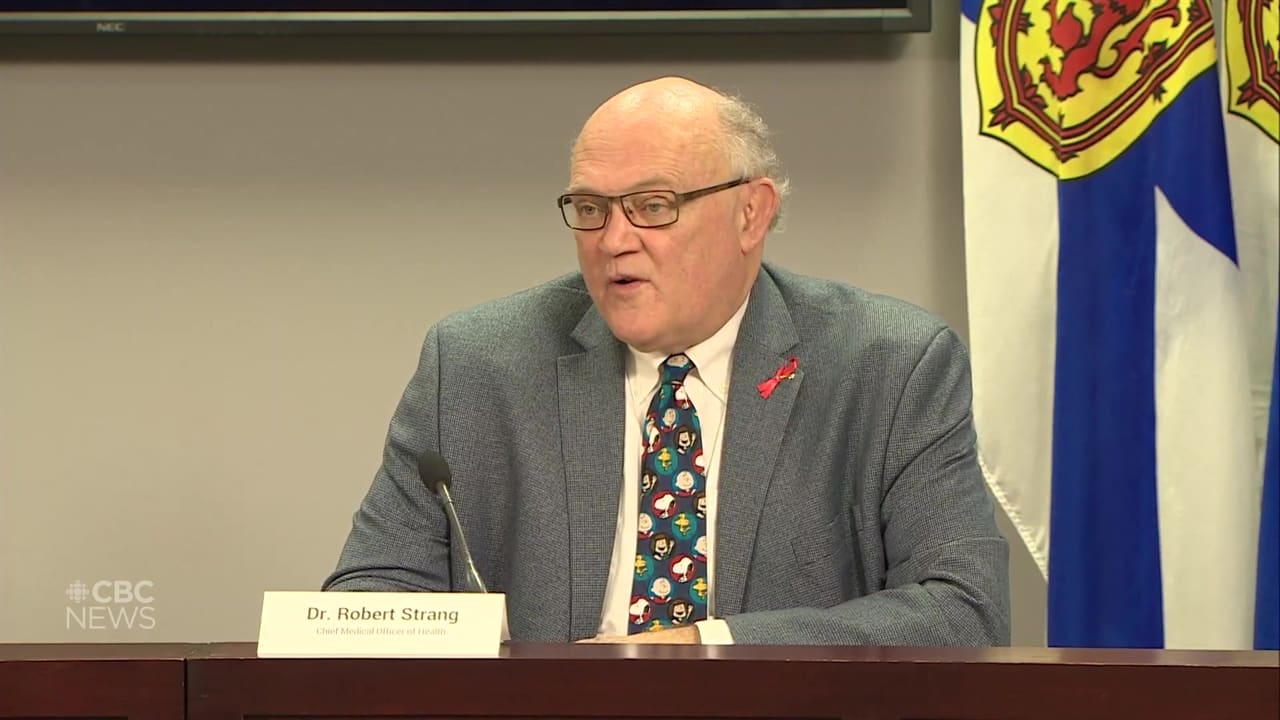 3 months ago
2:54
Nova Scotia chief medical officer Dr. Robert Strang says there are valid reasons medical reasons to not wear a mask — his son, in fact, has a disability that prevents it. But those people are few and far between and he had harsh words for those who are simply flouting public health rules. 2:54

A list of what's open and closed in the Halifax region can be found here.

Across the province, visitations to long-term care facilities are no longer allowed unless the person is a volunteer or designated caregiver.

Strang said holiday traditions are going to be very different this year, with "smaller and fewer gatherings and less travel." He said the spirit of the holiday season was more important than ever.

"I really encourage people to focus on what we have around gratitude and generosity, kindness and community, compassion and caring. Focus on those and how you give those, not what we're not able to do."

COVID cases in the Atlantic provinces

The latest numbers from the Atlantic provinces are: