N.S. public sector staff, students must self-isolate for 14 days if they travel outside Canada

Stephen McNeil and Dr. Robert Strang are speaking to reporters about how the province is dealing with the coronavirus pandemic. There are not yet any confirmed cases in Nova Scotia.

Stephen McNeil, Dr. Robert Strang speak to reporters about how the province is dealing with pandemic 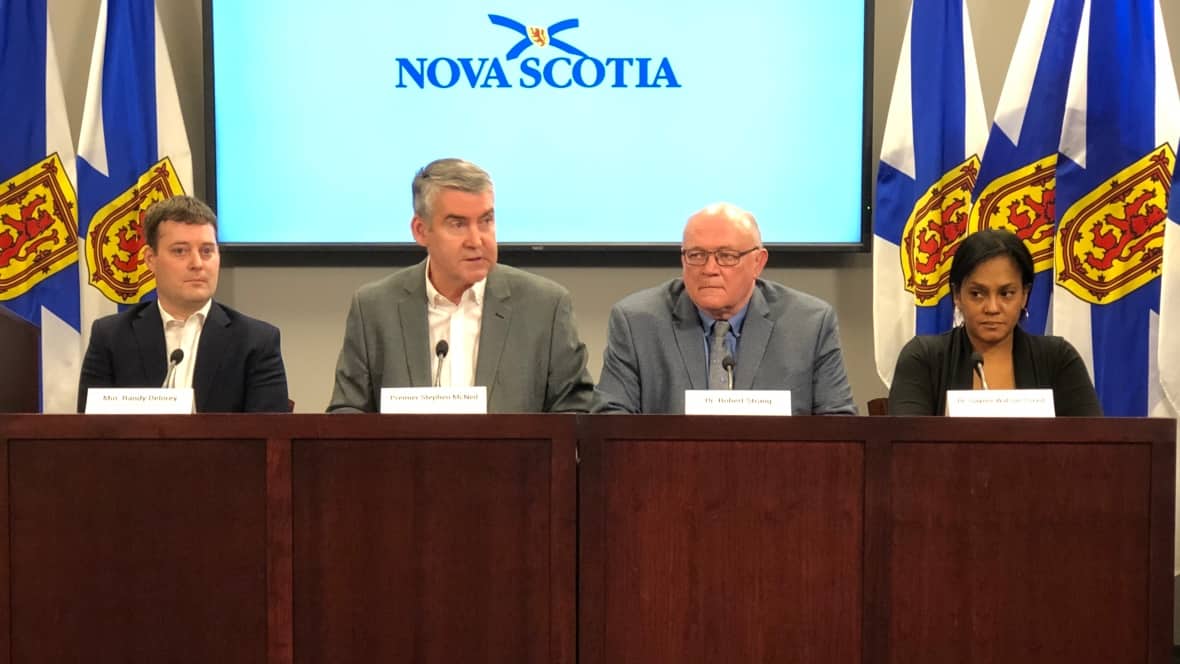 N.S. public sector staff, students must self-isolate for 14 days if they travel outside Canada

12 months ago
4:53
Stephen McNeil and Dr. Robert Strang are speaking to reporters about how the province is dealing with the coronavirus pandemic. There are not yet any confirmed cases in Nova Scotia. 4:53

All Nova Scotia public sector employees who travel outside of Canada will now be required to self-isolate for 14 days before returning to work.

"Isolated employees who can work from home, must [work from home]," Premier Stephen McNeil said during a news conference Friday morning.

There remain no cases of COVID-19 in Nova Scotia, but health officials said they fully expect cases to arrive here. To date there have been 226 negative lab tests.

In an effort to mitigate the effects of the pandemic, the premier also announced that any student or child in daycare who travels outside the country must self-isolate for 14 days before returning to class or daycare. The premier said online education tools would be ramped up to help make sure students in Grade 12 are able to get what they need to graduate on time.

McNeil said schools would not be permitted to hold concerts, assemblies or other large functions, and lunch sessions would be arranged in such a way to prevent mass gatherings.

Public sector employees would continue to be paid while they are in self-isolation.

McNeil said the government is not closing schools because there's no guarantee people would have had sufficient time to self-isolate before returning to class. It's also an acknowledgement that most students will not be travelling outside the country, he said.

The premier called on the province's universities and colleges to mirror the government's actions with its own students and faculty. McNeil said the best thing anyone who travels can do for themselves and their neighbours is to self-isolate.

"If we wait until it's here, it's too late," said Dr. Robert Strang, the province's chief medical officer of health.

Strang called on people to continue good handwashing and other hygiene practices. The province has doubled the number of lines for 811 and has set up an online self-assessment tool.

McNeil said the province is recommending public gatherings be limited to no more than 150 people. He's encouraging all businesses to follow the appropriate protocols and said the government would revisit the situation if necessary.

The premier said he's working with the federal government to delay the start of the cruise ship season and expected an announcement would come on that later today. He encouraged the private sector to follow the government's lead with how it deals with its employees.

"We need to work together, remain calm but deliberate," said McNeil.

Strang said the government would become more directive with its protocols if that becomes necessary. The Health Protection Act gives him the power, with the approval of the premier and health minister, to direct activities in an effort to prevent spread of disease, should that become necessary. Strang said his office would be monitoring the situation and make changes as necessary.

Even with the requirement for self-isolation, McNeil said he believes there is capacity to continue to providing government services.

"We're ramping up to ensure that we have the appropriate staff levels to be able to provide the services we do."

Delorey called on the public to ensure the information they're seeing online is accurate and not to spread false information. The minister said one post the government saw online on Thursday attributed false quotes to him and was presented as though it was an actual news report."Please don't spread misinformation."