Advocates for women in prison are taking a case to the Nova Scotia Supreme Court in Truro, N.S., on Monday, aiming to end the use of "dry cells," a practice they say amounts to torture in federal prisons.

Advocates for women in prison are heading to the Nova Scotia Supreme Court in Truro, N.S., on Monday, aiming to end a practice they say "amounts to torture" in federal prisons.

The use of "dry cells" involves keeping prisoners in a cell with round-the-clock lighting and without a flushing toilet or running water. They are watched through a glass window by guards, and security cameras are on 24 hours a day, even while prisoners are using the toilet.

The cells are used for male and female inmates suspected of ingesting or hiding contraband inside their bodies. Prisoners are watched until the item is removed through the person's bodily waste.

The woman at the centre of the case is Lisa Adams, who is almost finished serving a two-year sentence for drug trafficking at the Nova Institution for Women, a federal prison in Truro.

"For me, on a base level, I'd like to have the idea of dry celling removed from female institutions," Adams said in a telephone interview from Nova Institution supervised by the Correctional Service of Canada (CSC).

Adams, 33, spent more than two weeks in a dry cell in May, before a doctor's examination determined she did not have any foreign objects in her body.

"Because I'm not naive to the fact that drugs are an issue, and there has to be a means to prevent that, I'm hoping that potentially there could be an overhaul throughout all of CSC to find a new way to prevent this from happening," she said.

"A way that's less invasive, that's more trauma-informed and that takes into account the value of the individual as well as the security of the institution."

Adams has dealt with an addiction to methamphetamines for many years, as well as diagnoses of several mental disorders, including bipolar disorder and depression.

She was released on day parole in March but was rearrested in May, just after using crystal meth again. She was returned to Nova Institution, strip-searched and put through a body scanner.

No drugs were found in that scan, but several days later prison authorities re-examined the same images and changed their minds, saying they believed Adams was hiding several packages in her vagina that they described as "small and round, resembling balloons."

Staff also did a scan of her living quarters and found traces of meth on Adams's belongings. A urine test also came back positive for meth. Adams told guards these were traces that remained from when she used the drug before being rearrested. She told guards she did not have any meth in her possession.

Adams was then placed in the dry cell for 16 days. Expressing concern about a medical issue, she was eventually able to convince authorities to let a doctor examine her. The examination showed nothing in her vagina.

"There were some days I felt very strong and determined, because I knew that I was the wrong person to have in there and to try this out on," she said. "Other days I felt completely hopeless. I felt like I was not seen as a human being."

Adams describes her family in Saint John as supportive and "amazing." She has two sons who live with her mother. There were times when she believed that she would not see them again.

"I wrote a letter to my mother, my father. I started to write one to my children to say goodbye to them," she said.

Notes from Adams's health-care staff filed by her lawyers with the court showed that about a week after she entered the dry cell, Adams had a dissociative break.

She was mumbling to herself incomprehensibly, was unable to follow directions, pulled at her hair and continuously rubbed her hands up and down her arms. She was "jumpy and appear[ed] scared at noises and sudden movements."

"By the time it was getting near the end, I felt like I was losing my mind, quite literally. I felt paranoid," Adams said. 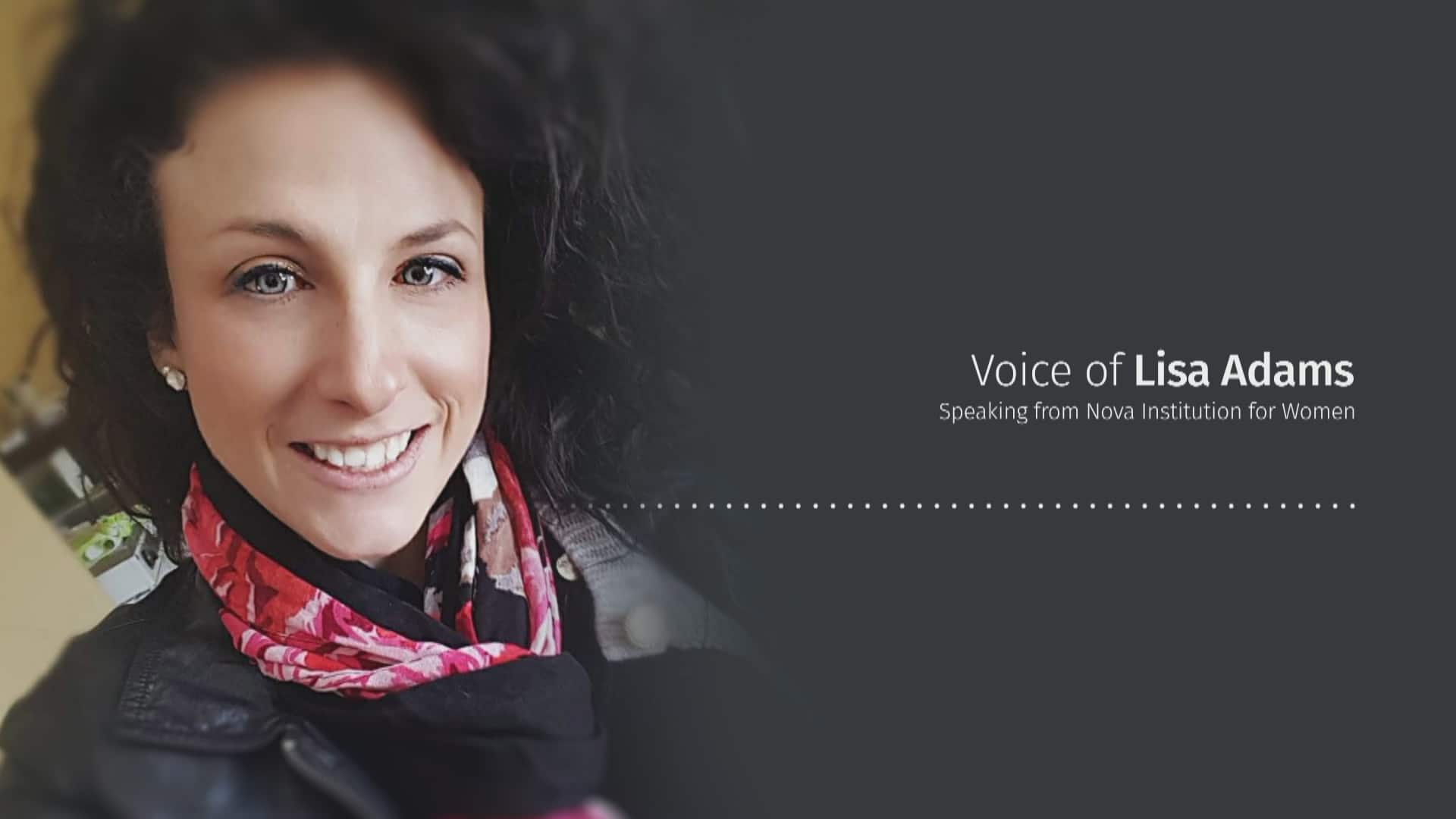 2 months agoVideo
3:29
Lisa Adams spent 16 days in a Nova Scotia prison 'dry cell' with no running water or flushing toilet. Guards believed she had concealed drugs in her vagina, but a doctor later found nothing. Now she's challenging the practice in court. 3:29

Staff were required to observe her and make regular notes in a log at least every 15 minutes.

"There were times I would look up and they were always writing and looking at me," she said. "Because I knew that I didn't have anything, I started to feel panicky and very paranoid."

Adams said she did not know how long her time in the dry cell would last, and she became afraid that something worse would happen to her.

"Slowly, having that monitoring kind of drove me off the deep end, for lack of a better way to say that."

"It was horrific for her," said Emma Halpern, executive director of the Elizabeth Fry Society of Mainland Nova Scotia, which is backing Adams's challenge in court.

"That experience of being observed that exists in the dry cell is almost incomprehensible to many of us."

The non-profit organization, which advocates for women in the criminal justice system, said the use of dry cells is unconstitutional because it violates a person's life, liberty and security of the person, under Section 7 of the Charter of Rights and Freedoms.

"These are our women in our community who are experiencing what, really, in international law has been found to amount to torture and violates the charter."

No limit on the use of dry cells

There is no limit set out in the law or in correctional regulations stating how long a prisoner can be kept in dry cells, although in 2012, the former Correctional Investigator recommended an "absolute prohibition" on putting people in dry cells beyond 72 hours. The CSC added some oversight measures but declined to place a time limit on dry celling.

In June, the current Correctional Investigator re-issued the recommendation and the CSC again declined to place a limit on the measure.

The Elizabeth Fry Society argues that holding a person until they expel something from a body cavity is discriminatory because objects aren't expelled from a vagina, which allows that person to be held in dry cells indefinitely. The group says this discriminates against women and people with disabilities such as mental illness.

It's asking the court to strike down Section 51 of the federal Corrections and Conditional Release Act, which allows prisons to use dry cells if they think an inmate has ingested or is carrying contraband in a body cavity and they're waiting for it to be expelled. The group also wants a declaration that Adams's charter rights have been violated.

Jessica Rose, the Elizabeth Fry lawyer who is representing Adams in court, said her client wants to make sure that the charter rights of people under suspicion of having contraband in prison are respected.

"Right now, with the legislation that we have, that's just simply impossible. That's not going to happen," Rose said.

In a separate civil action, Adams is suing the CSC for damages.

The Ontario Court of Appeal ruled in March 2019 that keeping prisoners in solitary confinement for more than 15 days amounted to "cruel and unusual punishment" and was unconstitutional.

Six months ago, the federal government announced it was discontinuing its attempt to appeal the ruling to the Supreme Court of Canada. Ottawa also said it had repealed the offending provisions and replaced them with a new regime that took effect in November 2019.

The Ontario Appeal Court decision doesn't affect the part of the law that pertains to dry cells, which is why the Elizabeth Fry Society is hoping the court will strike it down.

"It will come up again. It's just a matter of when, and so the court can take this opportunity and set it straight."

The Correctional Service of Canada said in a statement that it can't comment on matters before the courts. However, it said when an offender is placed in a dry cell, "they will be provided the opportunity to retain and instruct legal counsel without delay."

The CSC said legislation and policies don't put a limit on the amount of time an inmate can spend in a dry cell, but the placement must be reviewed by the head of the institution daily.

In a legal brief summarizing its arguments, the CSC admitted that depriving Lisa Adams of liberty in this specific case was "unlawful."

The brief also agreed that there's no reason to think contraband in the vagina would be expelled during detention in a dry cell.

However, the CSC's brief said, whether the detention was legal can be decided on "administrative grounds," and it is not an appropriate use of the court's time to examine charter questions at this hearing.

Lisa Adams said in addition to a re-examination of the dry cells policy, she hopes the case provides an alternate view of people in prison.

"I want the public to see that we are individuals," she said.

"What happens to us in here is important. People wouldn't want it to happen to their mother, daughter, sister, wife. They need to keep an eye on that."