The removal of the statue, which was installed by the Canadian National Railway in 1931, came after increasing controversy over Edward Cornwallis's so-called scalping proclamation that offered a cash bounty to anyone who killed a Mi'kmaw person.

A small group of people played the drums on top of the concrete square Sunday afternoon where the statue of Halifax founder Edward Cornwallis once stood for 87 years.

They're celebrating the statue's removal from the park that's still named after him. Originally the event was going to be another call to remove the statue, but the municipality took down the bronze monument on Wednesday following a 12-4 vote.

"It's very empowering to be here today and to see the statue is removed. It's very moving that our collective voices are so powerful that we're able to move mountains and move statues," said Suzanne Patles, one of the organizers of the rally.

Mi’kmaq activists perform the honour song on the base of what used to be the Cornwallis monument celebrating the statue’s removal <a href="https://t.co/H0yuoW748G">pic.twitter.com/H0yuoW748G</a>

The removal of the statue, which was installed by the Canadian National Railway in 1931, came after increasing controversy over Cornwallis's so-called scalping proclamation that offered a cash bounty to anyone who killed a Mi'kmaw person.

"It's important for us to have the statue removed because white supremacist groups were rallying around the beliefs and ideologies Cornwallis had perpetuated hundreds of years ago," said Patles.

"And we believe the scalping proclamation ... is the seeds of missing and murdered Indigenous women."

A municipal staff report last week recommended removing the statue in the name of public safety.

The report stated there could have been attempts during Sunday's rally to tear down the statue as well as possible violent clashes between protesters.

Last year, on Canada Day, a group of protesters demonstrating in front of the statue was confronted by a smaller group called the Proud Boys. While the confrontation didn't become violent, the incident intensified the debate about the statue.

Kalevi Helppi showed up to the rally to say he was against the municipality's decision to remove the statue.

"I'm a Finn. I'm from Finland and a lot of the things that the Russians did to us in the Second World War are offensive, so I understand. But the point is that it offends me when these statues are taken down and history is erased or rewritten," Helppi said.

Helppi said the municipality should have added a plaque to explain Cornwallis's full history on the site of the statue.

Statue was 'an impediment'

Darlene Gilbert, a Mi'kmaq woman, disagreed with Helppi and argued with him in front of reporters.

"[Cornwallis] was put there ... to remind us and our parents that they had control of us. But you don't have control no more," Gilbert said.

"This is the first step. If you all want to reconcile with us I suggest that you start looking at it open-mindedly and open-heartedly. And the reason we are here today us to get rid of all of this negativity."

Coun. Shawn Cleary, who voted in favour of removing the statue, told CBC News Network "it had become an impediment to building a new relationship with the Mi'kmaq people here in Nova Scotia."

Cleary said while he and other councillors have received a lot of support for voting to remove the statue, there are others who wanted it to stay in place.

"There have been, at the other end of the extremes, a few interactions on social media by email, by phone call, folks that are not terribly pleased with the idea and some that were downright racist. One in particular came to me on Facebook that was a threat to me personally," Cleary said.

Halifax regional council is hoping to restart talks with the Assembly of Nova Scotia Mi'kmaq Chiefs to make recommendations on how to handle other municipal properties named after Cornwallis.

Daniel Paul, a Mi'kmaq elder and author, said the park looks better without Cornwallis. His book, We Were Not the Savages: Collision Between European and Native American Civilizations, helped open the debate about the statue.

"It was part of the hidden history of Nova Scotia. The scalp proclamations, they weren't discussed openly until I came along in the late 1980s and brought them out on the table and said let's have a talk about these," said Paul.

Paul said he has no objection to putting the statue in a museum so long as it has panels around it explaining Cornwallis's full history. He said he would like Cornwallis Park to be renamed Peace and Friendship Park.

"You don't idolize people who, in history, did every attempt to exterminate a race of people, OK? In his case, he did," Paul said.

Benita Bunjun, an associate professor at Saint Mary's University in Halifax, attended the rally Sunday afternoon. She  teaches in the department of social justice and community studies and said the statue's removal was a long time coming.

"To not see the statue there and to witness Mi'kmaq people standing where the statue was is powerful," said Bunjun.

Bunjun said removing the statue is not erasing history.

"There is no erasure here. What it's doing is it's de-centering white settler society and focusing on the people who have been here for thousands of years and some of the laws that were put in place to eradicate them," said Bunjun.

About an hour after the rally ended, a teepee was erected at the park near the site of the statue. 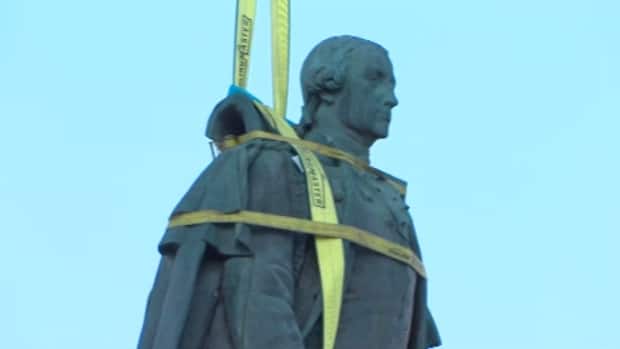 3 years ago
4:33
A statue of Edward Cornwallis, the controversial founder of Halifax, was removed ahead of schedule, turning a planned protest Sunday into a victory rally. A city counsellor who voted in favour of removal explains why this was an important step. 4:33