The controversy over Halifax's Edward Cornwallis statue reached a boiling point this summer as protesters threatened to topple it. Emails obtained by CBC News show that behind-the-scenes discussions between city councillors were also fraught with tension.

Feedback from public, exchanges between councillors suggest there's no lack of opinions in ongoing debate

The controversy over a statue of Edward Cornwallis reached a boiling point this summer as protesters gathered in a downtown Halifax park, threatening to topple the bronze figure. But emails obtained by CBC News show that behind-the-scenes discussions between city councillors were also fraught with tension.

Hundreds of pages of emails related to the Cornwallis statue were sent to councillors and city staff over a two-week period before and after a planned July 15 protest, which ultimately ended with the statue instead being symbolically draped in a black cloth. CBC Nova Scotia received copies of the emails through a freedom-of-information request.

Cornwallis was a military officer and governor of Nova Scotia who founded Halifax for the British in 1749. That same year, he issued a bounty on the scalps of Mi'kmaq people.

The city has had to grapple with the increasingly divisive debate around how to reconcile Cornwallis's significant role in Halifax's history with his brutal past — one that's been playing out across the country about a number of figures in our history books. 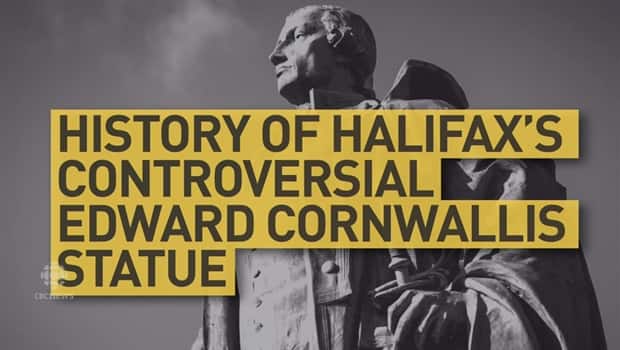 3 years ago
1:49
The controversy over Halifax's Edward Cornwallis statue reached a boiling point this summer as protesters threatened to topple it. 1:49

Ahead of the July 15 protest, concerns were raised about the possibility of vandalism or violence, resulting in Mayor Mike Savage deciding the day before the event to have city workers shroud the statue.

According to an email sent to councillors just after the event, the mayor said the idea had been raised by the protest's organizers. "Much preferable to an attempt to tear it down," Savage wrote.

The move was applauded by Couns. Shawn Cleary, Tony Mancini and Steve Craig, as well as regional Assembly of First Nations Chief Morley Googoo, who sent the mayor a note of appreciation.

"Your leadership today was crucial to ensure our people were not injured or have to encounter another bad experience," wrote Googoo, of Waycobah First Nation.

But a number of councillors were upset that they were not told about the shrouding before it happened. Coun. Tim Outhit said he found out about it by watching a video on his phone in a coffee shop.

"There will be lots of reasons given for why this was done to keep the peace, but the lack of communication to council is disappointing and unusual," he wrote.

Outhit's response created a series of replies that included a heated exchange between Couns. Waye Mason and David Hendsbee. After Hendsbee suggested the tarp should have been "red" instead of black and asked for a "peace pipe," Mason accused his colleague of racism.

"When you use race or ethnic based words that way, it is racist," wrote Mason. "You should seek cultural competency training."

Hendsbee later clarified the red tarp comment, saying the colour reference was actually about the Liberal Party. He also defended himself, saying he grew up in a culturally mixed area and has strong black and Acadian communities in his district.

"I do my best to serve all interests," said Hendsbee via email. "Pick any word and I'm sure it can be dissected any way one wants it to be."

When contacted by CBC News, neither Mason nor Hendsbee wanted to comment further on the emails.

A number of the emails from the public to the mayor and the city councillors over the same two-week period were also strident. None of the members of the public were identified in the documents.

There were 75 emails urging the municipality to remove the statue, calling it a "blight," "offensive" and a representation of "colonial genocide." One insisted Halifax was becoming known as the "Mississippi of the North."

But there were also 33 emails from people opposed to taking the statue down. They called the idea "political correctness gone wild" and insisted Cornwallis was "not the monster" he was being portrayed as. Others were adamant that the municipality should not try to "erase history."

About 15 people suggested compromises: moving the statue to a military museum, the Citadel or Victoria Park. Others thought the statue could stay if the plaques were changed or a new statue was added representing a Mi'kmaq chief or an Indigenous family.

But one email noted that the Cornwallis debate had been an issue for 31 years — and there was no easy answer that would satisfy both sides.

"I personally will never agree that a statue of Mi'kmaq be placed in a shared park with Cornwallis," said the writer, who sent the email to the mayor's assistant on July 12.

Mayor Savage had called for calm in the lead-up to the planned protest, cautioning that knocking down the statue could set back progress on reconciliation efforts with Mi'kmaq people. In an interview with CBC News this week, he again stressed that the process was ongoing.

"I'd like to see a solution that brings us closer together and not further apart," he said. "I'm not naive about what's going to happen. But I think there's an opportunity and, at the very least, we have to try."

Earlier this month, Halifax Regional Council agreed to create an expert panel to deal with the Cornwallis statue, as well the recognition and commemoration of Indigenous history. Panel members are expected to be named in November.

The municipality also plans to hire an Indigenous adviser to be posted within the Office of Diversity and Inclusion.

Pam Berman is CBC Nova Scotia's municipal affairs reporter. She's been a journalist for almost 35 years and has covered Halifax regional council since 1997. That includes four municipal elections, 19 budgets and countless meetings. Story ideas can be sent to pam.berman@cbc.ca