A Cole Harbour man whose granddaughter was hit by a car in front of his house is campaigning for lower speed limits in residential neighbourhoods. 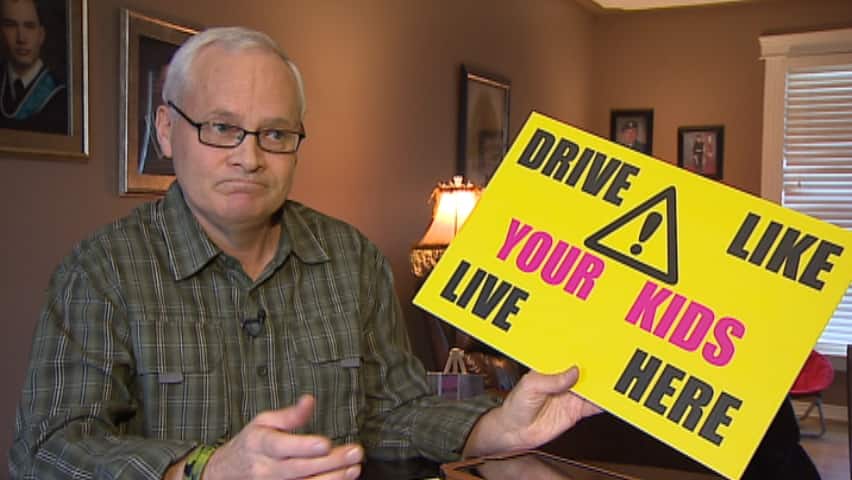 8 years agoVideo
2:00
A Cole Harbour man is campaigning to have speed limits on residential streets removed. 2:00

A Cole Harbour man whose granddaughter was hit by a car in front of his house is campaigning for lower speed limits in residential neighbourhoods.

Don Hill said last fall, his five-year-old granddaughter was playing after school at a friend's house across the street from his Taranaki Drive home.

After looking in both directions, she crossed the street and was hit by a car. Her leg was broken but she is recovering, said Hill.

"It takes 113 feet in braking distance to stop at 50 kilometres an hour," he said.

"That's two and a half houses."

The speed limit on Taranaki Drive is 50 kilometres an hour — Hill wants it to be 40.

"My goal at this point here is to have the province give the municipalities the authority to change speed limits if they feel it is the benefit. It's not to change the speeds on our main arteries," he told CBC News.

"Most people have two cars now and one of them is parked on the side of the road so you've got very narrow streets and you've got cars coming through at 50 kilometres an hour which is way too fast. I just think it would make for safer roads."

Hill has set up a website, contacted municipalities across Nova Scotia and has written to the premier.

He said he'd received an email from Maurice Smith, the Minister of Transportation and Infrastructure Renewal, indicating the department and the provincial road safety advisory committee would conduct a study on whether residential streets would be safer with reduced speed limits.

That study is supposed to be ready in the spring, said Hill.

"New York City has implemented it in 13 areas and have cut their accident rate down to lower than 50 years ago," he said.

On Tuesday, Halifax regional council will be asked to support a letter Mayor Mike Savage is sending the province in support of the speed limit study.