A federal RCMP investigation that involved a dramatic car chase and crash in Halifax Wednesday afternoon has raised questions about whether the methods employed by the police warranted the potential risk to the public.

RCMP saying little about risky pursuit, or why they raided an apartment near a school at dismissal time

A federal RCMP investigation that resulted in a dramatic car chase and crash in Halifax Wednesday afternoon has raised questions about whether the methods employed by the police warranted the risk to the public.

Videos on social media show a car leaving the Highway 102 off-ramp just after 3 p.m. and driving over grass with multiple unmarked police SUVs and trucks in hot pursuit. The vehicle then crossed a sidewalk, drove through rush-hour traffic across the busy Joseph Howe Drive, with police right behind it, sped over a second sidewalk and bounced down an embankment onto Elliott Street.

Witness Sharon Simpson, who lives on Elliott Street, watched as two SUVs pinned the car in an attempt to stop it, and they all ended up landing on a power pole, crashed on a third sidewalk.

She said the entire chase across multiple lanes and up over curbs was a dangerous situation.

"There were people up on the sidewalk who were very lucky. They could have easily been taken out by any of those vehicles," Simpson told CBC Thursday. 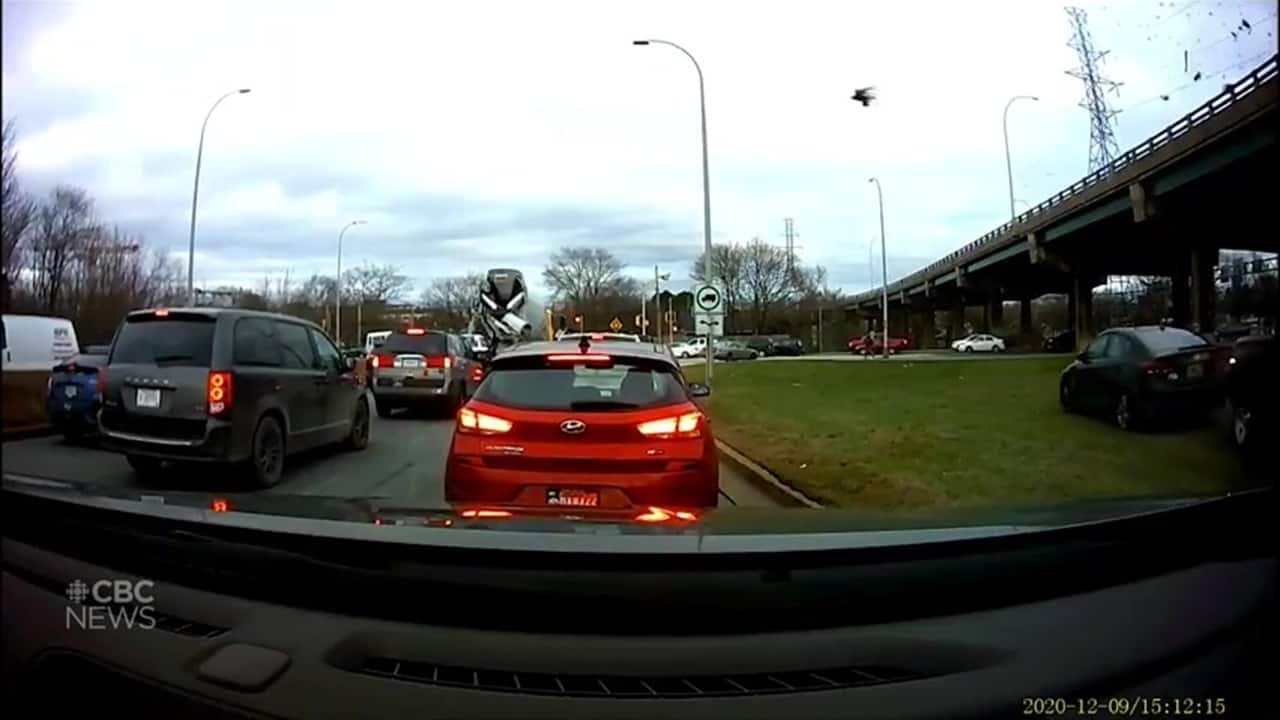 3 months ago
0:39
RCMP in Halifax chase a car off the Highway 102 ramp to Joseph Howe Drive on Wednesday. The Mounties searched 13 sites and arrested multiple people as part of the investigation into organized crime and drugs in N.S. 0:39

The chase was part of a federal RCMP investigation involving organized crime. The RCMP said Thursday that a number of people were arrested after police searched 13 sites across the Halifax municipality.

The car that was rammed allegedly contained a gun and drugs.

The chase was concerning to Christian Leuprecht, an expert on policing with the Royal Military College and the school of policy studies at Queen's University.

"There will need to be clear justification, I think," said Leuprecht. "What were the public safety issues involved? Because the only public safety issue I can see is half a dozen unmarked police vehicles chasing [a car] over green space."

The RCMP stayed largely silent on the matter Wednesday, only saying in a tweet that there was "no risk to public safety." That, too, raised questions for Leuprecht.

"You don't engage in a high-speed chase unless public safety is at risk," he said. "The RCMP's own statement said that public safety was not at risk in this case."

Leuprecht said police forces typically don't engage in high-speed chases because of the risk to the public. He pointed to a case in Quebec where a five-year-old boy was killed during a chase in a suburban area of Montreal.

As of Thursday evening, no charges had been laid in relation to the car chase in Halifax, or any of the other sites investigated by the RCMP. Leuprecht found that odd.

"So we have this sort of pursuit and no charges yet? I'm a bit surprised."

He also said it was unusual that the police vehicles involved in this case were unmarked, and that Halifax Regional Police wasn't involved in this matter, since it occurred within their jurisdiction.

On Thursday, RCMP spokesperson Cpl. Lisa Croteau told CBC's Mainstreet that there was no risk to public safety and there was "extensive planning" that went into the operation.

"Any investigation is fluid, and we can't control every situation, so we do our best," she said. "We try to ensure public and officer safety, and if we believe the risk is great we have the option to stop that at the time, but everything is assessed as it's going on."

She said the police vehicles left the road because the officers were "reporting to the scene as quickly as possible in order to provide backup to the officers that were there."

Car chases 'too great a risk'

According to data obtained by CBC in an access to information request in 2019, seven RCMP vehicles in Nova Scotia were damaged or rammed by a fleeing suspect between 2013 and 2018, which resulted in about $35,640 worth of damages.

Coleman had a long career spanning many police forces, including a stint at the head of the Moose Jaw Police Service in Saskatchewan. Back then, he instituted a policy banning pursuits.

"It was just too great a risk for police officers and the public to engage in these pursuits," he said in a phone interview from Alberta.

"It didn't go down too well with some of the police officers, but I said, 'I don't want to be knocking on your door and explaining to your family that you have been badly injured or worse.'"

When asked what sort of situation would justify a police chase, Coleman said he "couldn't find one."

"Police officers, or sometimes the public, will pose a hypothetical situation — you know, if this is a little girl or a young child that's been kidnapped … I still don't think it's worth the risk," he said.

If police do engage in a pursuit, Coleman said they have a responsibility to justify it to the public.

"Be transparent," he said. "Even without people taking video of it, sooner or later, it's going to come out in the public, and it might not even be the right version at the time it's changed hands a few times."

In addition to the car chase and crash in Halifax, RCMP also raided an apartment building near a Bedford-area high school Wednesday as students were being dismissed for the day.

Anita Kirkbride, whose daughters attend Charles P. Allen High School, told CBC Thursday that she was concerned by the fact that a raid happened with hundreds of students milling about nearby.

"I just can't believe, knowing what was going on now, that they wouldn't do a hold and secure," she said. "I don't know what they thought might happen, but there shouldn't have been people walking around like they were."

The Halifax Regional Centre for Education says the RCMP only informed the school of their operations after students were dismissed.

While Leuprecht said there are circumstances that would justify a situation like that — like if there was an immediate threat like a bomb — it didn't appear that way, since this was part of a long-term organized crime investigation.

"Otherwise, you might either sort of wait for half an hour and do the takedown later, or at a minimum, apprise the school," he said.

Leuprecht believes the whole situation raises questions about the future of the RCMP in Nova Scotia, especially since the province has "very little control" over the RCMP.

"I think Nova Scotians need to ask themselves, are they getting the quality of policing — based on the footage that they've seen — that they should be receiving in terms of RCMP contract policing?" he said.

"And if they believe the answer is no, what are the alternative means of service delivery?"

With files from Amy Smith and Mainstreet