'See you in court' aunt tells nephew after $1.2-million Chase the Ace win

A photo-op to celebrate a $1.2-million lottery win in Nova Scotia turned sour Thursday when two family members feuded over the win.

A photo-op to celebrate a $1.2-million lottery win in Nova Scotia turned sour Thursday when two family members feuded over the win.

Barbara Reddick of Guysborough, N.S., and her nephew, Tyrone MacInnis, posed for the cameras with a giant cheque in Margaree Forks, N.S., after winning the Chase the Ace fundraiser benefitting two local fire departments.

Reddick then pointed at MacInnis and said: "See you in court."

"It was my ticket," she told a group of people gathered for the ceremony. "I bought the ticket and now he's trying to lie and say I said split. I said split with the 50/50, not with no Chase the Ace."

"I'm taking him to court. I'm getting a lawyer tomorrow. Now you can print that." 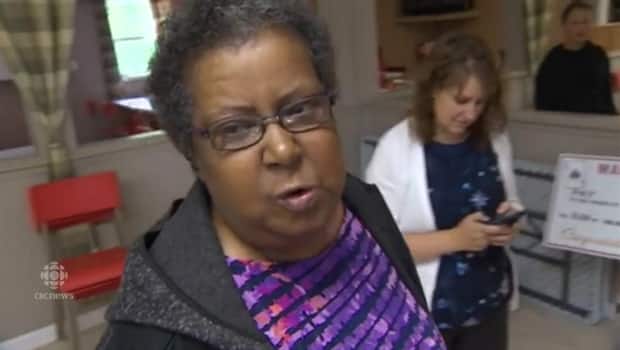 3 years agoVideo
1:21
Barb Reddick says she put her nephew's name on the winning ticket for good luck, but is now threatening to take him to court. 1:21

In order to play, people bought tickets as they would in a 50-50 draw. If their ticket was drawn, they got a percentage of the sales. If they drew the lucky ace of spades, they would win the jackpot.

By Wednesday night's draw, only two cards were left.

Although both names were on the winning ticket, Reddick denied that the two had an agreement.

Her nephew replied: "Yes, we did."

"I put his name on the ticket for good luck because he's like a son to me — he was," she said. "He was lucky, but not for half a million dollars."

The contact number on the ticket was for MacInnis, who lives in Glace Bay, N.S.

Reddick said she had no intention of splitting the winnings with her nephew.

Bernice Curley, chair of the Margaree Forks Chase the Ace committee, said she was floored.

She said because there were two names on the winning ticket, she wrote a cheque for half of the winnings to each person, after checking with province's alcohol and gaming division "to make sure I was allowed to do that. They were perfectly fine with that, that it would make it easier for everyone involved. So I split the cheque evenly."

"I can't really explain it. I didn't expect anything like that to happen," she said. "I just came to deliver the cheques and present them to the winners.

"I'm a little bit disappointed that happened at the end."

Earlier Thursday morning, Curley told CBC's Information Morning Cape Breton that there was a good crowd on hand for the big win.

"The buzz was quite high," she said.

"Everyone was pretty excited to see what was going to happen. Since the jackpot got higher, every week the crowd got bigger."

"I think people in the area got a little frustrated. They're not used to having traffic gridlocked in Margaree Forks, but it was short-lived and it was great to see so many people come to the area."

"For a place that says there's no money, there was money coming into Margaree over the last few weeks. I'm not sure where, but everyone just wants a shot at it [the jackpot]," Curley said.

She said she's been asked if she feels guilty about the money people are spending on tickets.

"I'm not sure. I'm really not sure where that money comes from," Curley said.

"I'm more of a believer that if you weren't giving it to us, you'd be giving it to some other gambling idea."

Rob Currie, who teaches at the Schulich School of Law at Dalhousie University, told CBC's Mainstreet the first thing that needs to be done is find out what rules and regulations are in place for this type of situation.

This would require looking at the rules from the Alcohol, Gaming, Fuel and Tobacco Division of Service Nova Scotia, which handle games of chance such as Chase the Ace.

He said there would also have to be evidence about what the terms of the agreement were; noting that an oral contract is "much dicier" than a written one.

He added that, because this dispute is about more than $25,000, it is too large to be brought to small claims court and it could only be brought to the Supreme Court of Nova Scotia.

"It could cost tens of thousands of dollars to both sides and it could drag on for years," said Currie.

He said there are many disputes known to Canadian law about lottery tickets, and his impression is that none of them end very well.