A Halifax woman who says she was racially profiled during a controversial arrest at a local Walmart earlier this year had all charges dropped against her. Santina Rao was facing charges of causing a disturbance, assaulting a peace officer, and resisting arrest.

All charges laid against a Halifax woman who says she was racially profiled during a controversial arrest at a local Walmart earlier this year have now been dropped.

Santina Rao says the news gives her vindication, but doesn't close the book on the ordeal.

Rao suffered a broken wrist, concussion and bruising in the encounter with police on January 15 at the Mumford Road store. Two days later, video showing parts of the confrontation and arrest started circulating online. 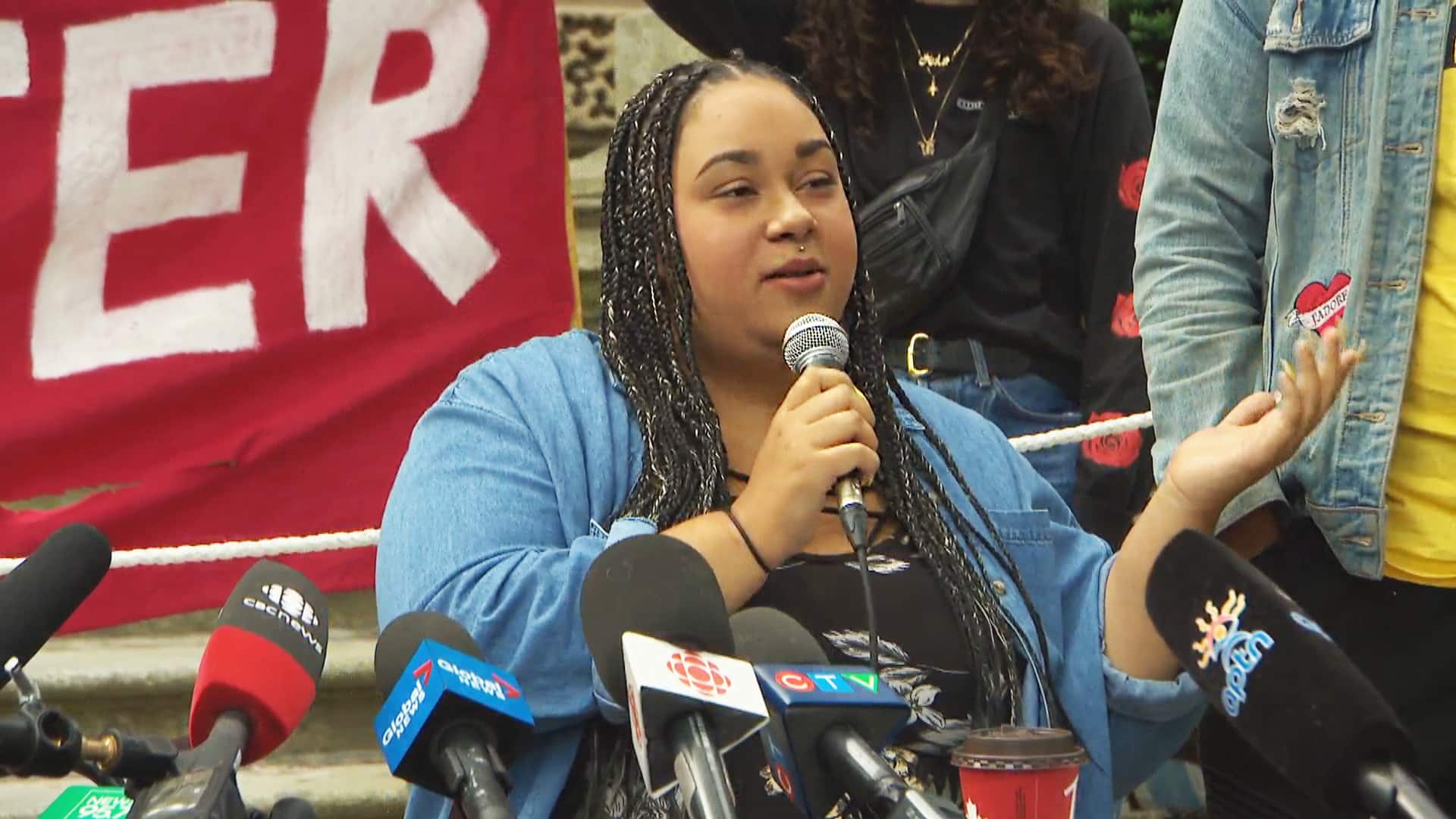 WATCH: Santina Rao, flanked by friends and supporters, says she feels 'so much gratitude' after several charges dropped

5 months agoVideo
10:13
The Halifax woman suffered a broken wrist, concussion and bruising in the encounter with police on January 15 at the Mumford Road store. Two days later, video showing parts of the confrontation and arrest started circulating online. 10:13

Police complaints and lawsuit to come

Rao and her lawyer, Gordon Allen, said they are planning to launch formal complaints with the police force against the three officers who were involved, and civil action against Walmart and the city over Rao's injuries.

Rao said her physical injuries still bother her and her mental health has suffered.

When Rao was stopped and arrested she was shopping with her baby and toddler. She said she was approached by police officers inside the store who accused her of trying to steal a head of lettuce, two lemons and a grapefruit that were in the bottom of her stroller.

The officers also asked her for identification, which she said she showed them. But things escalated when the officers questioned Rao about her identification and one of them stood between Rao and her three-year-old daughter.

The video of the encounter shows Rao swearing at a police officer to get off her before one officer physically brought her to the ground as she struggled against him.

On Tuesday outside the court house, Rao was surrounded by supporters, some of them holding up a huge "Black Lives Matter" banner behind her.

Rao said she broke into tears of joy when she learned about the Crown's plan to drop her charges.

Reasons for dropping the charges

Just minutes before, Crown attorney Jane McDonald-Mills had formally withdrawn the charges, telling a provincial court judge that the Crown had "concerns about a realistic prospect of conviction at this time."

She added that even if those concerns could be addressed, the Crown also assessed whether there was public interest in proceeding with the charges, and concluded there was not.

McDonald-Mills called in to the court house for the hearing and was not physically present, which has been standard practice for Crown attorneys during the pandemic. She was not available for further comment afterward.

In an email, Chris Hansen, spokesperson for the Public Prosecution Service, said the decision followed the Crown's usual two-part test when assessing the viability of a prosecution.

"The decision was not taken lightly and was made in consultation with the Chief Crown Attorney," Hansen said.

Allen said he, too, did not think there was a reasonable prospect of a conviction.

Street checks, in which police collect and record citizens' identifying information, were deemed illegal in Nova Scotia last year after a landmark report by criminologist Scot Wortley confirmed that police officers in Halifax were conducting street checks on Black people at a rate six times higher than white people.

Last October, about seven months after the report came out, Nova Scotia Justice Minister Mark Furey ordered police officers across the province to stop the practice.

Rao's supporters have been lobbying the Public Prosecution Service to drop the charges. The case has also sparked renewed calls for an end to racial profiling by Halifax Regional Police.

More than 53,000 people have signed an online petition calling for Rao's charges to be dropped and for charges to be brought against the officers involved in her arrest.

In an emailed statement, Halifax Regional Police Chief Dan Kinsella said he wanted "to acknowledge the hurt this incident has caused to all involved."

"This is a particularly difficult time for police-community relationships. The vast majority of HRP members serve this community with compassion, respect and an unerring sense of duty to serve. We also recognize there is more to be done and we are firm in our commitment to do better."

Kinsella said he knew the public wanted HRP to look further into what happened in Rao's case, but he would wait for the results of an investigation by the provincial police watchdog, the Serious Incident Response Team (SIRT), before commenting further.

SIRT investigates any time a police officer seriously injures or kills another person. Felix Cacchione, director of SIRT, said he received the investigator's report into Rao's case on Friday afternoon, but he has not yet read it. Cacchione has three months to review the investigator's findings and file his own final report.

The director of corporate affairs for Walmart Canada, Adam Grachnik​​​​​​, said that given ongoing investigations into the matter, they are deferring comment to Halifax Regional Police and SIRT.

"Respect is a core value at Walmart Canada and we do not condone any behaviour which contradicts this value, including racism and discrimination," he said in an email Tuesday.

He said Walmart is committed to providing a safe and inclusive environment for all associates and our customers.

Rao said as of Tuesday, she is still banned from entering all Walmart locations.

With files from Information Morning and Haley Ryan