A cat from Lower Sackville, N.S., has been reunited with its owner more than five months after it went missing. 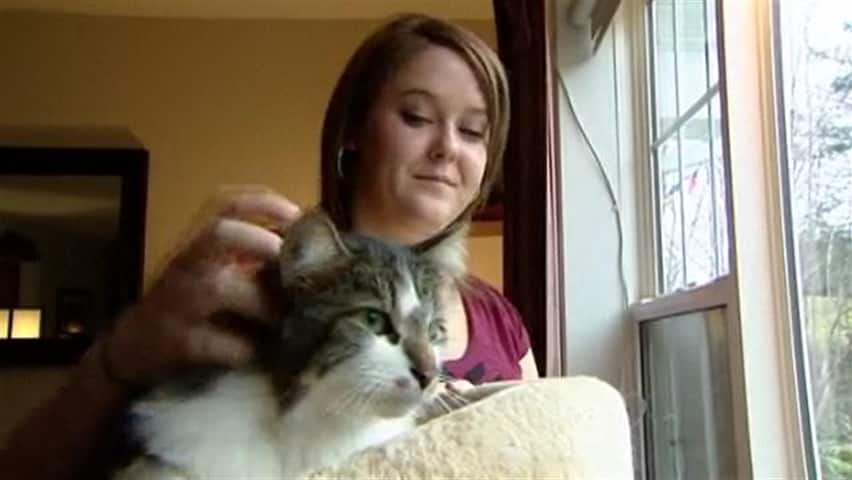 9 years agoVideo
2:08
A cat from Beaver Bank has been reunited with its owner more than 5 months after it went missing. 2:08

A cat from Lower Sackville, N.S., has been reunited with its owner more than five months after it went missing.

Laura LaChance said she and her cat, Tito, were able to find each other earlier this week with the help of a Facebook site dedicated to lost and found cats in the Halifax Regional Municipality and Nova Scotia.

"My birthday came and went and I thought it would be the best birthday present if Tito would just come home. It didn't happen," LaChance said Thursday.

"But it's better late than never. A perfect Christmas present."

LaChance said Tito managed to push open a screen on her balcony and escape from her third-floor apartment in July.

In the desperate search for her beloved cat, LaChance printed more than 800 brochures and 30 large missing cat posters. She offered a $1,000 reward and started scouring lost pet sites online.

"Anybody who knows me knows that it was awful," she said.

LaChance found a Facebook site which was dedicated to lost and found cats in the area, and began checking for new updates regularly.

Tracey Galusha, who started the site, told CBC News her group has almost 1,400 members and they have saved several cats, making sure they're spayed or neutered before finding them new homes.

"I have pets and I don't know what I would do if one was missing," Galusha said Thursday.

She heard about a stray cat hanging out near a hotel close to the Halifax Stanfield International Airport, so she decided to try and rescue it.

Galusha put out a trap and managed to capture the cat. She posted the picture on her Facebook site on Wednesday.

LaChance said she saw the picture and immediately knew it was Tito. She immediately headed to Galusha's house for a reunion.

"Without Tracey and her perseverance and her enormous heart, we never would've gotten him back, ever," LaChance said.

She said she has no idea how Tito made the trek from Beaver Bank to the airport and how he survived alone for more than five months.

Tito has lost weight but LaChance said otherwise, her cat is in good shape.