The captain of a modified boat that required police rescue when it went out of control tells CBC it was a love of speed that did him in. 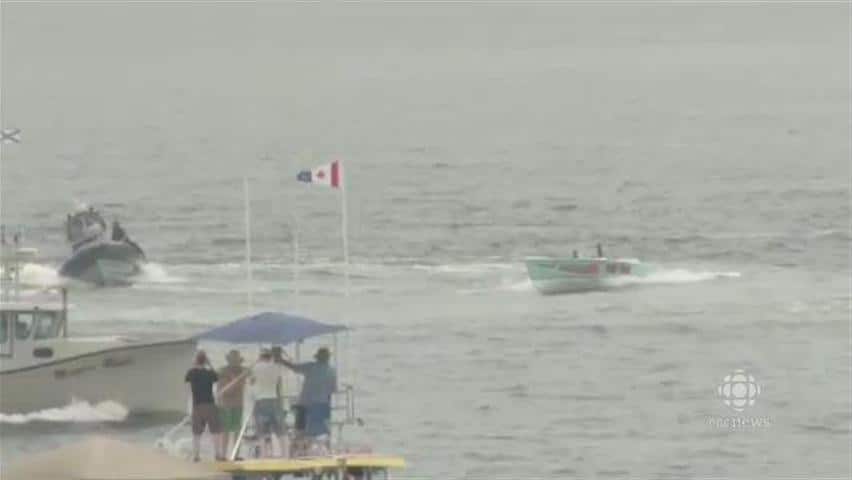 RCMP get their boat

7 years agoVideo
7:02
Video shows a race boat buck its crew and elude RCMP for several minutes before being corralled. 7:02

The captain of a modified boat that required police rescue when it went out of control tells CBC it was a love of speed that did him in.

David McCarthy was competing in the Boat Race at the Pictou Lobster Carnival when he and his crewmate sailed into trouble. The boat was rigged up to go as fast as possible, but it wasn't fast enough.

"The race before, it was a little slow. We thought we could come a little faster," he said.

It went a little too fast and he and his crewmate were bucked overboard. The boat, now with the throttle stuck, zipped in tight circles around the crowded Pictou Harbour all by itself.

The RCMP came to the rescue.

Const. Bryce Haight leapt into the RCMP's Hurricane 733 — a rigid hull inflatable boat. "When it came out of the turn, I could see there was nobody in the boat," he said. "It was going a good clip."

The boat posed a risk to the overboard sailors and the other boats in the harbour. Haight maneuvered alongside the rogue vessel and a sailor was able to jump onboard and get it under control again.

Nobody was seriously injured in the incident.

You can watch the drama, complete with commentary, above, or listen to the full Mainstreet interview.