Licensed practical nurse Darlene White, who works on the COVID-19 unit at Cape Breton Regional Hospital in Sydney, was selected as the first Nova Scotian in line for the vaccine outside Halifax. Vaccinations for residents at Halifax's Northwood long-term care facility have also begun.

LPN Darlene White says she feels the vaccine is safe, welcomes protection as she works in COVID unit 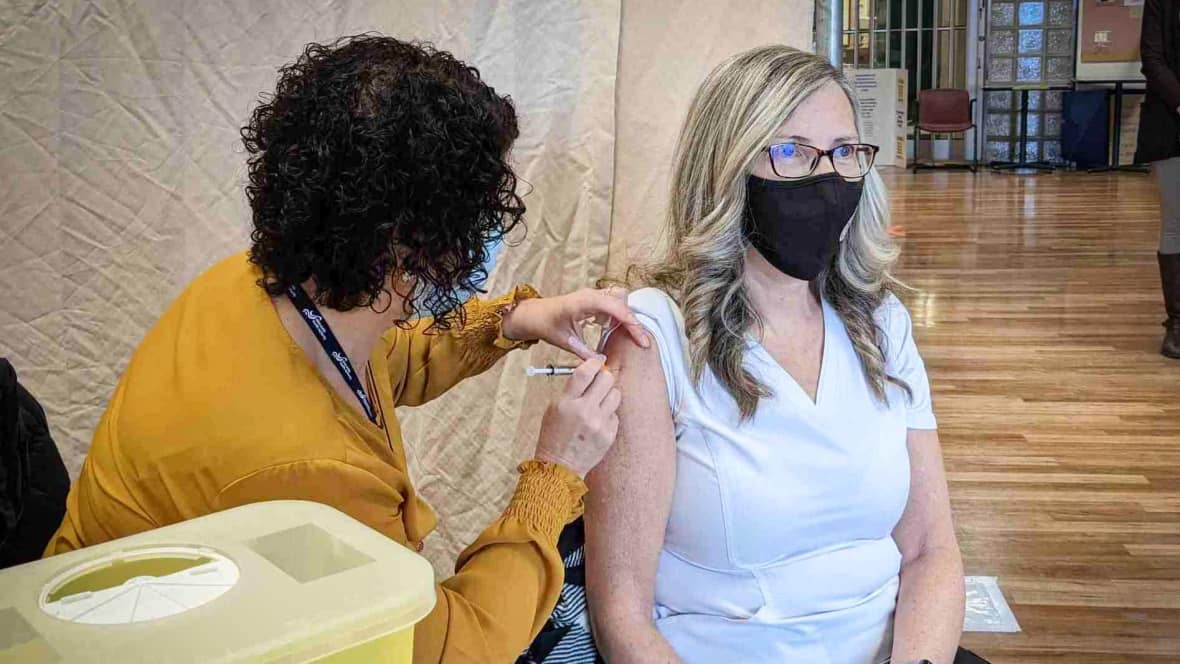 11 days agoVideo
0:31
LPN Darlene White was selected as the first Nova Scotian to receive the COVID-19 vaccine outside of Halifax. White is a nurse on the COVID-19 unit of the Cape Breton Regional Hospital. 0:31

When a surgical unit at the Cape Breton Regional Hospital was converted to a COVID-19 unit at the start of the pandemic last year, Darlene White says she and her colleagues were a little scared by all of the unknowns they were facing.

But when the licensed practical nurse was selected as the first Nova Scotian in line for the vaccine outside Halifax, White didn't hesitate.

"I think it was just excitement, because it was like wow, now I'm hopefully going to be protected from COVID," she said just after getting the first dose in Sydney on Monday morning.

White still needs a second dose of the Pfizer-BioNTech vaccine and said she and her colleagues still need to take precautions.

"It is exciting because hopefully we're going to get back to I guess what we call the new normal," she said. "I don't think we'll ever be back to what we were in past years, but I think this is the first step.

White said staff initially had concerns about dealing with the virus at the start of the pandemic.

"This particular strain of COVID seems to be attacking people a lot quicker, so I think it was really just a lot of the unknown that was kind of scary for us," she said.

However, White said she is not concerned about the safety of the vaccine, which is rolling out less than 12 months after the pandemic hit.

The speed was likely due to an increased focus on the science and less on bureaucracy, she said.

"I feel that a lot of the red tape was probably skipped and I think they probably had their best scientists and best people working on this vaccine all over the world, so I felt comfortable in coming today and actually receiving the vaccine," White said.

Dr. Robert Strang, Nova Scotia's chief medical officer of health, said during Friday's news conference that the timeline for beginning long-term care vaccinations was sped up after the province worked closely with Northwood.

Ann Hicks, 77, was the first resident at Northwood's Halifax location to be vaccinated, saying she was "absolutely delighted."

"I'm really grateful that I'm getting it," she said. "I was on a floor where most of the people had it and I never did get it. I was isolated for about several weeks, but I never ever did get [COVID] ... They were doing their best to keep people safe." 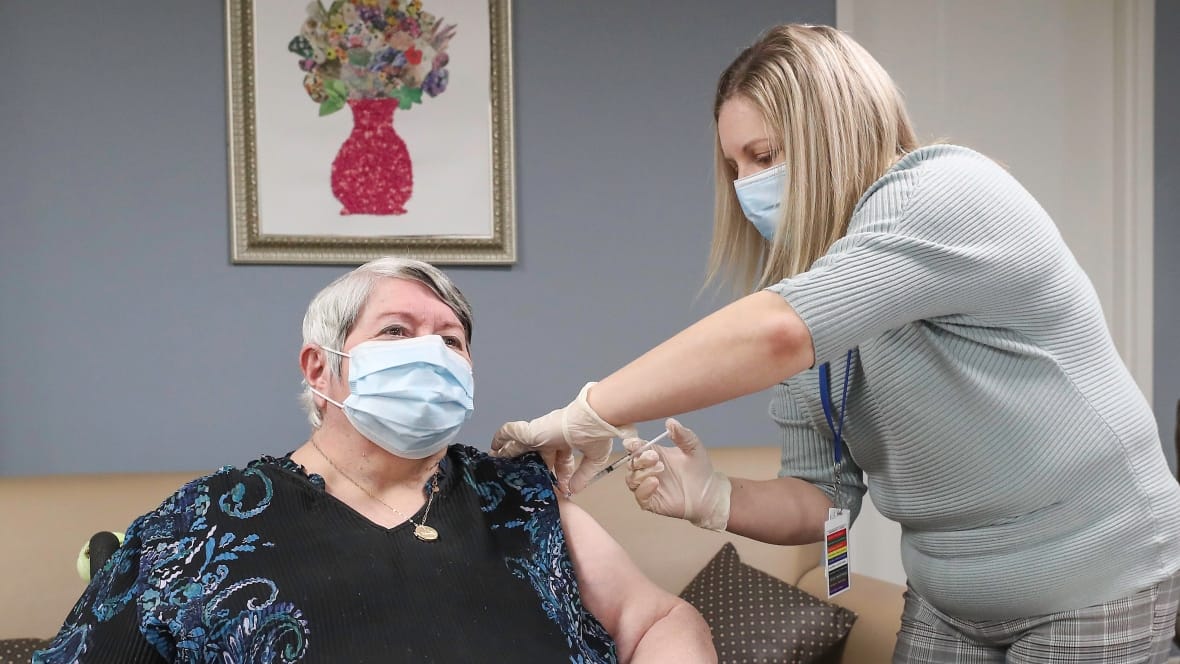 11 days agoVideo
0:58
Ann Hicks was "absolutely delighted" to be the first Northwood resident immunized against COVID-19 on Monday. The executive director for Northwood's long-term care program, Josie Ryan, says all residents at the Halifax facility should be vaccinated this week. 0:58

All Northwood residents in Halifax and Bedford are expected to receive the Moderna vaccine by the end of the month. Of Nova Scotia's 63 deaths related to coronavirus, 53 of them were at Northwood.

Strang also said on Friday that the province is working with Shannex Parkstone and Ocean View Continuing Care Centre to start immunizing staff and residents in the days to come.

Josie Ryan, executive director for Northwood's long-term care program, said the Halifax site should be completed in the next few days and there will be between 100 to 150 residents vaccinated each day.

"It gives us a sense of safety, especially after what we went through in the spring," Ryan said. "It gives staff a little bit of, I think it's pride right now in being able to give out the vaccine so fast."

Ryan said the current COVID procedures at Northwood will stay the same for at least the next six months despite the vaccinations, "just in case." 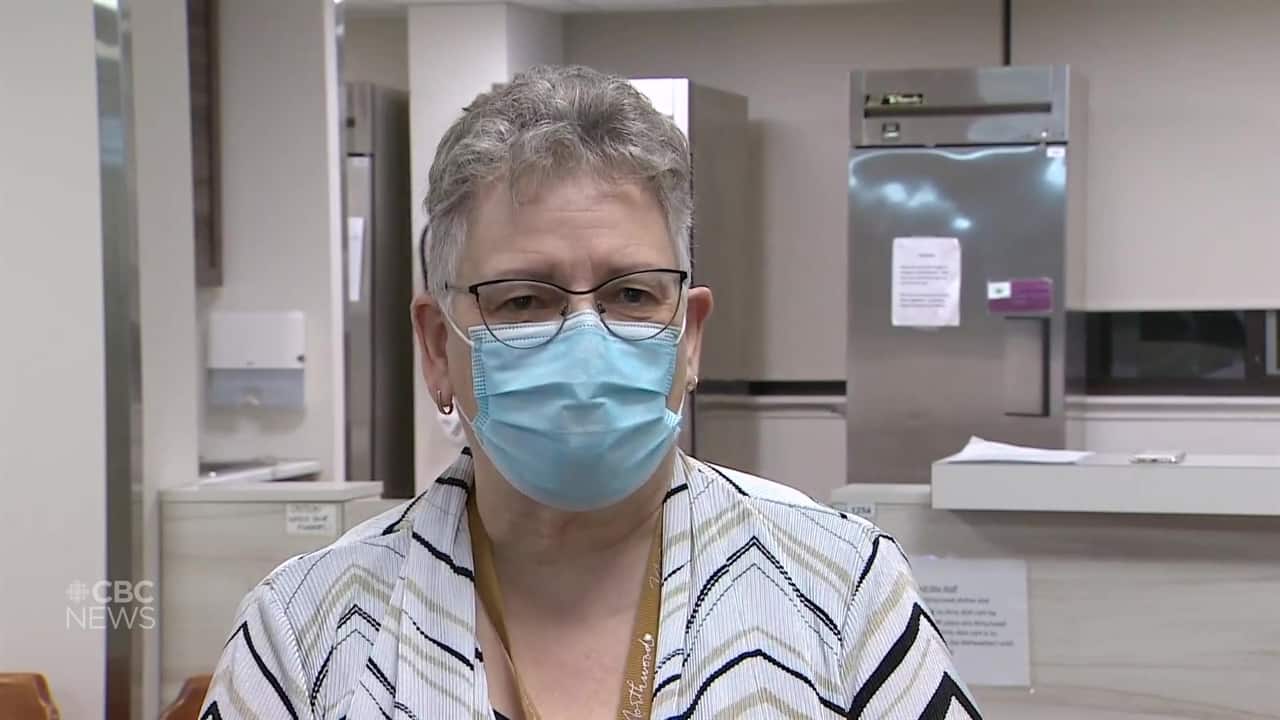 11 days agoVideo
0:14
Josie Ryan, executive director for Northwood's long-term care program, is pleading with all Nova Scotians to get the COVID-19 vaccine. Last year, there were 53 Northwood residents who died in relation to the virus. 0:14

Nova Scotia plans to vaccinate three-quarters of the population by the fall in three phases.

The first phase includes those in the highest-risk groups, including all staff and residents in long-term and residential care, adults over age 75 and health-care staff who work directly in patient care.

The first vaccinations in the eastern health zone — the first area outside Halifax — are being provided using 3,900 doses of the Pfizer-BioNTech formula.

Strang told CBC's Information Morning Cape Breton the Pfizer-BioNTech vaccine has to be stored in special freezers, one of which is installed at the Cape Breton Regional Hospital, so that's why the first vaccinations will all be done there.

The Moderna vaccine does not require special temperature controls, so it will be rolled out into long-term care homes across Cape Breton soon, he said.

"That vaccine is able to be transported a little easier and we're still working out the details with different long-term care facilities," Strang said.

A Halifax nurse was the first person vaccinated in Nova Scotia back on Dec. 16. By the end of this week, the province will have received 23,000 doses — enough to immunize 11,500 people.

As the vaccine rolls out across the province, older seniors living in the community outside care homes will be done in March or April, said Strang.

The first phase includes doctors and nurses in hospital directly dealing with COVID-19 patients, plus cleaning and other staff, he said.

"We're starting ... with all front-line health-care workers who might be exposed, but when we are talking about the staff in COVID units, it's not just the nurses and the doctors. It's other people who are working in that unit, whether it's the cleaners or others."

The second dose will be administered within 21 to 28 days, Strang said, and will be given in hospital by nurses.

Phase 2 is expected to start in May for any remaining health-care and essential workers and the final phase will be in late spring or summer for anyone in the general public who has not yet been vaccinated.

Community and long-term care vaccinations will need community-based clinics with more staff, including nurses, doctors, pharmacists and others trained to give needles.

"Our first priority has been planning this first phase, the first 90 days, and we're just now starting to work out the details of what these community clinics would look like, but there will be a range of health-care providers," Strang said.

Community clinics will also need volunteers to help run them, but it will take time to get those organized, he said.

"People are going to have to be patient," Strang said. "We are going to get to people, but it takes time to do that and part of that is driven by the amount of vaccine that we have at any one time."

Strang said safety protocols and restrictions will last into the future, even as the vaccine rolls out widely.

"A vaccine is not a panacea or a silver bullet," he said. "It doesn't solve everything. We're going to have to continue at least for the next few months. Until we understand more about what is the long-term immunity of the vaccine and we get more people immunized, we're going to have to stick with all our personal COVID precautions.

"Fortunately, we're less restrictive than virtually anywhere else in the country, but if we need to have the broader restrictions that we have used and are using, we'll have to continue to use those. The vaccine doesn't solve everything, especially overnight."

Strang said some people have questioned the safety of the vaccines, but there have only been three or four adverse reactions in Nova Scotia so far. None has been a major problem and none was necessarily caused by the vaccine, he said.

People getting the vaccine may have a sore arm and fever and possibly might feel unwell, but Strang said the COVID vaccines have gone through rigorous safety processes and are likely as safe as any other vaccine. Long-term effects are currently unknown, he said, but likely to be the same as other vaccines.

Tom Ayers has been a reporter and editor for more than 30 years. He has spent the last 16 years covering Cape Breton and Nova Scotia stories. You can reach him at tom.ayers@cbc.ca.