The class-action settlement — stemming from a lawsuit alleging that Microsoft and Microsoft Canada were involved in a conspiracy to illegally increase prices — amounts to about $400 million for those who purchased Microsoft PC software between 1998 and 2010. 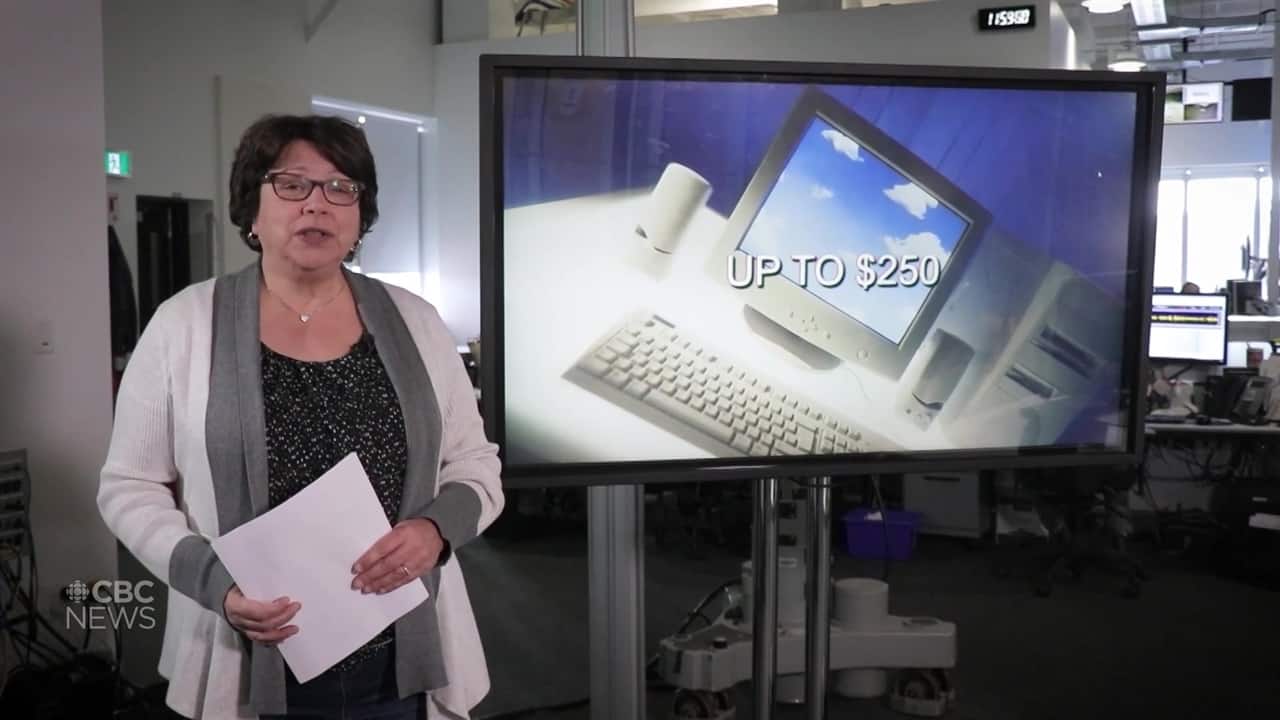 1 month agoVideo
2:21
One of the largest class-action settlements in Canada could be worth money in your pocket. 2:21

One of the largest class-action settlements in Canada could be worth money in your pocket. And depending on the size of your claim, you may not need to provide proof of purchase. Unlike some other class-action lawsuits that require reams of paperwork, the application process is easy.

"We did our best to make it really simple," said Naomi Kovak, a Vancouver lawyer with Camp Fiorante Matthews Morgerman LLP, one of the firms administering the settlement stemming from a lawsuit alleging anti-competitive behaviour against Microsoft.

The settlement, which is capped at $517 million, amounts to an estimated $400 million for consumers after legal fees and expenses are deducted.

Since the application period opened on Nov. 23, Kovak said, more than 100,000 people in Canada have filed claims. Claims can be filed via a website, ThatSuiteMoney.ca.

The agreement allows consumers in Canada, without receipts, to claim up to $250 for their Microsoft PC software, such as Windows, Office, Word, Excel or MS-DOS, purchased between Dec. 23, 1998 and March 11, 2010.

"That's in recognition that not very many people are going to have proof of purchase going back to products they purchased in 1998," Kovak said.

Consumers who purchased a Dell desktop computer, with a Microsoft operating system and an Office suite, during the years specified in the settlement can make a claim for each of those products, she said.

The class-action lawsuit alleged that Microsoft and Microsoft Canada were involved in a conspiracy to illegally increase prices for the company's products. Microsoft agreed to the settlement but denies any wrongdoing and has not admitted liability.

The settlement in Canada has been a long time coming: The first documents in the case were filed in British Columbia in 2005. The class action was also filed in Ontario and Quebec, but the court in B.C. took the lead. The settlement was approved in the B.C. Supreme Court in 2018, and courts in the other provinces also issued their approval. It applies to people in all provinces and territories.

Kovak said that in the 1980s and '90s, Microsoft was "very dominant" in the world of personal computer software.

"They got in trouble in the U.S. with the Department of Justice for what was said to be anti-competitive conduct, and that is the same conduct that was at issue in this lawsuit," she said.

The breakdown for consumer payments was approved by the courts. People with MS-DOS and Windows operating systems can claim $13. Those with the Microsoft Office productivity suite are eligible for $8, while consumers with Excel, Word and applications other than Office can claim $6.50.

While the dollar amounts are small, it's possible people purchased multiple computers over the time period covered by the settlement. Consumers can file a separate claim for each of the software applications on each desktop or laptop that used eligible Microsoft products.

Applicants must also submit a sworn declaration that the claim is accurate.

For individuals with a claim of more than $250, proof of purchase is required for any amount over that figure.

Companies that bought software licences in volume can file claims of up to $650 without receipts, although any claim above that amount must include proof of purchase.

Since the settlement was approved in 2018, a number of details have had to be worked out, including hiring an administrator, determining the claims process and producing advertisements as a way to notify the public.

Canadians are being made aware of the settlement through radio, TV and internet ads, as well as web banners. They have until Sept. 23, 2021 to file a claim. After that date, the administrator will begin to send out cheques to individuals and vouchers to those who bought the software licences in bulk.

Court-approved legal fees of roughly $100 million will be deducted from the settlement, as will the cost of ads. When approving the settlement and fee arrangement in 2018, B.C. Supreme Court Justice Elliott Myers said it applies to "virtually any non-Apple personal computer user since 1998."

After the claims are paid, some elementary and high schools, as well as post-secondary institutions, in Canada will be able to claim vouchers to purchase software with any remaining money from the settlement.

The agreement says schools with students from kindergarten to Grade 12 will be prioritized based on those that "are underserved and/or would benefit from increased student access to computer learning."

Any money that isn't claimed will be returned to Microsoft.