A message of peace from the eight-year-old boy killed in the Boston Marathon attack has inspired a group of Haligonians to help the survivors. 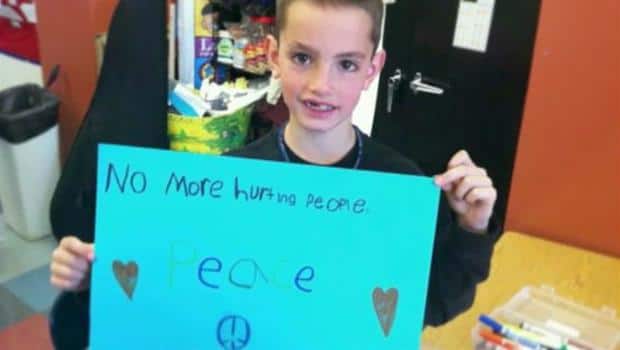 8 years agoVideo
1:51
A group of Haligonians created this video to promote their fundraising efforts for Boston bombing victims. 1:51

A message of peace from the eight-year-old boy killed in the Boston Marathon attack has inspired a group of Haligonians to help the survivors.

Martin Richard was one of three people killed when two bombs went off near the finish of the marathon. His mother and sister were badly injured in the blast.

Since his death, a photo of Martin holding a school project has become a symbol of the attack. The image shows Martin's drawing that reads "No more hurting people. Peace."

That message struck a chord with Matt Brannon and Jeremy Cormier of Halifax. The pair came up with the idea to sell t-shirts with Martin’s drawing as a fundraiser. They hope to raise at least $25,000 for the victims of the tragedy.

Brannon and Cormier enlisted some friends to help create a short video to spread the message.

"Martin was killed in the Boston bombings and cannot continue his message of hope. But we can," the video says.

"Me and Matt just sat down and thought about it and said why don’t we just try this," said Cormier. "We have the right ingredients and if it works, then great."

Another part of the group's motivation is Halifax's deep connection with Boston.

Boston rushed to the city's aid after the Halifax explosion in 1917 destroyed a large part of downtown.

To this day, Halifax sends Boston a Christmas tree as a symbol of its gratitude.

"The response Boston showed after that explosion was amazing," said Brannon.

"The fact that they sent supplies, relieved our aid workers, that was wonderful. For me, I've always felt a connection between our city and theirs."

The Haligonians raised more than $6,000 with their t-shirt campaign by Tuesday evening. One-third of the money will go directly to Martin Richard’s family. The rest will be donated to other victims’ families.

Other people are now on board, helping Brannon and Cormier. Melodie Joy’s son appears in the video. She said it's never too early to teach young people the value of helping others.

"I’m the mother of a little boy," said Joy. "So that obviously tore at the heart strings, and I just felt compelled to do something."