Fire crews were at a storage facility off Windmill Road Wednesday morning, battling flames as they consumed several boats. 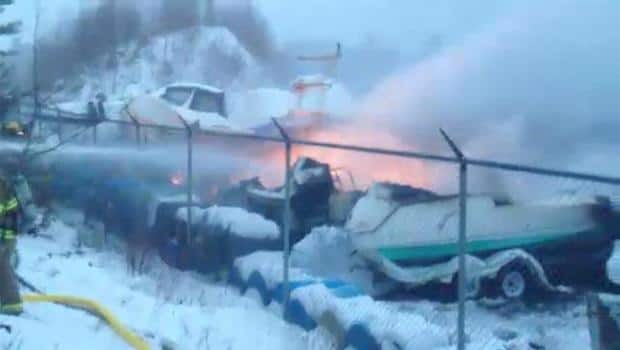 Scot Shaffner, a divisional commander with Halifax Fire, said the fire was first spotted by a snow plow driver. Fire crews arrived to find flames shooting from the boats.

"Luckily, our first piece of apparatus here - as you can see - is an aerial device," said Shaffner. He said crews used the tall ladder to get on top of the fire. "That saved the day."

Roughly 20 boats, small watercraft and trailers were destroyed. The facility has nearly 150 boats in winter storage, and Shaffner said there could have been a different outcome with so much fiberglass in one setting.

"These boats are very flammable," he said. "Once they get rolling, it's very hard to put out."

There was no word on the cause of the fire. Investigators are trying to determine which boat began burning first.

Police were also on the scene, trying to determine if anyone was seen at the facility before the fire started.

Fire investigators said the boats were not attached to a power source.

A security guard told the CBC's Phonse Jessome the boats are owned by private owners and stored through the winter.