A winter blizzard that wreaked havoc in parts of Ontario and the Maritimes over the weekend hit Newfoundland and Labrador on Sunday.

33 cm of snow, 100 km/hour wind gusts in parts of Newfoundland 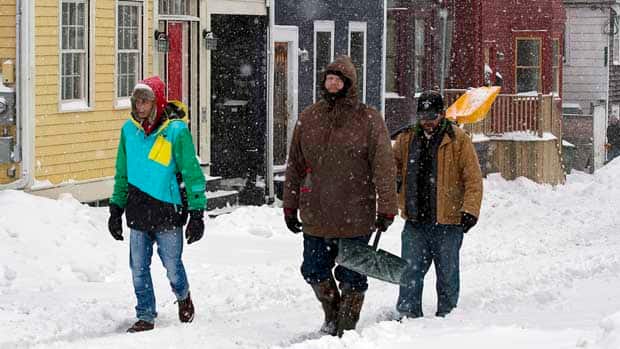 8 years agoVideo
2:47
The second wave of a major snowstorm was battering Atlantic Canada on Sunday. 2:47

A winter blizzard that wreaked havoc in parts of Ontario and the Maritimes over the weekend hit Newfoundland and Labrador on Sunday.

Blizzard warnings are still in effect across parts of the island.

Central Newfoundland was hit with 33 centimetres of snow over the weekend, said Environment Canada meteorologist Jeremy March, and was expecting up to another 20 cm as snow continued to blow in.

St. John's received 23 cm of snow, some of which started to melt later in the day as warmer air and fog rolled in. March said the area was expected to get more snow and freezing rain as the storm pushed through.

Wind gusts of more than 100 kilometres an hour were expected to pummel the country's easternmost province after ripping through parts of the Maritimes Saturday.

March said Nova Scotia got some of the worst winds, with many places seeing winds upward of 140 kilometres per hour. A spot just east of Yarmouth in the province's west was hit by extreme gusts that reached 164 km/h, which count as category 2 hurricane winds, March noted.

The system is a hybrid of a storm that dumped 20 to 40 cm of snow in southern Ontario on Friday and a low pressure system that raged up the U.S. eastern seaboard, March said.

"The two in combination became a really intense low (system) just off the coast of Massachusetts ... that did a lot of damage across the New England states. Eventually it pushed a ton of snow and wind across the Maritimes and now it's in Newfoundland," he said.

"Living in Eastern Canada, we're always prone to getting these big storms."

March says the Newfoundland blizzard should be the last gasp for the hybrid storm.

Access to that province over the Confederation Bridge from New Brunswick was restricted due to high winds. Motorcycles and high-sided vehicles including trucks, tractor trailers, recreational vehicles and buses were turned away Sunday afternoon.

In Nova Scotia, slippery conditions on the Trans-Canada Highway led to six collisions in barely about one hour, the Mounties said.

Nova Scotia Power said more than 20,000 customers were without electricity at one point on Saturday, but by early Sunday morning all but a handful had been re-connected.

In southern Ontario, the weekend of clear skies that followed Friday's snow dump was expected to be followed by a new system bringing warmer temperatures and rain — potentially freezing rain in some central areas — later Sunday.

The "mixed bag" of precipitation will arrive in the province's east on Monday, March said.

"In the middle of winter you can expect anything," he said.

In Toronto, which saw roughly 30 cm of snow, there was chaos at Pearson airport with numerous flight disruptions, creating a ripple effect across the country.

Air Canada warned Sunday it was still "recovering" from a backlog of delays and cancellations caused by the storm. More than 40 flights were cancelled Sunday, while many other trips were delayed.

The airport's Park'N Fly issued an apology and refunds after lengthy wait times for travellers trying to retrieve their cars.

It was a different story on Canada's west coast where rising temperatures had some Canadians thinking of spring.

In Vancouver, temperatures were at 5 C and creeping towards spring-like conditions that appeared likely to soon begin coaxing the first buds.

At mid-day, bright sunlight was reflecting off glass apartment buildings in the downtown core as groups of friends wearing toques matched with sunglasses and open jackets strolled down the street.

Many people were preparing to spend some time outdoors on Monday for the province's first-ever Family Day holiday.

But the city and provincial capital of Victoria, on Vancouver Island, were both expecting drizzle for much of the coming week even as the temperatures were forecast to continue to rise.

Meanwhile people in the Maritimes barely had enough time to finish the back-aching job of digging themselves out after upwards of 40 centimetres of snow fell on Saturday before blowing snow brought it all back.

Cape Bretoners are still feeing the effects of the storm, but it calmed in the Halifax region before noon.

Murray Murphy walked through the snow to get his morning cup of tea in Sydney.

"It's a bad one and more coming. [I'll] probably go back home again and wait her out,"  he said.

The lights are back on in the Maritimes. But in Newfoundland, residents on the Burin Peninsula, as well as the Bonavista Peninsula, are experiencing power outages.

This comes after thousands of power outages, dozens of flight cancellations and flooding shut down most businesses and services in the Maritimes on Saturday.

"There was some very, very strong winds down in the tri-county area. Digby reported a peak wind of 140 and south of Yarmouth in Woods Harbour they recorded a peak wind of 164 kilometres an hour, which is the wind you'd expect from a category two hurricane."

With files from the CBCNews