The woman nicknamed the "Internet Black Widow" for her ability to persuade grieving widowers to marry her has been charged with attempted murder in Nova Scotia.

Melissa Weeks, 77, accused of trying to poison her new husband 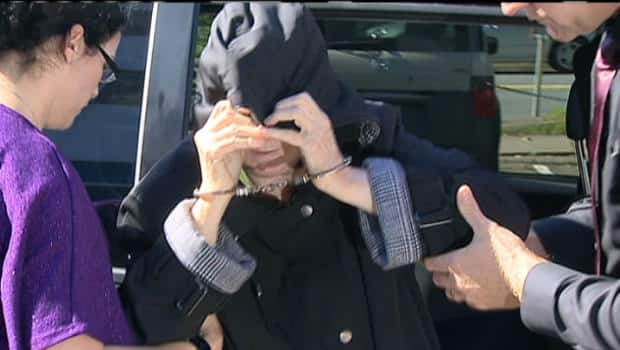 8 years agoVideo
2:59
The woman nicknamed the 'Internet Black Widow' for her ability to persuade grieving widowers to marry her has been charged with attempted murder in Nova Scotia 2:59

The woman nicknamed the "Internet Black Widow" for her ability to persuade grieving widowers to marry her has been charged with attempted murder in Nova Scotia.

Melissa Weeks, 77, is also charged with attempting to poison her husband under Section 245 of the Criminal Code, known as "administering a noxious thing."

She was remanded in custody in Sydney on Tuesday until a bail hearing scheduled for Friday.

Weeks, who was formerly known as Melissa Friedrich, was found guilty of killing a previous husband and has spent time in jail for stealing from a man she was living with in Florida, CBC News has confirmed.

Prosecutor Dan MacRury said the Crown will be opposing her release Friday.

"The Crown is opposed to her release because of the seriousness of the charge and also because of the criminal record of the accused in this case. We are of the view that one, there is the likelihood that she may commit other offences and also that we believe she may be a flight risk," he said.

Fred Weeks, 75, was taken on Sunday to the North Sydney General Hospital, where doctors became suspicious and called police.

"Further investigation led police to believe the man's spouse could be responsible for his illness," Desiree Vassallo, a spokeswoman for the Cape Breton Regional Police, said in a statement Tuesday.

The man has since been released from hospital.

The woman best known as Melissa Friedrich has a long history with the law. In 1991, she killed her husband — Gordon Stewart, of P.E.I. — on a deserted road near Halifax. He had been heavily drugged when she ran him over twice with a car.

She was sentenced to six years in jail for manslaughter and was released after serving two.

Kate Reeves, Stewart's sister, told CBC News on Tuesday she was not surprised to hear her former sister-in-law was in the news again.

"I'm not surprised at all that she's done this. I was surprised that she was caught," Reeves said in a phone interview from Freetown, P.E.I.

"She had a long list of convictions before she ever met my brother, before we ever heard tell of this woman. She had a long criminal history, a lot of charges: forgery, fraud, misrepresentation, theft. When you get a lot of charges like that, I think there are as many incidents that people don't bring forward."

Shortly after being released from jail, Melissa Stewart —  as she was known at the time — travelled to Florida, where she met Robert Friedrich at a Christian retreat.

They married in Nova Scotia in 2000, but a year later Friedrich family noticed his health was faltering. He had mysterious fainting spells, slurred his speech, and was in and out of hospitals. They also said his money had started to disappear.

Friedrich died in 2002 of cardiac arrest. No one was charged in his death.

'A little bit old to be playing games'

Melissa Friedrich's next Florida love affair was with Alex Strategos, a divorced man she met on AmericanSinglesDating.com. On the day they moved in together, he was taken to hospital after hitting his head.

Strategos, now 81 and living in Pinellas Park, Fla., said he wasn't surprised to hear about the latest allegations against the woman known as the "Internet Black Widow."

"I just think she's a little bit old to be playing games, that's all," he said Tuesday.

"She's a nice woman, she treated me all right until she started giving me drugs."

Strategos wound up being hospitalized eight times over a two-month period. A drug was found in his system, and his bank account was emptied.

For that incident, Friedrich was sentenced to five years in a Florida prison on three counts of grand theft from a person 65 years or older, two counts of forgery and two counts of using a forged document. Police said she coerced Strategos to give her power of attorney and then she siphoned off his money into her own bank account.

She was released from jail in 2009 and deported to Canada, where she settled into an apartment in New Glasgow, N.S.