The Cobequid Wildlife Rehabilitation Centre in Hilden, N.S., has had eight owls hit by cars brought to them in the last week, along with a young black vulture that would normally have migrated.

It's almost a full coop at the Cobequid Wildlife Rehabilitation Centre these days.

The non-profit in Hilden, N.S., is housing 13 owls, six eagles and a young black vulture. The vulture is rare in Nova Scotia.

"They're not really from here normally. They do hang around with turkey vultures and we think that he probably missed his migration," said operations manager Brenda Boates.

"He's not flying right now. We don't know why, but we're going to find out."

Boates said they had one other black vulture two years ago, but haven't seen another since.

But the young vulture isn't the only new addition staying at the wildlife rehabilitation centre.

In the last week, the organization has had eight owls brought in after being hit by cars. 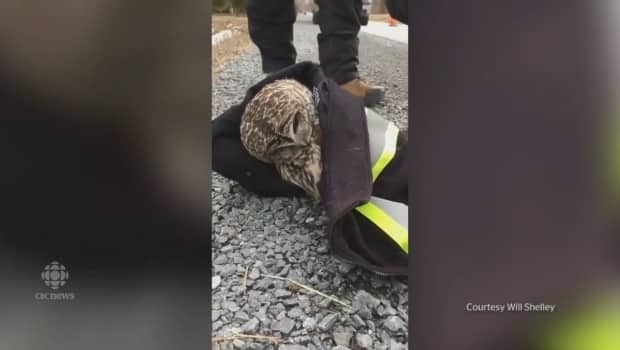 4 years ago
0:58
An owl was brought to the Cobequid Wildlife Rehabilitation Centre in Nova Scotia after a work crew managed to rescue it from the side of a road. 0:58

Boates said one reason they're seeing so many right now is because of daylight time — which puts feeding time for the owls at the same time as rush hour.

"So there are more cars as the owls are hunting. The other issue is people throwing garbage out of their cars."

Boates said even something like an apple core will draw mice and other rodents to the side of the road. That draws in predator birds.

Her advice for drivers is to slow down and keep an eye out.

"We all tend to watch straight ahead, but you have to watch the side of the road. If you see roadkill, there's probably going to be predators on it," she said.

The owls have come from all over the province. The young black vulture was brought from Sydney.

"The fellow that found him on his property saw him try to land on a tree and then he fell down," Boates said, adding that the man eventually called the province.

They still aren't sure why the vulture isn't flying.

"We can't find anything wrong with him yet but he's going for X-rays next week," she said.

Boates calls the bird "he" but isn't actually certain of the sex. The only way to know for sure is with a blood test.

The vulture will stay in the nursery enclosure until they can figure out what's wrong. Then, after it no longer needs medication or close examination, it will be moved outside to a larger enclosure.

"He won't have the ability to fly back home to the southern states on his own and he's going to stay here. We'll feed him and take care of him."

Keeping so many of these birds during the winter is expensive. The non-profit relies on volunteers and donations entirely.

While some of the birds are already fit to be released, they won't be flying the coop anytime soon.

Boates said they now have to wait until the spring in order to give the animals the best chance of survival.

In the meantime, they limit human interaction as much as possible.

"Because we're all about releasing back to the wild, we have to keep their wild inclinations intact," she said.

Boates said if people do hit a bird while driving, the best thing to do is pull over and make sure it's still alive. If it is, people can pick it up in a towel or a blanket and contact the Department of Lands and Forestry or a wildlife rehabilitator.​