Xander Rose, whose mother says he's bullied at school, was accompanied today to his Cape Breton school by a couple of hundred motorcyclists. 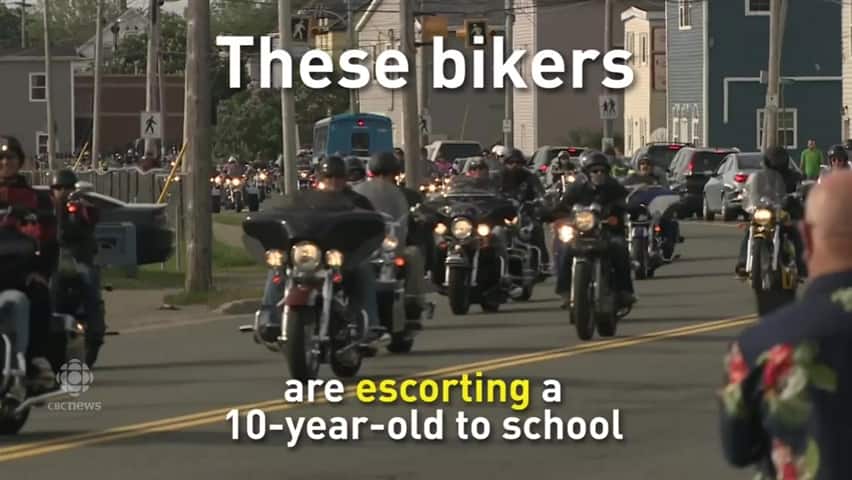 Xander Rose had the ride of his life today.

The 10-year-old Cape Breton boy hitched a ride on a motorcycle and was accompanied by about 200 bikers as he made his way from his home to Harbourside Elementary in Whitney Pier, N.S.

Xander's mother, Katie Layboldt, said her son has been the target of bullies since the beginning of the school year and received death threats over the winter.

Flanked by bikers from across Cape Breton and wearing his own custom leather vest, Rose walked into the school on Wednesday with a big smile.

This school year, there have been three suicides of young teens in the Cape Breton-Victoria Regional School Board. The parents of one teen have said their daughter was bullied.

Layboldt said she didn't want her son to "become another on that list." She had reached out to the school, social agencies, politicians and police, but felt she was getting nowhere with her son's bullying.

That's when she contacted a U.S.-based bikers group called Defenders of Children. The group then contacted bikers in Cape Breton who arranged Wednesday's ride.

"Hopefully, he'll know that he has support outside the school," said Layboldt, "and there are people who value the good things in him, and it's not constantly a negative."

Basso said the bikers will be happy to accompany any student who's feeling threatened.

"We want the kids to know they're safe going to school," said Basso. "We are going to provide them with a wall of leather and steel."