Fisheries and Oceans Canada is warning people to stay away from a beluga whale spotted in the waters of Halifax Harbour this week. 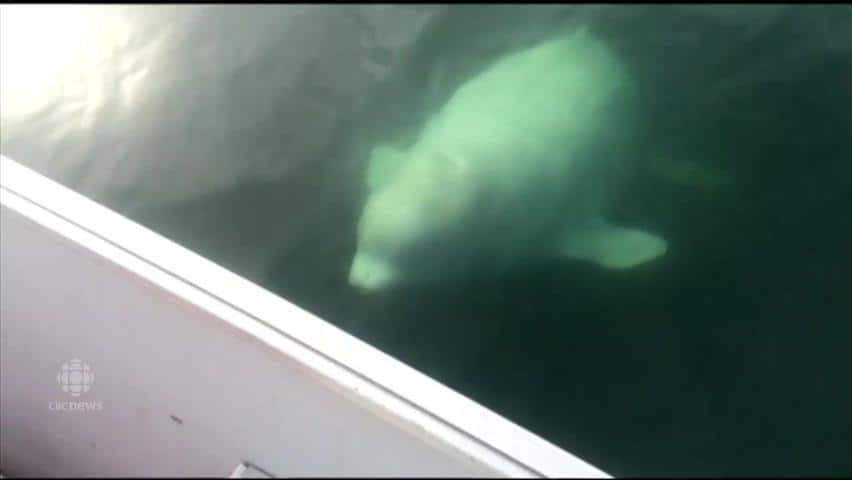 5 years agoVideo
0:44
Jamie Osborne says he was surprised to see a flash of white in the water. 0:44

Fisheries and Oceans Canada is warning people to stay away from a beluga whale spotted in the waters of Halifax Harbour this week.

Marine Animal Response Society co-ordinator Tonya Wimmer said the whale was first spotted near Eastern Passage on Monday evening. By Tuesday, it was in the Bedford Basin.

Jamie Osborne, a fisherman, filmed the beluga from his boat on Monday evening. He stopped the boat about 300 metres from the government wharf in Eastern Passage to take in the unusual sight.

"[I'll] never see something like that again here, I don't imagine. I was surprised to see it. I don't know if it was the cold water or why it's here," he told CBC News Friday.

"When I first seen it, it was right in the sun. I didn't know it was white. So I went over there in the boat just to have a look ... He swam right up to me. For a half hour or so, I sat there."

Fisheries and Oceans Canada officials are warning people who may be out on the harbour to stay away from the whale and report any sightings to the Marine Animal Response Society at 1-866-567-6277.

"It's a potentially dangerous situation for the animal and the public," Wimmer said.

There is concern the whale could get caught up in propellers of small boats, in fishing lines or in ropes anchoring lobster traps near the mouth of the harbour.

As well, officials worry that if people are in a small boat and the whale goes underneath it, the whale could flip the boat.

Wimmer said the whale most likely came from the endangered St. Lawrence population of beluga whales.

"Every now and then they have juveniles who go for a wander," she said. "Occasionally they end up in harbours."