'This is going to save lives': People calling 911 in N.S. can now be directed to nearest AED

Emergency dispatchers in Nova Scotia can now tell callers at the scene of a suspected cardiac arrest where to find the nearest automated external defibrillator if there is one of the life-saving devices nearby.

People calling 911 in N.S. can now be directed to nearest AED

12 months ago
2:30
Emergency dispatchers in Nova Scotia can now tell callers at the scene of a suspected cardiac arrest where to find the nearest automated external defibrillator if there is one of the life-saving devices nearby. 2:30

People who call 911 in Nova Scotia when someone may be suffering a cardiac arrest can now be directed to the nearest automated external defibrillator if there is one of the life-saving devices nearby.

Emergency dispatchers at the Medical Communications Centre in Burnside, N.S., have started using new software that alerts them when there is a registered defibrillator close to a caller's location — allowing them to pass along details so a bystander can run and get one of the portable devices, known as AEDs.

Whether this will happen will depend on how many people are at the scene and the distance to the defibrillator. If one person is with someone who has collapsed, the dispatcher will tell them if there is an AED within 15 metres. They'll also explain how to do CPR.

If there are two or more people at the scene, they'll be told when there is a device up to 91 metres away, according to Emergency Health Services.

The province installed the software in the fall of 2017, but officials have said testing it took longer than anticipated. 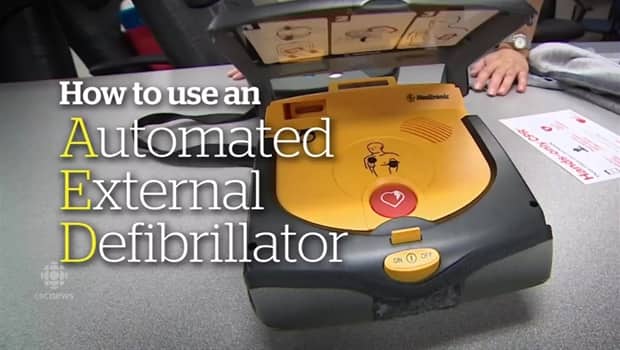 How to use an automated external defibrillator (AED)

Used along with CPR, automated external defibrillators are devices that shock a person's heart when it is quivering erratically during a cardiac arrest and blood has stopped circulating.

The devices must be used as soon as possible after someone's collapse. A person's chance of survival drops 10 per cent for every minute that passes without the help, making it crucial that AEDs can be accessed quickly.

Even with the new software, first responders would still be sent to attend to a collapsed person, but the hope is someone will get care before an ambulance arrives. Each year, there are about 1,500 cardiac-arrest calls in Nova Scotia.

"This is going to save lives," said Dr. Andrew Travers, an emergency room doctor and the provincial medical director of Emergency Health Services.

He said the treatment paramedics and doctors can provide "pales in comparison to bystanders doing quality chest compressions and defibrillating."

"If someone does something in the first few moments of an event happening, before the ambulance arrives, before they arrive at emerg, before they get to the coronary care unit, that is what saves lives," he said.

When defibrillators are successful, a person's heart returns to a normal rhythm and circulation resumes.

"It's always a great call when you get to someone who may have been in cardiac arrest and all of a sudden they're sitting up and talking to people because the bystanders have actually implemented the first three links of the chain of survival [CPR, a defibrillator and early advanced care]," said paramedic Mike Janczyszyn, who also works as the provincial AED co-ordinator.

Defibrillators are often stationed in gyms, rinks and shopping malls. Up until this point, however, emergency dispatchers could only ask a caller if there was a defibrillator nearby and couldn't access information about where registered devices were located.

In order for devices to show up in the provincial system, people must ensure they're registered with Emergency Health Services and list the devices as publicly accessible.

The EHS system will only consider the device available during the hours listed when it is registered. A business may appear as a nearby location during the day, but not at night. EHS recently installed an AED on the Halifax waterfront and Janczyszyn hopes that trend continues.

"We're trying right now to get people to put AEDs more out in the open ... publicly accessible, 24/7," he said.

People who have defibrillators can also register to be a volunteer responder. They receive a notification on their cellphones if there's an emergency within 365 metres so they can bring the device the scene if they're able to.

Over the past 2½ years, the province has put a big push on to register devices, which has increased from 240 to 1,130 registered devices. There is now about one AED per 860 residents.

In 2017, a CBC News investigation found there was little public information about how many there were or where they were located.

Emergency Health Services is still in the process of trying to locate and register other devices that are scattered across the province. Janczyszyn still estimates there could be hundreds of others not registered.

People can see where devices are located in their communities through an online map. Though it's possible to zoom in to see which buildings have AEDS, EHS has cautioned the map is intended to educate people and not be counted on in an emergency.

The province updated the map so it is now mobile friendly.