The Speaker of the Nova Scotia House of Assembly, Kevin Murphy, is satisfied now that former Liberal cabinet minister Andrew Younger has turned over a 12 minute 12 second recording of the conversation Younger had with the premier's chief of staff.

The Speaker of the Nova Scotia House of Assembly says he is satisfied former Liberal cabinet minister Andrew Younger has turned over the full recording of a conversation he had with the premier's chief of staff, Kirby McVicar.

The recording, which lasts 12 minutes 12 seconds, was dropped off Monday morning for Speaker Kevin Murphy to review after he issued a warrant Friday ordering the audio file be retrieved.

"The requirements of the warrant are satisfied, so now it's up to the wishes of the House how it wants to proceed from here," said Murphy. 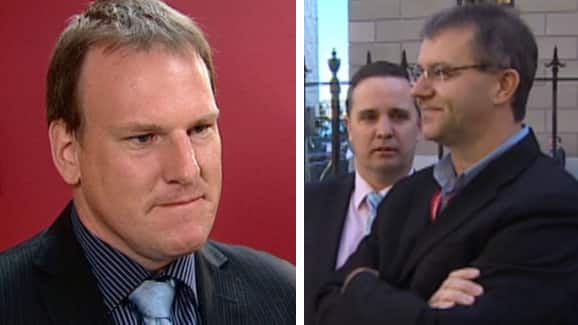 Younger secretly made the recording last February while on a forced leave of absence. At the time, a former Liberal staff with whom he'd been in a personal relationship was under investigation for assaulting him.

In the longer recording, he and McVicar talk about Younger's eventual return to cabinet and that at least three current cabinet ministers may not run again. The implication is they will be shuffled out of their jobs and that will leave room for others — including Younger — to be shuffled in.

"You're better serving us in cabinet," says McVicar.

Two small snippets of the recording have already been released in recent weeks. One was provided to CBC News by Younger himself.

The other was released by the premier's office last week after it was dropped off at the legislature. In that 43-second piece of audio, McVicar makes what appears to be an unsolicited offer to create a job for Younger's wife, Katia Younger.

Last week, Younger, the MLA for Dartmouth East, swore an oath that he didn't have a full recording of his conversation with McVicar.

'Gone through some shit'

"He's been around too f--king long," says McVicar. "He's an ambulance chaser."

McVicar says the government has "gone through some shit" and "we need some time letting the shit go away."

Younger has said he recorded his conversation with McVicar to protect himself as he was suspicious of the premier's office.

The premier's office has said it will make McVicar available to answer questions once the full recording was released. The premier's communications director, Stephen Moore, reiterated that promise Monday morning.

The Liberals have accused Younger himself of dropping off the second, 43-second piece of audio to the legislature last week. Younger has denied it.

With files from the CBC's Jean Laroche