The owner of a craft beer bar in Halifax hopes to send a century-old bottle of beer to a lab so its contents can be analyzed. 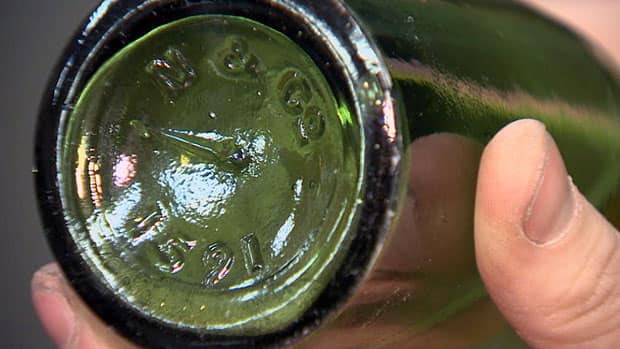 A craft beer aficionado in Halifax hopes to study a century-old bottle of Alexander Keith's beer that a diver discovered in the Northwest Arm.

Chris Reynolds, who co-owns Stillwell Bar in Halifax, thinks the beer bottle — which still has its cork in place — could give some unique insight into the region's brewing history.

"Certainly we have brewing records, recipes and archives we can look to to learn how brewers of the past made beer but the proof is in the pudding. It's more interesting I think to just analyze the actual thing," he said.

"I'm just a big fan of beer. So for me this is like Christmas."

The markings on its bottom of the bottle trace its origins to a company that imported bottles to Canada from England between 1872 and 1890.

After reading about the discovery, Reynolds offered to pay for the bottle's contents to be analyzed in a lab.

"Maybe they knew something we don't? There's all kinds of things that can be learned," he said.

"I think it's of value to beer historians. Definitely to brewers on the science side of things — the chemistry, the hops, all that but also on the artistic side of things. It could potentially inspire brewers to brew a different way."

Reynolds says he's yet to hear back from Jon Crouse, who plucked the bottle from silt in the Northwest Arm.

Crouse told CBC he hopes to preserve the bottle and allow the liquid inside to evaporate.

Reynolds says he's read about old sealed bottles being analyzed in other parts of the world and hopes a laboratory could analyze the suds without interfering with the artifact's integrity.

He also is fairly confident — based on video —  that the liquid sloshing around isn't just run-of-the-mill seawater, but a lab would clear that up quickly.

"It looks like there's potentially some protein in suspension, which is the telltale things with beer," he said.