In Nova Scotia, anyone can call themselves an acupuncturist

Some acupuncture practitioners are calling for greater government oversight for their profession, saying the fact it's not regulated in Nova Scotia is a public safety issue for patients.

Provincial regulation has been long discussed, but has never become a reality

Some acupuncture practitioners are calling for greater government oversight for their profession, saying the fact it's not regulated in Nova Scotia is a public safety issue for patients.

"You could go and stick some needles in me today and call yourself an acupuncturist," said Christa Angell, a registered acupuncturist who practises in Halifax and in the regulated province of Newfoundland and Labrador.

"It's really about the safety of the public. You want to know that the acupuncturist that you're seeing, that's being advertised, meets the highest standards of health care in Canada."

British Columbia, Ontario, Alberta, Quebec, and Newfoundland and Labrador regulate acupuncture provincially through a system such as a college, which sets standards and has disciplinary powers.

In Nova Scotia, many acupuncturists belong to self-governing associations, which have professional and ethical standards for their members. They also issue and revoke billing numbers, which are required by the insurance companies that cover services. 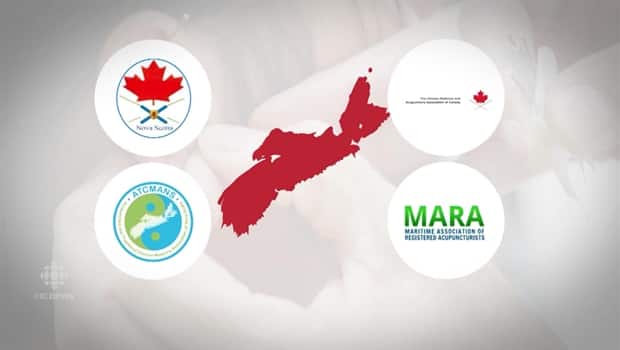 How acupuncture practitioners are currently overseen in N.S.

1 year ago
0:32
British Columbia, Ontario, Alberta, Quebec, and Newfoundland and Labrador regulate acupuncture provincially through a system such as a college. 0:32

However, there's no law governing association standards, and no law that requires someone who practises acupuncture to belong to an association.

Kenton Sefcik, a spokesperson for the Nova Scotia Association of Acupuncturists (NSAA), said patients should find out where practitioners went to school and if they wrote licensing exams.

He said someone who doesn't have sufficient training could put a patient in danger. He said he once saw a chiropractor use an acupuncture needle to pierce the skin through a patient's clothing, which goes against clean needle techniques.

"A patient without any knowledge that there is an unregulated profession operating in the province would be none the wiser," Sefcik said.

The acupuncture community was shocked recently when Halifax police announced three separate charges of sexual assault against a Halifax acupuncturist. The charges against Xiao Han Li have not been tested in court.

At the time when charges were laid, Li was a member of the Nova Scotia chapter of the Chinese Medicine and Acupuncture Association of Canada (NS-CMAAC). The association, which is the largest acupuncture group in the province and has about 70 members, immediately revoked his membership.

Some like Christa Angell think this is the moment to look at regulation again.

"The first thing that I feel is such sadness, but then empowering," she said. "This is the time to talk to the government and talk to the health minister and say, 'Hey, it's time for us to be regulated,'" she said.

There are four acupuncture associations in Nova Scotia:

Each organization has slightly different membership requirements, which may include things like completing a national exam, a criminal record check, malpractice insurance, continuing education, or some other combination of requirements.

CBC News contacted the organizations to get their views on provincial regulation and all said they would be supportive of regulation. However, some said it would likely be a long process.

"It's a conversation that has been had many times," said Lucy Griffiths, the director of professional standards at NS-CMAAC. "There's definitely lots of pros to it. It's not massively a straightforward process, but CMAAC is ready and willing to work with the government if they decide to do that."

Griffiths said regulation has to be "government-driven." In other areas where she has worked, such as the U.K., there have been similar challenges around regulation.

"It seems like the challenge is to bring all walks of acupuncturists together in agreement of the definitions of what regulation should bring," she said.

Shelley Morgan, the president of Acupuncture and Traditional Chinese Medicine Association of Nova Scotia (ATCMANS), said she felt regulation will inevitably come. The group is the second largest acupuncture association in the province and has about 40 members.

Morgan said establishing a college with policies and legal guidelines will be expensive.

"Practitioners might be looking at paying a lot more to practice, but it would also mean that the association wouldn't have to shoulder the dual responsibility that it does now of protecting the public and representing the practitioner," she said.

"I don't think it's something that you can be rushed into; it has to be done right."

Ultimately, regulation would be the responsibility of the Department of Health and Wellness. In a statement, spokesperson Heather Fairbairn said the department is "exploring options that could inform future oversight of the profession."

In the fall legislature session, Health Minister Randy Delorey introduced legislation to regulate who can call themselves a massage therapist, citing the recent case of a massage therapist who has pleaded not guilty to 10 charges of sexual assault.

Before the legislation, massage therapy was similar to acupuncture in that it was an unregulated field with professional associations.

"We understand there is interest from some members of the [acupuncture] industry for more oversight," said Fairbairn. "We recently introduced title protection legislation for massage therapists that requires anyone using the title to meet certain conditions.

"We are looking at practices in other jurisdictions and exploring options that could inform more oversight for other health-related professions in the future. This work is ongoing."