A Halifax clothing line that started out as a classroom project is this summer's viral fashion trend. 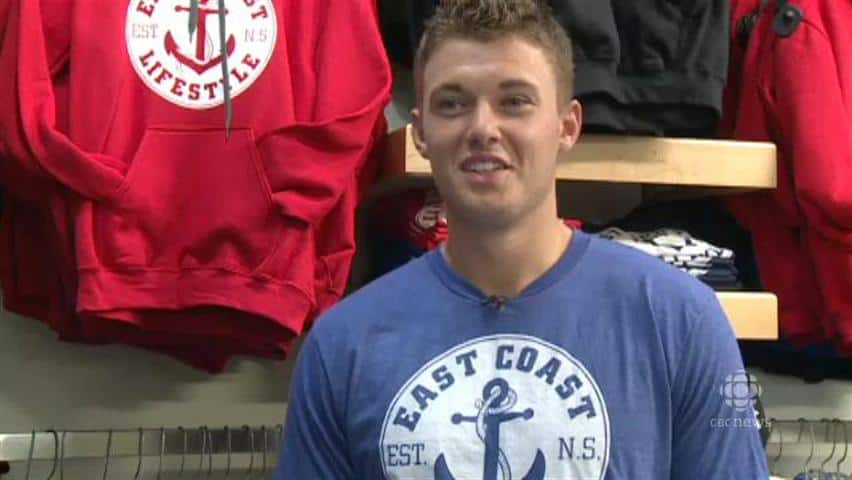 7 years ago
1:44
One of the hottest fashion trends right now has home-grown Nova Scotia t-shirts flying off the shelves. 1:44

A Halifax clothing line that started out as a classroom project is this summer’s viral fashion trend.

Alex MacLean, a 21-year-old from Halifax, is a fiercely proud Nova Scotian.

MacLean’s business, East Coast Lifestyle, started out as a project for one of his classes at Acadia University. He hoped to sell 30 sweatshirts.

"Those 30 hoodies flew in the first day. After that I just thought about  new designs, this anchor design … After the anchor came out I've been incorporating new designs for the seasons," he said.

By July, MacLean found himself spending four hours per day at the post office, filling out orders.

Six months after the project began, 30 sweaters have turned into 15,000. The products are flying off store shelves in Halifax. The cheapest tank top costs $30.

Even celebrities are eager to get their hands on it.

Other famous Haligonians such as Boston Bruins forward Brad Marchand and rapper Classified have also been spotted with the trendy shirts.

Tammy Green, manager at the clothing store Pseudio, said people have been lining up to get their hands on an East Coast Lifestyle shirt.

"It's about the brand, we want to be repping where we're from."

The items are so popular, her store goes through two shipments a day.

But the modest MacLean said it’s great to be successful but it’s also about giving back to the community.

"We've done several donations to the local homeless shelters, kind of thing, and whenever I see someone on the side of Spring Garden Road in need, I'll gladly give them a t-shirt or something to help them with their day and make them proud as well," he said.

When MacLean graduates with a marketing degree next year, his plan is to sell the shirts full time.
CBC's Journalistic Standards and Practices|About CBC News
now