An 82-year-old man in south end Halifax is flying a white flag of surrender on his lawn as he fights with Halifax Water about his storm runoff.

Fred Lordly refuses to seperate his storm and sewage pipes 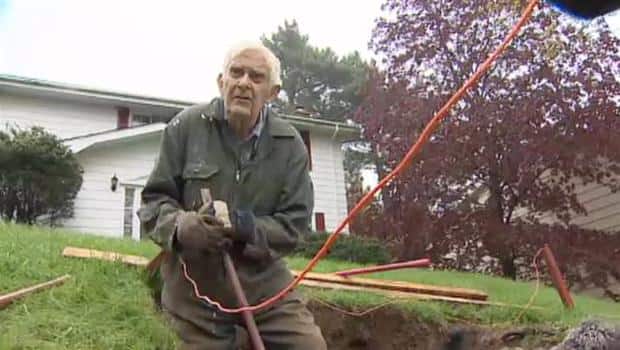 8 years agoVideo
2:32
Fred Lordly says he shouldn't have to pay for a pipe problem on his property because the city approved the plan in 1968. 2:32

An 82-year-old man in south end Halifax is flying a white flag of surrender on his lawn as he fights with Halifax Water about his storm runoff.

Fred Lordly said the flag is his way of telling Halifax Water he gives up. But the embattled man isn’t doing it quietly.

He said when built his house on Emscote Drive in 1968, the city approved his storm and sewage pipes. Then, in 2011, he was told he had to separate his sewage from his storm drain.

The city said the pipes are intersecting and some sewage is leaking into the Northwest Arm.

He refuses to pay, saying if the city has an issue with his storm runoff they can pay to fix the problem.

Lordly is now digging with a shovel to find the connection from his house to the wastewater connection at the street.

Lordly could be facing fines or he could have his water cut off if doesn't stop the flow of sewage from his home into the Northwest Arm. But he has a plan to deal with that, as well.

"I'm going to be a foot ahead of them. I'm closing my house up for a month or two. I'll live in my car with my dog who doesn't talk back."

Halifax Water issued orders to seven homeowners in the neighbourhood to correct the same problem. So far, they've all complied. Lordly is the lone holdout.