Police have arrested 14 people and laid 43 charges related to smuggling drugs into the Central Nova Scotia Correctional Facility in Burnside. 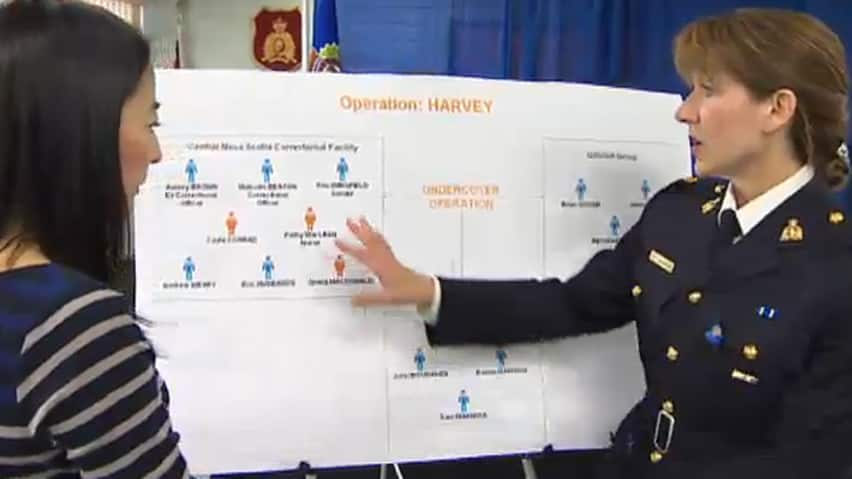 Police have arrested 14 people and laid 43 charges related to smuggling drugs into the Central Nova Scotia Correctional Facility in Burnside.

Police allege three of them are members of a "significant crime group."

The ring also allegedly involves two former jail guards, a former nurse at the jail, an inmate and a Atlantic Superstore employee among others.

"He's the person who would redistribute on the inside. He would receive drugs and then redistribute them from within," she said.

The bust was part of Operation Harvey, a five-month undercover investigation into drug trafficking.

To view raw video of Insp. Joanne Crampton describing the chain of individuals allegedly involved in the ring, click here.

The investigation was triggered by the Oct. 26 arrest of Malcolm Beaton, who was a guard at the time.

MacLean left the Burnside jail to work at Direction 180, a methadone clinic, as a nurse and as a counsellor in January. The executive director of the clinic told CBC News none of the allegations against MacLean have anything to do with Direction 180.

Brittaney Applebaum, a client at the methadone clinic, knows MacLean.

"It's unbelievable, very shocking and it's sad because she's an incredible person. She's one of my favourite people here," said Applebaum.

Applebaum is also a former inmate. She said these arrests won't stop the jailhouse drug trade.

"They knock one off, another two will pop up," she said. "There's always somebody."

Police allege four people were helping from the outside.

Cayla Conrod, 22, a Superstore employee is currently under house arrest and on a $10,000 surety.

She and her co-accused have a date before a judge in two weeks.

During the sting, police seized over a kilogram of cocaine, a loaded handgun and a quantity of cash.

The jail does criminal record checks, but said it will tighten up its hiring practices by checking to see whether applicants have any ties to criminal associations.