2 schools to close in Strait region

Members of the Strait Regional School Board in eastern Nova Scotia have voted to permanently close two more schools in their district. 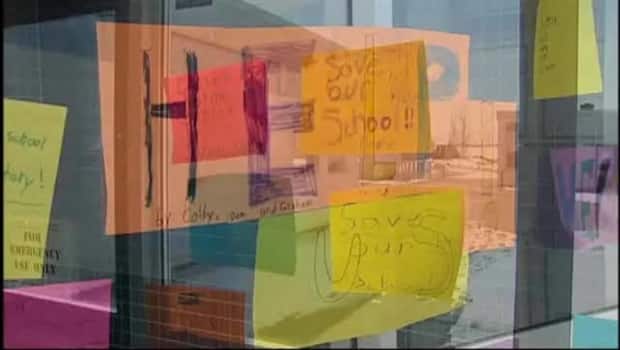 9 years agoVideo
2:22
Parents of children who attend a school slated to close in Heatherton say the fight is not over. 2:22

Members of the Strait Regional School Board in eastern Nova Scotia have voted to permanently close two more schools in their district.

West Richmond Education Centre in Evanston and Rev. H.J. MacDonald in Heatherton will both close, the board announced on its website this week.

The decision follows a vote last week to close Canso Academy and transfer its students to the Fanning Education Centre.

Raylene MacGhee, who has two children attending West Richmond Education Centre, told CBC News the parents there are planning to fight the closure.

"Community schools are really the foundation of a community and we feel that we've lost that foundation," she said Wednesday.

"Quite frankly, we're angry that the students' needs are not a priority with this school board."

Theresa MacDonald has been doing lunch time supervision at Rev. H.J. MacDonald for more than 30 years, and in that time she's said she's seen the numbers dwindle.

"There are no young people here, they are all gone out west," MacDonald said. "There's nothing to do, no work here."

Jack Beaton, the superintendent for the Strait Regional School Board, said the board has been grappling with reduced provincial funding and declining enrolment.

"Declining enrolment in the Strait Regional School Board has touched all counties and they've gone from — in a 10-year span — a reduction of about 30 per cent across the board," he told CBC News.

Heatherton residents fear that losing the community school may mean the end of rural ways of life.

The Strait Regional School Board voted to defer a decision about where to place students who are currently attending West Richmond Education Centre until April 4.

The school advisory council at Rev. H.J. MacDonald has been asked to present a recommendation at the same meeting about where their students should go.

According to the schools' websites, the three closures will affect a combined 303 students: 75 students at Rev. H.J. MacDonald, 80 at Canso Academy and 148 at the West Richmond Education Centre.