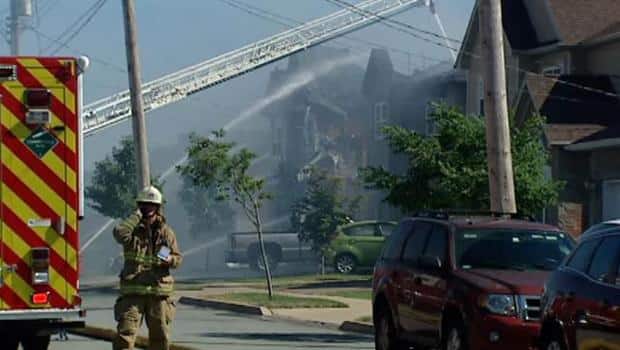 The fires, on Lindenwood Terrace, were reported just after 3 p.m.

"On arrival, what they [firefighters] encountered was on [house] number 152 Lindenwood, very heavy fire on the upper levels and fires coming out from all the eaves on all sides of the building," said Dave Meldrum, divisional chief for Halifax Regional Fire.

"This fire was also extending to a home next door, which I understand to be [house] number 146."

The roofs of homes on either side of the two burning houses were hosed down, according to the CBC's Mark Crosby.

"Because of the amount of fire and the amount of damage, we call this a defensive strategy, so we fight the fire from outside," Meldrum said.

Traffic in the area was redirected for a number of hours.

Power was originally shut off to 1,600 Nova Scotia Power customers, and natural gas had been shut off in the area, Dave Meldrum, spokesman for Halifax Regional Fire confirmed.

At the height of the fires, 35 firefighters were on scene.

Bystanders on the street told firefighters no one was inside, and the cause of the fire isn't yet known.