Sandy Silver's Liberal Party has vaulted from third-party status in the Yukon legislature to oust the conservative Yukon Party after 14 years. The Liberals had one seat in the legislative assembly before the election, now they have 11.

Yukon's Liberal Party has won a majority government, vaulting from third-party status in the legislature to oust the conservative Yukon Party after 14 years.

The party won 11 of the legislative assembly's 19 seats in Monday's election.

The Liberal win came at the expense of both the Yukon Party, which will now move from the government benches to become the official opposition, and the NDP, which now becomes the Third Party. The Yukon Party won six seats on Monday (down from 11), and the NDP just two (down from six).

"We are ready to hit the ground running," Silver said in his victory speech Monday night at his campaign headquarters in Dawson City.

"Yukoners have been heard and the Yukon Liberals are ready to lead the positive political change in our territory." 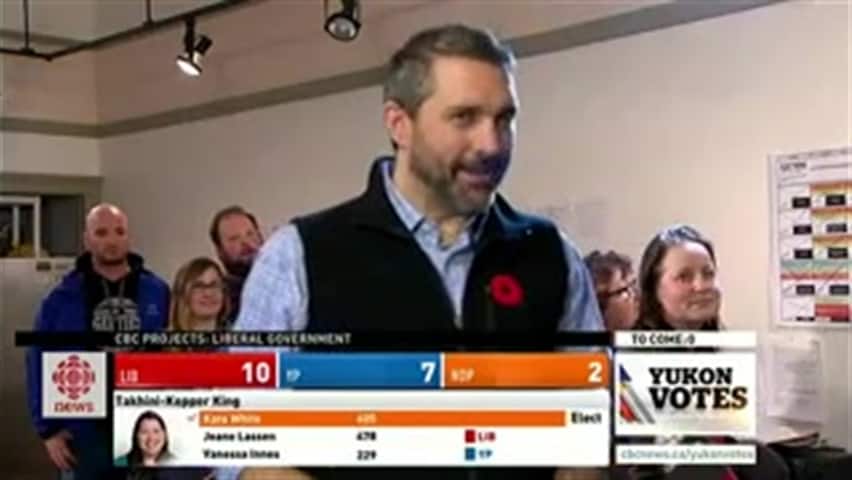 Yukon's next premier Sandy Silver on his election win

Silver's win ends 14 years of rule by the conservative Yukon Party, and offers the Liberal Party another shot at government in the territory. The party only held power for one brief and tumultuous term, from 2000 to 2002, led then by Pat Duncan.

Monday's victory also represents a major turnaround for a party that had just one seat (Silver's) in the territory's legislative assembly at dissolution.

The former math teacher, who grew up in Antigonish, N.S., credits his party's campaign, which he says was based on "positivity, inclusivity and respect."

"When Yukoners saw a Liberal candidate at their door, they met someone who they could trust and someone who will now ensure that their voice is heard and that their issues and concerns are acted upon."

Silver reiterated that promise in his victory speech, saying the Liberals will meet with First Nations leaders within 30 days of forming government, to "re-set the relationship," and honour negotiated treaties.

"These self-governing agreements, they are the pathway to Yukon's economic future. If we sit down together, we can grow the economy, we can protect the environment, we can create good jobs that benefit all Yukoners," he said.

Yukon Party leader Darrell Pasloski suffered along with his party, losing his Mountainview seat to Liberal Jeanie Dendys. In his concession speech Monday night in Whitehorse, Pasloski announced he will resign as party leader.

"Yukoners have spoken. This is certainly not the outcome that we wanted but we all know that the voters are never wrong," Pasloski said.

"Clearly tonight didn't go the way we wanted it to go. We'd much rather be celebrating a victory tonight but that doesn't mean we can't be proud of what we've accomplished, both in the last five years and in the last 31 days."

Pasloski also paid tribute to his family, calling his wife Tammie "his biggest supporter, and the most remarkable woman that I've ever met." 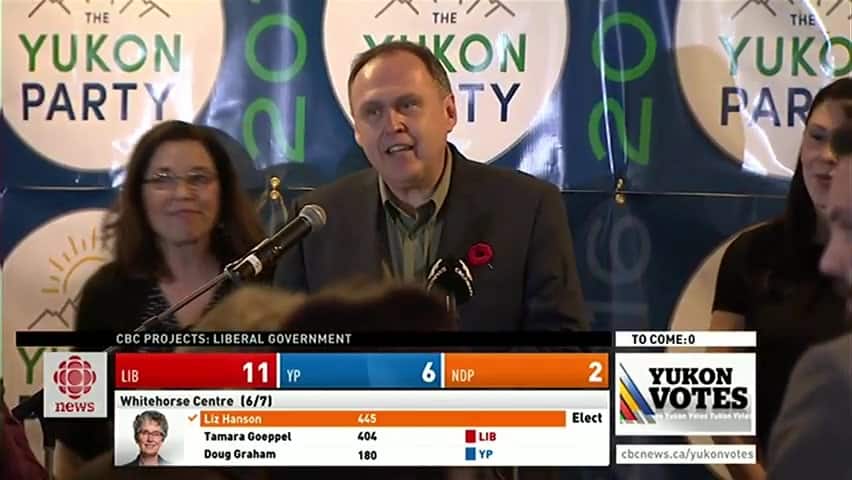 The Yukon Party also lost two long-standing MLAs, including one of the longest-sitting members of the legislature, cabinet minister Elaine Taylor (who was first elected in 2002). She was unseated by Liberal Richard Mostyn in Whitehorse West by just 22 votes, 455 to 433.

Darius Elias was also unseated in Vuntut Gwitchin by a Liberal, Pauline Frost, though with a difference of just seven votes (77 to 70), there will be an automatic recount. Elias was first elected in 2006 as a Liberal and re-elected in 2011, but later joined the Yukon Party caucus.

The NDP also suffered big disappointments, seeing four incumbent MLAs defeated and losing status as the official opposition. Leader Liz Hanson held onto her Whitehorse Centre riding, and Kate White was re-elected in Takhini-Kopper King, but no other New Democrats were elected. 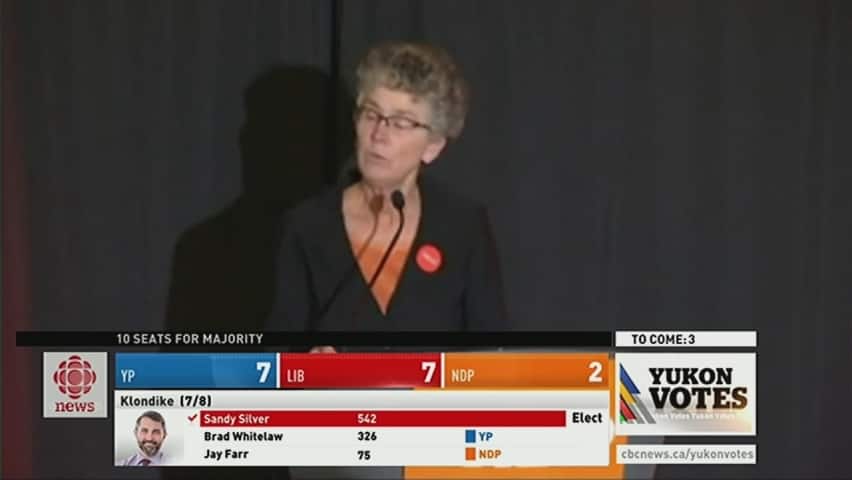 Hanson believes her party suffered from an anti-Yukon Party vote that coalesced around the Liberal Party, at the expense of the NDP.

"What we heard time and time on the doorstep, the Liberal had been there and said 'you know, you really have to vote strategically.' And what we learned, the word strategic became code [for], 'you have to vote Liberal,'" Hanson said.

"This notion of strategic voting I think has to be put away once and for all. We need to begin to think about, 'what are you voting for?'"

Meanwhile, Yukon's Green Party again failed to win over many voters. The party won just 145 votes across the territory, representing about 0.8 per cent of all votes. That's up slightly from 2011, when the party's two candidates won just 0.7 per cent of the votes.