Yukon College has taken a first step towards eventually creating a northern university by announcing its first degree program - a three-year bachelor of policy studies in indigenous governance. 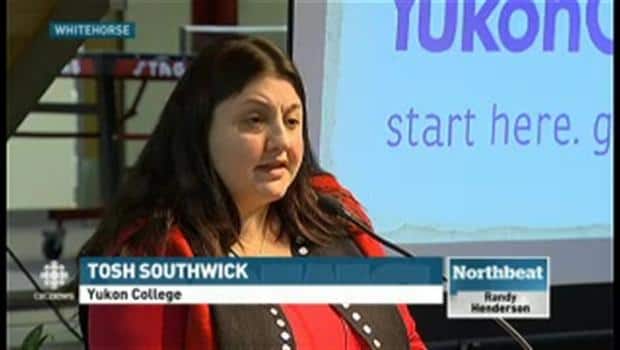 Yukon College has taken a first step towards eventually creating a northern university by announcing its first degree program, that will start in 2017.

The three-year bachelor of policy studies in indigenous governance will build on existing courses, says Tosh Southwick, director of First Nations Initiatives at the college.

"A priority of this program is to foster executive leadership with respect to administrative, political and corporate management, and from an indigenous perspective," said Southwick.

"Students will analyze the evolution of indigenous self-determination and self-government in Canada and internationally and they'll do it from their own community where the story's unfolding."

Paul Flaherty, chair of the Yukon College Board of Governors, says the college is focusing on subject areas that are unique to Yukon.

Flaherty says leading with its strengths may help the college eventually become a university, but there are requirements that have to be met.

"There's some key building blocks we have to put in place," he says. "The biggest one is the quality assurance program. We can't become a university until we have that in place."

The provinces run their own quality assurance programs. Yukon would have to decide whether to start one or ask to join of the provincial plans.

In addition to the bachelor's degree in indigenous governance, Yukon College will also offer one-year post-graduate certificate in climate change and public policy.

College president Karen Barnes says the courses offered by the college's Northern Climate Exchange cannot keep up with demand and northern educators around the world ask the college for information about the courses.

"The governments of Norway and Sweden have asked us if we could deliver those courses in Norway and Sweden," she said. "There's such a need across the North for an understanding of what climate change is going to mean for policy."

The Yukon government says it will work with the college to provide funding for the new programs.