N.W.T. fiddler gets a new bow — thanks to some admiring paramedics

When three paramedics were called to Wally Firth's B.C. seniors residence, they found a man eager to share stories and fiddle tunes. What Firth didn't have was a quality bow.

'The paramedics went over and above the normal duties to do a deed for this old boy,' says Wally Firth

Wally Firth — former trapper, CBC broadcaster, the first Indigenous MP from the N.W.T., and lifelong musician — knows how to spin a good yarn or two.

"You know, I'm a storyteller and I've been on this earth for 85 years. I did a lot of things in my life. So I have a lot of stories to tell," he said.

The fiddler from Fort McPherson, N.W.T. has got a new one to tell now — about how he took a fall and ended up with the real horsehair fiddle bow he'd long wanted, thanks to some admiring paramedics.

"What I think is the most joyful part of that is the paramedics went over and above the normal duties to do a deed for this old boy," Firth said, over the phone from where he now lives, at the Glenshiel seniors residence in Victoria.

It started when B.C. paramedics were called to Firth's room at Glenshiel one day earlier this fall. He'd had a fall and it wasn't immediately clear whether the 85-year-old was seriously hurt.

One of those three paramedics, Daron McDonald, said they quickly determined that Firth wasn't hurt, but he did need help getting up. When Firth was upright in his chair again, they all got to talking.

I knew I had to ask him to play for us.- Paramedic Daron McDonald

"His room didn't have a whole lot of stuff in it, which is kind of unusual for a lot of these elders," McDonald said.

"So we started to ask him about that and he started telling us about his amazing life and, you know, kind of just the extraordinary experiences he had, and what led him to where he was that day."

Firth told them he had fallen while reaching for his fiddle bow.

"Right away, I knew that I had to ask him to play for us. So I immediately said to him, I said, 'if you're not hurt Wally, I'd love to hear you play,'" McDonald recalled.

The fiddler was happy to oblige.

"I picked up my fiddle and I played a number," Firth said.

Then he played a few more, and shared some more stories, and his small audience was rapt. But artists can be their own worst critics, and Firth was sheepish.

"Basically after every song ... he kept apologizing and apologizing that his bow was not of any decent quality and that he was, you know, he felt so bad that he couldn't play to the best of his ability for us," McDonald said.

The paramedics had no complaints about Firth's musicianship — and when they eventually left, they had lots to talk about.

"Something resonated between all three of us. So we just felt like we needed to do something for him, just after hearing his story," McDonald said.

McDonald took to social media, where he put out a call for anyone who might have a real horsehair bow for Firth. He shared few details about Firth, though, keeping it vague to maintain the man's privacy.

Soon enough, McDonald got a response. It was from a man who worked for music retailer Long & McQuade.

"The gentleman messaged me and said, 'this bow, it's got to be for Wally Firth, isn't it?'" McDonald said.

Turns out Firth had a long relationship with the retailer. McDonald found out that Firth had donated several musical instruments over the years to be sent to the North for music programs and to other people in need.

McDonald and the other paramedics then made arrangements to deliver it to Firth in person. They had to take extra precautions because of the pandemic, but eventually they were back in Firth's room, masks on and ears open as Firth took his new bow for a spin. And then another spin. And another.

"He was amazing and played for us for as long as we could stay ... and we really didn't want to leave," McDonald said. 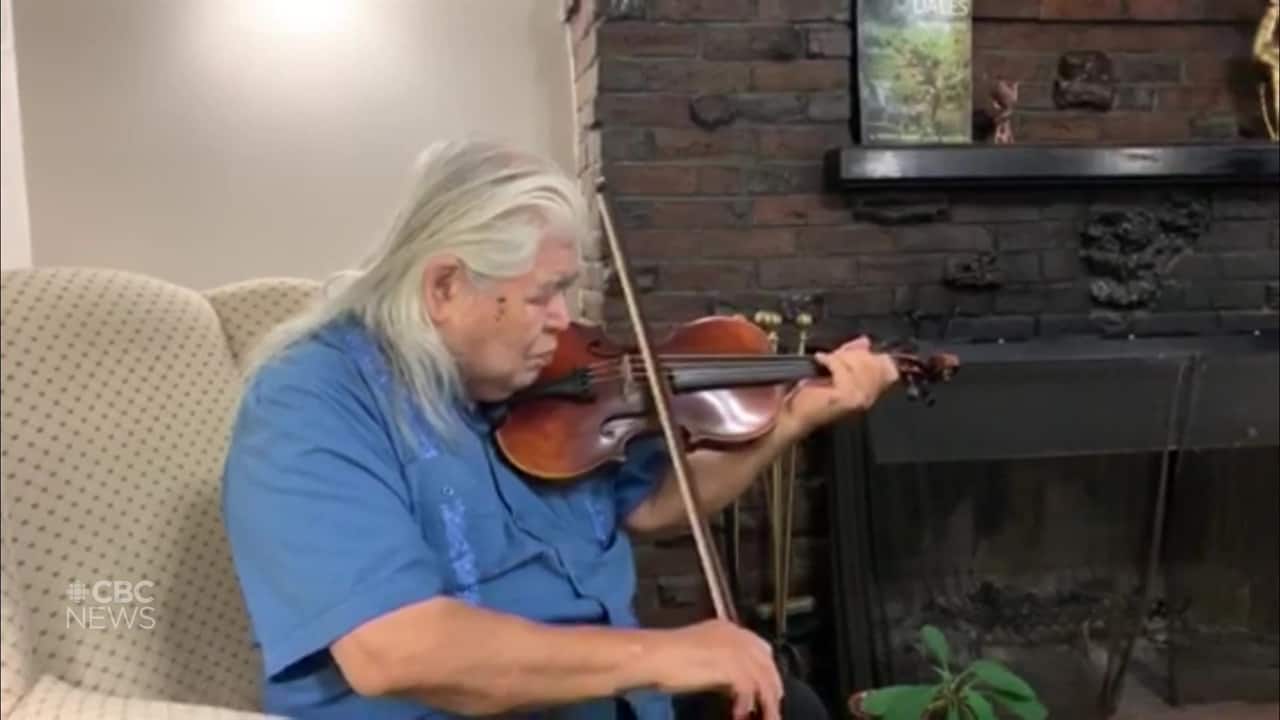 Firth was delighted with his prized new bow.

"I was very grateful for those guys for what they did, well over and above their normal duties. That was pretty good. Very good. Yeah," Firth said.

The paramedics were just as delighted — and grateful.

"It just kind of was one of those moments where we were able to stop and just talk and really connect with a man who turned out to be so much more extraordinary than we ever could have thought," McDonald said.

"It was just a reminder to just stop and get to know people when you can."

Written by Paul Tukker, with files from Leonard Linklater