Michael H. Davies did a lot of careful planning surrounding the "science" of the tossing of hot tea in –40 C weather in Pangnirtung, Nunavut, and came up with internet gold.

'As everybody knows, in Nunavut we go to great lengths to have tea somewhere strange,' Michael Davies says

A spectacular photo taken in Pangnirtung, Nunavut, is generating a lot of attention on social media.

The photo shows local resident Markus Siivola throwing hot tea into the air as he bends backwards. In the –40 C weather, the tea freezes as soon as it's tossed.

Photographer Michael H. Davies said the whole photo shoot was planned after he saw a similar photo elsewhere and decided he could top it. 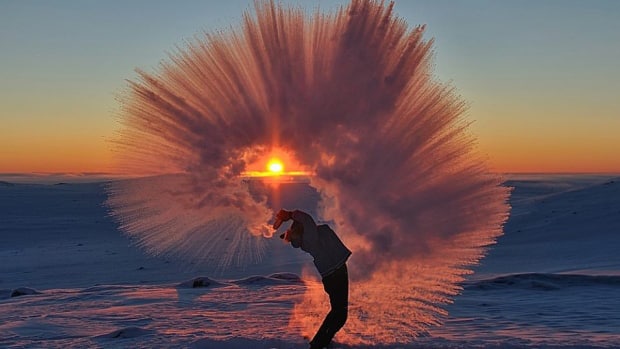 5 years agoVideo
5:59
Michael Davies didn't think much of his picture that turned to gold on the internet until the numbers convinced him otherwise 5:59

"I went through the science of it," he said. "I figured, 'OK, I need 40 below, I need calm winds, I need the sunset in the background so it lights up my fog when I film it.'"

Davies and Siivola travelled by snowmobile into the mountains about 45 minutes out of town.

It was a race against time to catch the setting sun. The community, which is only a few kilometres below the Arctic Circle, gets about 2½ hours of sun this time of year.

They were carrying five or six thermoses of hot water, each with different amounts so they could experiment to get the right shot.

"In each one we threw in a tea bag because we thought, if this doesn't work, at least we can have a tea, because, as everybody knows, in Nunavut we go to great lengths to have tea somewhere strange, whether it's in front of an iceberg, or on top of a mountain or in the middle of the tundra."

The second shot proved to be internet gold, though Davies admits it wasn't his first pick.

From Pontypool to Pangnirtung

Davies, originally from Pontypool, Ont., is a trained painter, photographer and glass blower. He has lived in Pangnirtung for about 10 years with his wife and, now, two young children.

"We just kind of randomly decided, 'Let's go somewhere that nobody goes but everybody talks about.'"

For Davies, Pangnirtung is now home, but he admits the family doesn't usually stay for Christmas.

This year, however, he says it would have cost $8,000 to take his family to Ontario, so they decided against it. Instead, they stayed put, and he took the photograph the next day.

"Obviously if we had gone south, it wouldn't have happened."

Since posting the photo on Facebook, he has had inquiries from around the world.