Scientists have found that ice cliffs on Greenland's Helheim Glacier are slumping — a sensation that typically happens on land. This may trigger rapid sea-level rise, the study says.

Scientists have found that tall ice cliffs in Greenland are slumping — and this may eventually lead to a more rapid rise in sea levels.

The study, published this month in the journal Geology, suggests ice on glacial cliffs in Greenland and Antarctica are acting like soil and rock by slumping — which refers to when weakened sediment breaks apart from land and slides down a slope.

"It's sort of like a human slumping down in an easy [recliner] chair," said Richard Alley, one of the authors of the paper and a professor of geosciences at Pennsylvania State University.

Alley's team studied the Helheim, one of Greenland's largest glaciers, and found slumping on ice cliffs as tall as 100 metres above sea level, and 900 metres below.

"What we see in Greenland is the stuff above the water slumps down as if in the easy chair. But it was holding down this giant iceberg below the water that is almost 10 times as high.

"And then that breaks up."

When the ice slumps, it rotates, then the ice below the sea will pop up, Alley said. In turn, that creates a crack in the ice, which weakens it and leads to calving — a huge chunk of ice breaking off.

"It does so fairly dramatically," said Alley. "There are 50-storey splashes." 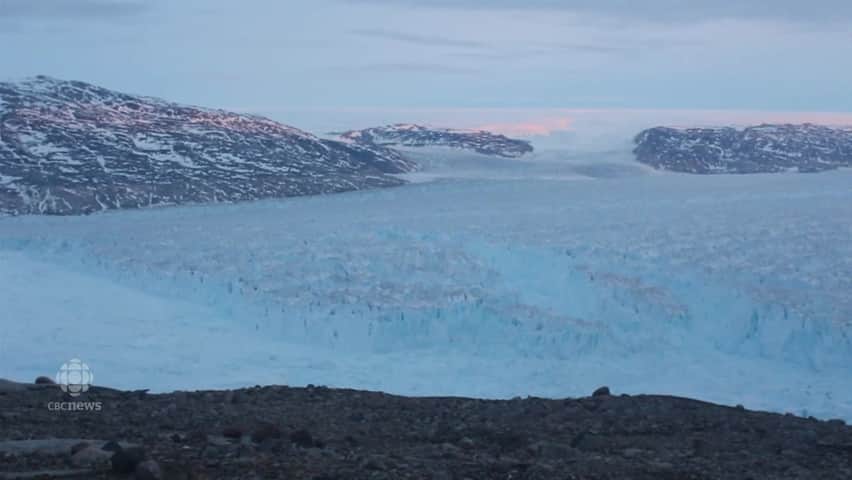 Alley said these big calving events happen very quickly and can cause earthquakes with a magnitude of up to 5.0 "that you could hear in Yellowknife or ...  down in the States."

Why is slumping ice worrisome?

Alley said as the climate gets warmer, the ice cliffs could get taller.

As glaciers retreat farther inland due to melting, there may be thicker ice — sometimes upward of 3,500 metres thick in parts of Antarctica — which would create massive ice cliffs, said Alley.

"What we're worried about is that if things go wrong in Antarctica, that eventually it will make cliffs that are so high that they can break without much weight."

He explained that normal calving happens after the ice melts and weakens due to warming. On the other hand, taller ice cliffs can slump and break off more rapidly.

"If we continue to make it hot … then sea level rise might be very rapid," said Alley, adding that it could rise three metres in a matter of decades once the super tall ice cliffs started slumping.

That could impact coastal cities, people living on islands, and even some airports that aren't much higher than sea level, said Alley.

Alley said the team plans on studying what the anatomy of the ice is like on these glaciers that slump, and work on measuring just how much warming is needed to create the massive cliffs — "at which point there'd be real trouble."

Priscilla Hwang is a reporter with CBC News based in Ottawa. She's worked with the investigative unit, CBC Toronto, and CBC North in Yellowknife, Whitehorse and Iqaluit. Before joining the CBC in 2016, she travelled across the Middle East and North Africa to share people's stories. She has a Master of Journalism from Carleton University and speaks Korean, Tunisian Arabic, and dabbles at classical Arabic and French. Want to contact her? Email priscilla.hwang@cbc.ca or @prisksh on Twitter.