Homeowners in Ross River, Yukon, want to know why nothing was done to avert a second flooding this season in the community Thursday. 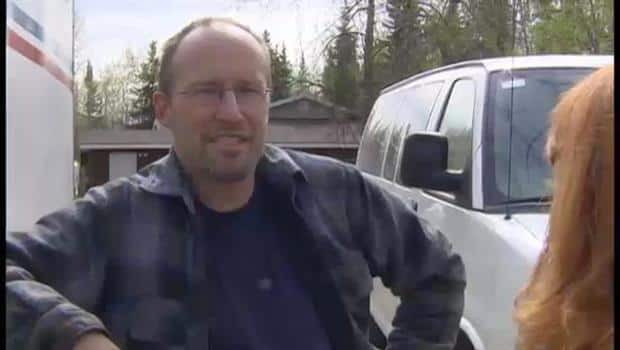 Homeowners in Ross River, Yukon, want to know why nothing was done to avert a second flooding this season in the community Thursday.

Homes near the Pelly River were flooded two weeks ago when an ice jam upriver suddenly gave way.

Tim and Gwendy Colwell said they had about 15 minutes to get their five children, pets and a few possessions out of the way.

"We had called our kids and said we’re going to be down here in 10 minutes, meet us at the road," said Tim Colwell. "And when we got here, the road looked like a river."

On Wednesday, the rising waters again threatened to spill over the dyke.

Colwell said he alerted the RCMP and moved what he could.

Crews inspected the site that evening, and told CBC News the water could crest at any time, including overnight but they did not sandbag the spot to prevent a breach.

On Thursday morning around 10 a.m. the water breached the dike, and poured over it for several hours before sandbags finally arrived. By then, the damage had been done, and the homes were flooded again.

"I do feel, as a community, we could have stepped up and put some sandbags up. I don’t know where the sandbags were, but hopefully they’re coming today," Colwell said on Friday.

A spokesperson for the Yukon government said the crews were taken by surprise.

"When the situation was where there was a breaching, that's when we responded and we continue to remain on the ground," said George Maratos, spokesperson for Yukon Wildland Fire Management.