A woman who took a video of a raven plucking a parking ticket off the windshield of a car in downtown Yellowknife says she saw "the little monster" shred it. It’s unclear if the raven was disputing the ticket or just hungry.

'I watched the little monster take the ticket from under the windshield wiper and shred it,' says videographer 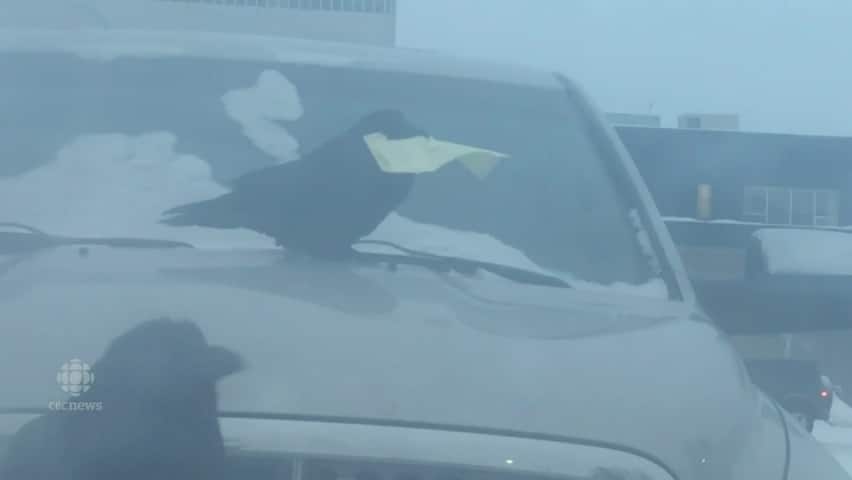 4 years ago
0:08
That's one way to get out of paying a ticket! Annemieke Mulders caught this raven snatching up a parking ticket in Yellowknife, Northwest Territories. 0:08

A raven was caught on video plucking a parking ticket off the windshield of a car in downtown Yellowknife on Thursday, and the videographer says she saw the bird "shred it."

It's unclear if the raven was disputing the ticket or just hungry.

"I watched the little monster take the ticket from under the windshield wiper and shred it, and (I think) eat some of it," Mulders told CBC News in an email.

The City of Yellowknife said the ticket, despite being shredded, still needs to be paid.

"In most cases, once we place the ticket on the vehicle for the violation, it is their responsibility."

The owner of the vehicle has 10 days to pay the $25 ticket — that's the discounted early-bird pricing. After that, the ticket soars to $50.

It's unclear if the owner is aware of the infraction.

Marchiori said if the early deadline is missed, the owner could take the issue to traffic court.

Ravens in Yellowknife have been blamed for more than missing parking tickets.

They're commonly cited as the cause of power outages and, in 2014, the Northwest Territories Power Corporation said a raven caused not only a power outage but also a forest fire after landing on a power line near Yellowknife.

"We believe that a raven touched one of our wires, one of our transmitting towers, and the result was he was electrocuted and fell to the ground and started the fire and it cut the power," Pam Coulter of the NTPC said in 2014.

In an email to CBC News, Coulter said ravens caused two disruptions to power in Yellowknife in 2016. She noted that the number of incidents are down significantly since the installation of bird deterrents — metal spikes — on its transmission towers was completed in 2015.