Smarter than the average 4-year-old? Raven intelligence at heart of new study

In a series of tests, ravens showed signs of a general planning ability that previously had been documented only in people and great apes. Even monkeys have failed to show it.

The results, to Mathias Osvath, one of the researchers, suggest that ravens possess some form of episodic memory — a key trait in human intelligence.

"It's like that movie that you see in front of your inner eye when you think about what you had for lunch yesterday or what you will do on your vacation," he said. "We don't know if ravens have this but they have something functionally similar at least."

It's not like you could ask a raven to arrange your wedding: Ravens showed they could plan by setting aside a tool that they suspected would get them a tasty treat later. And they prepared for future bartering, too.

Still, it's impressive. Ravens, along with crows, jays and others, belong to a bird group called corvids. Some corvids have shown that in hoarding food, they do some planning for the future instead of just acting on natural urges. But does such foresight appear only for that behavior, as has been proposed? Or can corvids, like people and great apes, apply it to other activities?

This more general planning ability results from the combination of several skills, and if it appears in both corvids and great apes, it must have evolved more than once, the Swedish researchers said.

So the researchers, Osvath and Can Kabadayi of Lund University, tested five captive ravens in two tasks they don't do in the wild: using tools and bartering with humans. They reported the results in a paper released Thursday by the journal Science.

The birds were shown a box that had a tube sticking out of the top, plus three stones. They learned that they could use a stone as a tool. If they dropped it down the tube, the box would release a coveted doggie treat. They also learned that some other familiar objects, like a small wooden wheel and a ball, would not work.

In one experiment, the ravens were shown the box, but without any stones available. Then the box was taken away. An hour later, in another location, they were presented with a tray containing a stone plus three objects the birds knew would be useless for releasing the treat.

They were allowed to choose one thing from the tray. Fifteen minutes later, the box would show up again. Sure enough, in 14 cases of encountering the tray and later seeing the box reappear, they usually chose the stone and proceeded to use it correctly.

The same thing happened in another experiment, when the box didn't show up again until the next day, a delay of 17 hours. 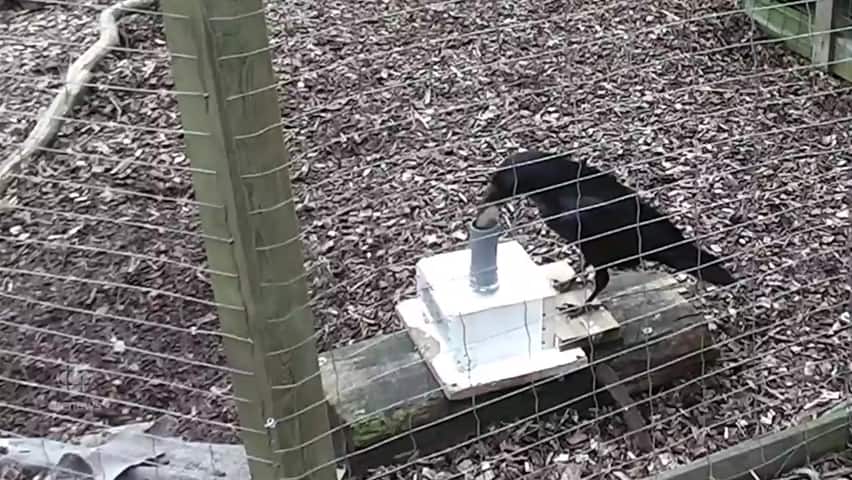 Ravens can plan ahead

4 years ago
0:13
A raven uses a tool to get a reward as part of a study that shows ravens have memories and the ability to plan ahead, quashing previous claims that those powers were limited to humans and their great ape ancestors. 0:13

Further work showed the ravens would pass up an immediate reward if they could get a better one by waiting a while.

"I don't think many four-year-olds would solve that," Osvath said.

The ravens also showed they could barter for what they needed. The birds learned that they could exchange a blue plastic bottle cap with one of the experimenters for the favoured doggie treat. When the experiments were repeated with the bottle cap replacing the stone, and an experimenter instead of the box, the results were basically the same.

"To be able to solve these tasks, you don't need one particular skill, but you need a host of skills and you need to be able to combine them in some way," Osvath said.

"These birds seem to combine these skills in a very similar way to apes, so probably there are many animals out there that have parts of these skills, but they can't combine them."

The work presents "compelling evidence" of planning ability that goes beyond stashing food away, Markus Boeckle and Nicola Clayton of Cambridge University wrote in an accompanying commentary.

The raven as trickster

Although the evidence is new, the ability of ravens to see ahead has long been suspected: In Greek mythology, they are associated with the god of prophecy, an old term for a group of ravens is "conspiracy" and in Game of Thrones a three-eyed raven appears in a prince's prophetic visions.

Denesuline elder Jonas Sangris grew up with stories of ravens as the trickster.

"He does all kinds of crazy things," Sangris said, before sharing a tale of vengeance that only a creature with a good memory and the ability to plan ahead could pull off.

"One time the people tried to kick him out of the community. So he took off. On the river, he made himself a big raft, put all kinds of stuff, hung stuff up. When [community members] saw it they thought he was a Hudson Bay man coming down river."

Sangris said the community spent hours preparing a big welcome ceremony and feast for the arrival of the visitor they thought was bringing goods to trade.

"But he was just a raven," Sangris said, laughing. "He didn't have anything, he was just pretending."

With files from Hilary Bird