Permafrost that's thawing deep under some Arctic lakes could more than double climate warming due to permafrost thaw this century, according to a new study.

Permafrost that's thawing deep under some Arctic lakes is speeding up climate warming.

That's according to a recent study led by the University of Alaska Fairbanks, published earlier this month in Nature Communications.

Researchers looked at the "abrupt thaw" of permafrost beneath more than 300 thermokarst lakes in Alaska and Siberia over the last decade, along with high resolution images of lake changes in interior Alaska.

"We're expecting ... the response of these thermokarst lakes to be a flash-thaw of permafrost in the next 80 years," said the study's lead author, Katey Walter Anthony, an associate professor with the university's Water and Environment Research Center.

"In fact, our modelling of the thermokarst lake formation this century suggests that the peak of the formation is really only decades away — it's closer to about 2050 or 2060."

What is a thermokarst lake?

Thermokarst lakes form in ice-rich areas when warming soil melts ground ice, causing the land surface to collapse and water to fill the sunken area, Anthony explained. This water in turn accelerates the thaw of permafrost deep beneath the expanding lake.

Carbon that was stored in the permafrost — which is between 10,000 to 40,000 years old — then becomes food for microbes, Anthony said. The microbes make methane and carbon dioxide that is released into the atmosphere, which, in the winter time, can be seen as bubbles trapped in ice near the lake's surface. 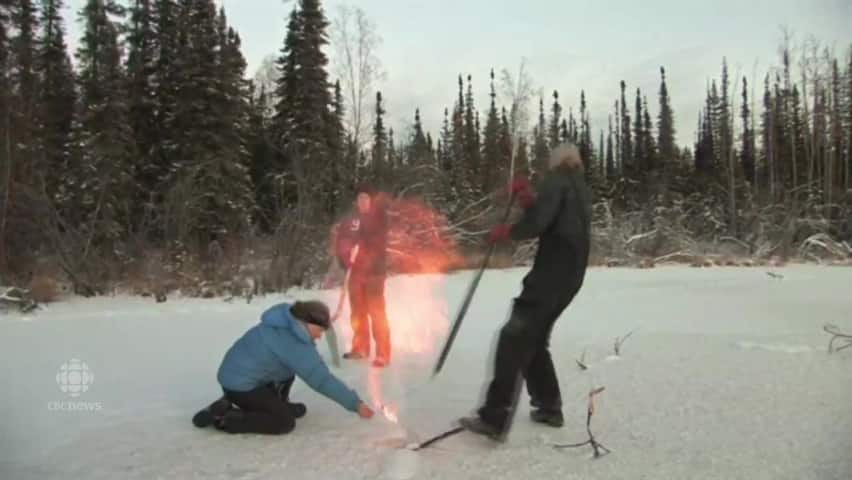 2 years ago
1:45
Katey Walter Anthony explains how thermokarst lakes form and lead to the release of methane. She demonstrates how the potent greenhouse gas gets trapped in ice at the surface of the lake in winter time. 1:45

The thaw caused by thermokarst lakes is deeper and much faster than permafrost thawing on land.

The layer of permafrost that thaws on land is usually only centimetres deep. But Anthony said she has seen up to 15 metres of thawing beneath thermokarst lakes formed within the past 60 years in Alaska's Goldstream Valley.

"These abrupt thaw lakes and their methane emissions are processes that you can't reverse," she said.

These emissions, however, haven't been included in current climate change models.

That's largely because thermokarst lakes account for less than one tenth of all permafrost areas, Anthony said.

However, the lakes are "hotspots" that could more than double the amount of climate warming that's caused by carbon released from thawing permafrost, by the 2050s.

"Despite their small area, they can have a very large impact on the greenhouse gas budgets," she said.

But when you include thermokarst lakes, methane accounts for 70 to 80 per cent of climate warming caused by permafrost. That's significant, because methane is about 30 times more potent than carbon dioxide as a heat-trapping gas, according to the study.

While research has indicated little can be done to prevent thermokarst lakes from forming, Anthony said reducing our carbon footprint could affect the rate at which permafrost on land releases carbon.

The study's findings also suggest there's a need for more research on how permafrost that is hundreds of thousands of years old has survived interglacial periods, and if it will begin thawing this century, Anthony said.

The research, conducted by a team of U.S. and German researchers, is part of a 10-year project funded by NASA to better understand climate change effects on the Arctic. It was also supported by the National Science Foundation.