Non-residents now make up 53.7 per cent of N.W.T. diamond mine workers 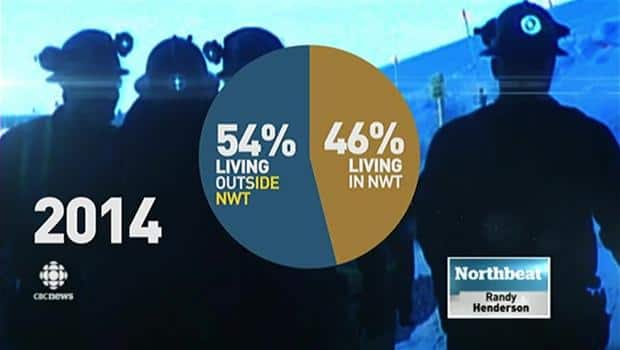 More non-N.W.T. residents are now working at diamond mines in the territory than N.W.T. residents, according to a survey of mine employees released today.

The 2014 N.W.T. Survey of Mining Employees was done by the N.W.T. Bureau of Statistics as part of a commitment made by the mines in their socio-economic agreements.

Non-resident workers said the main reasons keeping them from moving to the Northwest Territories was that they liked their home community (35 per cent) and concern about ​the cost of living in N.W.T. (23.8 per cent).

N.W.T. residents working at the mines who said they were likely to leave the territory in the next 12 months cited the high cost of living as the main reason (44.1 per cent). To be closer to family was a distant second at 11.8 per cent, followed by job opportunities at 9.2 per cent.

But Tom Hoefer, executive director of the N.W.T. and Nunavut Chamber of Mines, says the cost of living is not the only reason Northerners are leaving the territory.

"Part of it is adventure, too," said Hoefer.

"I mean, people get jobs and they have the ability to live wherever they want when they're on two-and-two rotations. So Northerners, too, want to go out and see the rest of the world."

"If you look at what the survey said, a lot of people said the wages up here aren't that competitive," he said.

"We've seen one of the mine owners discontinue flights from Edmonton to Yellowknife, but that's going to take a while to work into the system," he said. "And we're still eager to see what the GNWT's plan is to get 2000 new people over the next five years."

Hoefer says some companies are now trying to recruit workers from as far away as Inuvik.​