Chris Kemshall of Inuvik, N.W.T., went above and beyond while proposing to his girlfriend.

'I didn’t even see the guys in the bucket truck until later,' says Stephanie Hansen

When two RCMP officers showed up at Stephanie Hansen's workplace on Thursday, she received unsettling news about her car. Little did she know, her day was about to flip upside down and soar sky-high in a matter of minutes.

Hansen, a vital statistics specialist in Inuvik, N.W.T., was printing out a birth certificate when she was interrupted.

"Of course, right away you see the RCMP and you're like: Oh my God, what is going on?" said Hansen.

The officers told Hansen that all four of her car's tires were slashed, and that she had to come with them immediately to verify.

"I'm [in] panic mode and a little emotional," recalled Hansen.

She said she was "completely frazzled" as she led the officers down the stairs, and thought to call her boyfriend Chris Kemshall to tell him what happened.

I didn't get a full yes out of her because… she was hyperventilating and stuff.- Chris Kemshall

But as soon as she exited the building, there stood Kemshall, beaming in his power technician suit in all its bright orange and yellow glory.

Confusion ensued on Hansen's face, according to Kemshall, a power line technician with the Northwest Territories Power Corporation.

"Her facial expression, it was priceless," he said.

Kemshall then got on his knees and proposed to his girlfriend of six months. 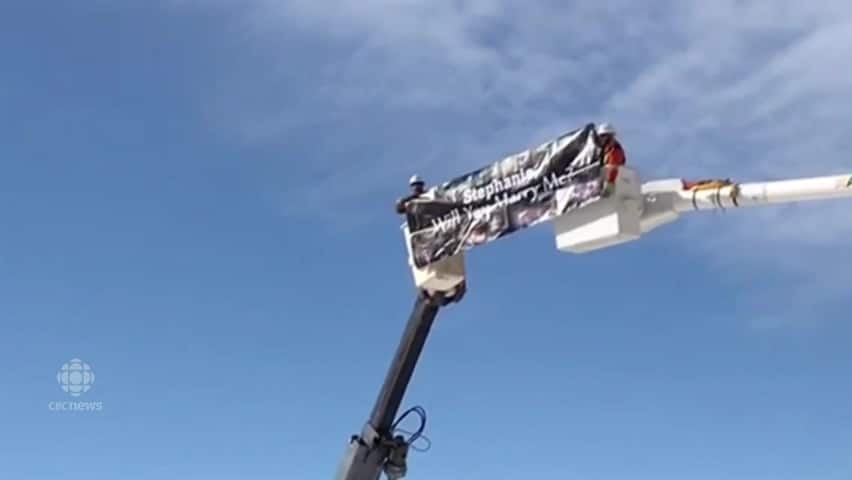 4 years ago
0:49
Chris Kemshall proposed to his girlfriend using cranes, cops and a banner last week. 0:49

"I didn't get a full 'Yes' out of her because… she was hyperventilating and stuff," said Kemshall, who added his girlfriend was shaking and crying.

"She put both her hands out, and I was like, 'Well I just need one," he said laughing.

"He caught me off guard," said Hansen. "It [was] from one extreme of 'Oh my gosh my tires' to being told how much you mean to someone."

​Hansen was so thrown off that she didn't even notice the careful balancing act of two tall cranes in front of her, coming together. Two NTPC workers were waving a heavy duty vinyl banner between them with the words "Stephanie, will you marry me?"

"I didn't even see the guys in the bucket truck until later," she said.

"It melted my heart."

Although it's been a week since they got engaged, Hansen says she's still in shock.

The couple met last fall at the local curling club.

Only a few months into their relationship, Hansen had an accident that tore the ligaments in her ankle.

"I couldn't walk for almost two months," she said.

It was through this challenge that Hansen realized she found someone truly special.

"He literally sat through that with me every single day and took care of me," she said. "I knew he was definitely the one."

"I knew you were the one from the first time I laid eyes on you," said Kemshall. "Always and forever."

Priscilla Hwang is a reporter with CBC News based in Ottawa. She's worked with the investigative unit, CBC Toronto, and CBC North in Yellowknife, Whitehorse and Iqaluit. Before joining the CBC in 2016, she travelled across the Middle East and North Africa to share people's stories. She has a Master of Journalism from Carleton University and speaks Korean, Tunisian Arabic, and dabbles at classical Arabic and French. Want to contact her? Email priscilla.hwang@cbc.ca or @prisksh on Twitter.