Bearded, shaggy and 45 pounds lighter, 26-year-old Kristoffer Glestad is slowly readjusting to urban life after six months living out his childhood dream alone in the remote wilderness of the Northwest Territories.

'People aren't meant to be alone, I can vouch for that,' says Kristoffer Glestad 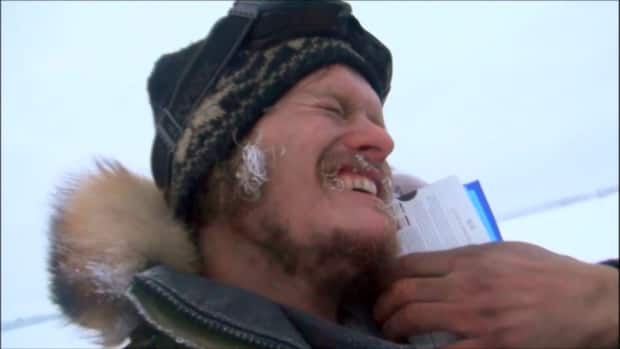 5 years ago
0:57
Exuberant as plane lands; overjoyed as he receives chocolate and beer 0:57
Bearded, shaggy and almost 45 pounds lighter, 26-year-old Kristoffer Glestad is slowly readjusting to urban life after six months living out his childhood dream alone in the remote wilderness of the Northwest Territories.
1 of 0

"People aren't meant to be alone, I can vouch for that," said the Norwegian, less than 24 hours after emerging from the lake area he called home and into the relative bustle of Norman Wells, population 800.

"The dream was to go out to Canada. Live off the land. Fish and see the nature," Glestad said in a soft, reflective voice. "I know it sounds strange, but it was my kind of dream. Just living out there."

The dream was cultivated from a seed planted early in his youth, when he idolized Norwegian adventurers such as Helge Ingstad, who was drawn to Canada's North for its beauty, vastness and unforgiving terrain.

Planning for the epic adventure began a year and a half ago in Norway, where Glestad was a student of mechanical engineering.

Glestad and two friends with a similar desire for adventure used Google maps to choose a remote lake as far as possible from any nearby communities. The idea was to spend one year — all four seasons — living off the land as much as possible.

In the end, only Glestad committed.

"The more I did research, I thought to myself: I had to do this."

'What is this guy doing?'

The lake he settled on — between the remote Dene communities of Tsiigehtchic and Fort Good Hope — has no known English name.

Travis Wright, a pilot with the family-run North-Wright Airways in Norman Wells, had never heard of it. The airline has been ferrying people between communities since 1989, while transporting prospectors, fishermen, hunters and adventurers around the N.W.T. backcountry.

"'What is this guy doing?' was basically going through my mind," said Wright, who admits he feared a tragic outcome.

Nonetheless, in June, Wright flew Glestad and 150 kilograms of gear to the secluded lake an hour west of Norman Wells.

"It was a really weird feeling, dropping a guy off with a one-way ticket."

Wright helped Glestad unload his equipment — including an axe, a rifle, a saw, a tent and rations, but no camp stove — onto the dense shoreline, thick with bloodthirsty mosquitos.

"I shook Kris's hand and more or less said 'Good luck to you.' I was hoping this wasn't the last time I would see him."

'Live simple. That was the plan'

Glestad's first task, after donning his bug suit and gloves, was to build a raft and ferry his gear to a better camp site.

He set about building a simple log cabin from spruce trees and grass for the roof, using a hand-hewn mallet and without nails. For food, he fished, foraged and ate dry rations.

"Live simple. That was the plan," he said.

Keeping busy turned out to be key to dealing with the isolation.

"It takes time to get used to the quietness," he said. "You get so tired of thinking. You think all the time. The only entertainment is what you do yourself."

When he wasn't chopping wood or foraging for food, Glestad came up with other ways to pass the time.

"I tried to sing. I can't sing. I was too embarrassed, so I stopped. I tried to talk to myself, but I felt foolish, so I told stories to myself."

For a time, he spent each day recounting a year of his life. He also relived a European vacation, recounting moments spent in each country.

Among his supplies was a satellite phone that he would use sparingly to check in with a doctor, family and his dedicated co-ordinator in Norway. He used it about three times each month.

At one point, he recalls, "It was 14 days since I said something out loud."

'The richest man on the planet'

With growing darkness and winter rolling in, November was the hardest month.

"I was sleeping in the tent [when] I heard a wolf howling on the left side of the tent, really close. Two others answered on the right side, even closer. That was really exciting."

Glestad tried to remain positive. Every day he found beauty in his surroundings.

"[Looking] at the lake I felt like the richest man on the planet."

And those sparse phone conversations uplifted him

"It was like my theatre or my going to the movies. This was the highlight of the week."

Eventually, Glestad — cold, hungry and lonely — called his co-ordinator in Norway to say he was done.

"I felt like, if I go home, no, I have no regrets. There's nothing more that I wanted to do. I was really happy about what I accomplished."

For three weeks he waited for the ice to freeze thick enough for a Cessna 206 to land on skis.

On Dec. 10, the drone of a small plane echoed across the lake.

That moment was almost as exciting for the pilot as for Glestad.

"Every time I was flying that summer. I thought about Kris," Wright said.

"I landed not too far from him.… He looked at me with a thousand-yard stare. It was incredible for him to see me and me to see him."

Wright, who's been flying with North-Wright since 2008, couldn't believe what Glestad had accomplished in six months, in particular, his "beautiful" cabin. Most expeditions, he said, don't last more than two months.

"We get some odd requests through the company, but not too many people follow through," he said. "I'll remember it for quite a while."

Glestad is now back home on his family's farm near Oslo, just in time for Christmas.

While he admits he "didn't find the meaning of life" on that remote lake, he did experience one big revelation.

"I knew I liked my family. I knew I like being with friends. I didn't know I cared that much. That I could long for being with those people so hard," he said.

"We're not made to be by ourselves."