This week the community of N'Dilo, near Yellowknife, was arranging to have stray dogs rounded up and destroyed. Chief Ernest Betsina hopes the band can work to develop an alternative for the future.

Many communities in the territories face same issues, have to kill dangerous dogs 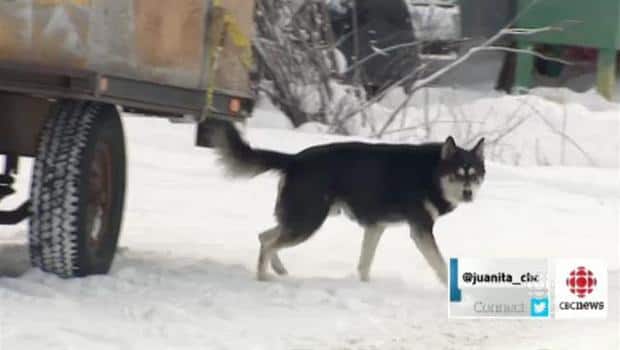 Stray dogs are not a new problem in many northern communities, but in N'Dilo, N.W.T., there are more unchained dogs around now than ever before.

This week, Chief Ernest Betsina had to take the same drastic action many communities take from time to time — arranging to have stray dogs round up and destroyed.

"I understand just recently there was a mauling — a dog mauling — a pack of dogs killed another dog," Betsina said.

"I don't want to see that happen to the children out there or to anybody out there."

But having the odd stray dog killed is not a long-term solution, according to the NWT SPCA.

​"There's so many dogs in the communities because people choose not to [or] can't afford or are unable to get their dogs spayed or neutered. So they're just having puppies. They're reproducing every year, twice a year," said Nicole Spencer, a volunteer with the SPCA.

The organization is hoping to work with local band offices to keep the number of stray dogs down in the communities.

Betsina says he hopes to use band money to help people spay or neuter their dogs.

"That's what we want," Spencer said. "We want the bands to be on board and work with us, to get as many dogs spayed and neutered as possible, because that's the only thing that's going to solve the problem of the dogs roaming in the communities."

People in N'Dilo hope for the same. Otherwise, resident Christine Black says, the community leaders have no other choice but to kill the dogs.

"I don't want nobody walking around N'Dilo with guns. The community leaders tried. They tried. They put papers out to every community, telling them to tie up their dogs. They are doing their job.

"As a community, we need to work together and come up with some sort of a solution for dogs," Black said.