The incumbent Liberal candidate for the Northwest Territories has been involved, in one way or another, with every order of government in the N.W.T., starting with attending tribal council meetings in the Dehcho region as a teenager.

Michael McLeod has been in and out of politics for nearly 40 years.

The incumbent Liberal candidate for the Northwest Territories has been involved, in one way or another, with every order of government in the territory, starting with attending tribal council meetings in the Dehcho region as a teenager.

At age 22, McLeod was made mayor of his hometown, Fort Providence, N.W.T., and 18 years later, McLeod was elected to the territory's legislative assembly for what would be the first of three terms.

"I knew at a young age that getting involved meant the possibility of change, and I felt that we needed to provide our input as young people, and that's what a lot of the leaders wanted," said McLeod, from behind a desk in his sunny yet sparse campaign office in downtown Yellowknife.

Once a youthful fledgling in government, McLeod is now the old hand, having served 12 years in a territorial seat, and four in the House of Commons. This campaign, running against three candidates - none of whom have held federal or territorial office — McLeod is banking on his political experience to get him re-elected.

"I've spent a lot of time working in the trenches," he said, before listing off his other qualifications.

In a federal riding that's gone either red or orange every election for the last three decades, and in a country not quick to flip ruling parties, McLeod is arguably the lead contender in the race for the N.W.T.'s only elected seat in Ottawa. 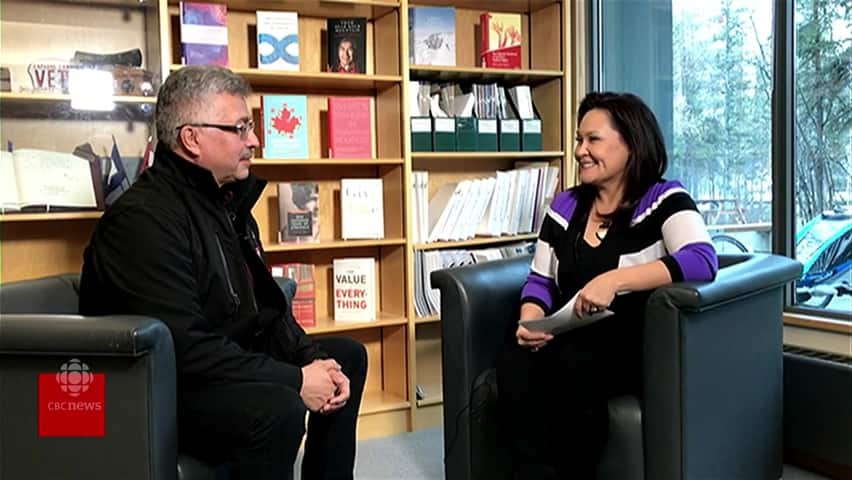 1 year ago
5:08
CBC Northbeat's Juanita Taylor will speak to every candidate aiming to represent one of the territories in the Oct. 21 election. Watch her conversation with Michael McLeod, the Liberal candidate for the Northwest Territories. 5:08

McLeod grew in a family of eight children in Fort Providence, and still lives in the hamlet of about 700 people. While his family produced two well-known territorial leaders — his brother Bob just wrapped up two terms as premier — McLeod said his parents weren't political people.

"My father was very well respected in the community. He was not a politician, but he was one of the people that did a lot of … volunteer work for people," said McLeod. Fluent in three languages, his father helped community members with their income taxes and wrote letters for them.

"When I got involved in politics, a lot of that came from the elders," said McLeod. "They trusted my father, so they trusted me too."

His twenties were busy. McLeod ran a contracting company and worked for Indigenous governments. He studied management at Arctic College and got involved in local politics.

In 1999, unhappy with "the way things were in my community and in the region,"  McLeod set aside plans to go to university for commerce and made a bid for the Deh Cho seat instead.

While at the legislative assembly, McLeod held a variety of cabinet portfolios including housing, Environment and Natural Resources, and Municipal and Community Affairs.

"A lot of times it was because somebody else was ousted, so I had to pick it up," he said.

McLeod believes this ministerial experience makes him well-suited for a cabinet post, should he be re-elected on October 21.

The federal government hasn't had a cabinet minister from the territories since Nunavut MP Hunter Tootoo resigned from cabinet and caucus in 2016 over what he called a "consensual but inappropriate" relationship with a staffer.

But competition is stiff. Prime Minister Justin Trudeau has made a rule of gender parity in cabinet, which in the last government, meant 135 male caucus members competed for 18 spots.

'I don't know which position would be easy'

McLeod said he would be happy with any cabinet assignment, but that the positions that work most with the North are Indigenous-Crown Relations and Intergovernmental and Northern Affairs.

"So would I like one of those positions? If that's what was assigned to me, I'd probably gladly take it," he said.

McLeod didn't seem fazed by the thought of representing the Crown at this level, despite the position's complicated and sometimes strained history with Indigenous peoples.

"I don't know which position would be easy," he said.

Unlike some of his peers on the Hill, McLeod is not a life-long Liberal. He made the choice to run for that party because to him, the Liberals seemed focused on growing the economy while respecting the environment.

McLeod also appreciated the Liberals' "strong agenda for Indigenous people," and he was "very impressed" with party leader Justin Trudeau.

Though the Liberal platform is spare on plans specifically aimed at the territories, McLeod said the party would do lots to improve life up North. It wants to increase the Canada Child Benefit and create tax deductions for northerners who need to travel. The Liberals also say they want to sign land claim agreements and bring high-speed internet to all remote communities by 2030.

Running as a Liberal in this campaign hasn't always been easy. The party drew the ire of Indigenous leaders before the writ was even dropped by ousting star Justice Minister Jody-Wilson Raybould. Explosive revelations that Trudeau wore brownface and blackface on a number of occasions prompted calls from some local leaders for the party leader to resign.

But through it all, McLeod has stayed loyal.

"[Trudeau] has got an open door. We can talk about issues. He's familiar with the North, he knows where we need to go," said McLeod. "I'm comfortable with that. Every government is going to have problems. Every government's going to trip up in some form or fashion, but for me, my focus is the North."