Max Ward, a bush pilot who came to found Wardair, which would go on to become the third largest airline in Canada, died in Edmonton on Monday at 98 years old. His family is celebrating him as "a true Alberta maverick."

Max Ward, 'true Alberta maverick' who founded Wardair in Yellowknife in 1953, was 98

Ward was born in Edmonton in 1921. He served as a flight instructor with the Royal Canadian Air Force during the Second World War before becoming a bush pilot.

In 1953, he founded Wardair in Yellowknife. By 1989, the airline would become the third-largest airline in Canada.

Ward sold the airline to Canadian Airlines that year.

In a news release, the Ward family described him as "a true Alberta maverick."

Ward launched his commercial service with a single 14-passenger single-engine Otter that operated on wheels, skis and floats, according to a biography from his 1989 induction to the Alberta Order of Excellence.

The business expanded steadily, acquiring more Otters, Beaver aircraft and Bristol Freighters, like the one that still stands behind the City of Yellowknife sign on Old Airport Road.

"When DeHavilland built the Twin Otter and then the 4-engine Dash 7, Wardair was the first to operate them in Canada," the citation notes.

Yvonne Quick, a former bush pilot and current Yellowknifer, said Ward ran "one of the best charter operations in Canada."

Ward rode the 1960s travel boom, offering international holidays to ordinary folks at good prices. Good service was his selling point, with champagne and silverware on board his flights. 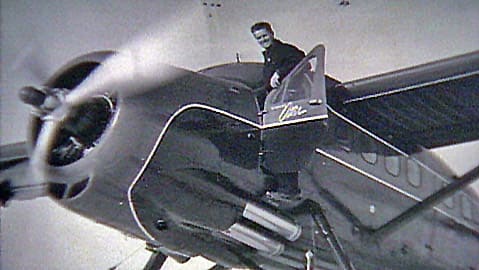 He started with flights between Western Canada and the U.K. In the winter, he added flights to Hawaii and the Caribbean.

"Mr. Ward's pioneering of air transportation in the Northwest Territories has been of immeasurable value to Alberta and has maintained for this province its standing as the supply base for the western Arctic and the Yukon Territory," the Alberta Order of Excellence citation reads.

"On the national scene, Mr. Ward was in the forefront of those urging deregulation of the airline industry."

Ward inspired significant loyalty among his employees, many of whom still gather on social media to remember the company and former employees who have died.

Max Ward passed away last night at his home in YEG. Wardair Canada was the best airline and I am so honoured to have worked for Max and Wardair. The best service. The best aircraft. Fly high Max. Fly high. So many former employees love you. <a href="https://t.co/tbxoZDOUJt">pic.twitter.com/tbxoZDOUJt</a>

"He was a shrewd businessman," said longtime friend Jacquie Perrin, who "never forgot the people who got him to where he was."

Perrin said Ward was flying in Canada's North before planes had radios, before GPS and before good maps were available. "Whenever he took off, his wife Marjorie never knew if she'd see him again."

Von Veh recalled the unique voice that would come over the intercom whenever Ward flew large passenger planes.

Since 1995, Ward allowed the Midnight Sun Float-Plane Fly-In to take place on his property in Yellowknife every two years. The event would not have been possible without him.

In 2000, Ward and his wife survived a plane crash when his float plane hit the water too hard near Yellowknife. Two other passengers also survived. The floats broke off the plane when it slammed into the water, CBC reported at the time.

He was inducted into Canada's Aviation Hall of Fame in 1974, and made an Officer of the Order of Canada in 1975.

WATCH | Max Ward reflects on his career as a northern bush pilot: