After a decades-long fight, the last piece of this B.C. residential school is coming down | CBC News Loaded
North

After a decades-long fight, the last piece of this B.C. residential school is coming down

Forty-six years to the day after the Lower Post residential school in northern British Columbia closed its doors, the final reminder of it will soon be completely demolished.

‘They were monsters,’ says survivor of her time at Lower Post residential school

Forty-six years to the day after the Lower Post residential school in northern British Columbia closed its doors, an excavator slammed into its final standing building on Wednesday.

A cheer rose up from the crowd of about 600 who had gathered to watch as the excavator's bucket broke through the wall — a moment that's been decades in the making.

"It's been something that our elders and our community has been fighting for for years," Deputy Chief of the Daylu Dena Council, Harlan Schilling, said in an interview with CBC News.

Sound on: footage from CBC’s <a href="https://twitter.com/GordonLoverin?ref_src=twsrc%5Etfw">@GordonLoverin</a> of the ceremonial demolition of the Lower Post Residential School. We’ll have much more from the event in the coming days. Children from nearly 40 Indigenous communities from BC and Yukon went to the school. <a href="https://t.co/JeibBUPlPe">pic.twitter.com/JeibBUPlPe</a>

Politicians, including B.C. Premier John Horgan and Yukon Premier Sandy Silver, as well as residential school survivors and their families and supporters, made the trek to the small community for the ceremonial demolition at the site, located near the confluence of the Dease and Liard rivers a few dozen kilometres south of the Yukon border.

The rest of the structure will be razed and burned in the future.

Schilling says that Wednesday's events, which included speeches and a groundbreaking ceremony for a new community centre, really belong to the generations that came before him.

"They didn't let the system or the residential school break them," he said. "They continued to support and advocate for this [demolition] to happen."

Funded by the Canadian government and operated by the Roman Catholic Church, the Lower Post residential school was open from 1951 to 1975, impacting thousands of Indigenous families in the Yukon and B.C.

Kaska elder and artist Mary Caesar attended the school and told Midday Cafe host Leonard Linklater on Tuesday that she was seized with dread and anxiety at the thought of going back to the site for the demolition.

"Lower Post residential school was run by really sadistic priests and nuns and supervisors," she said. "They were monsters."

Kathie Dickie of Fort Nelson, B.C., who also attended Lower Post, remembers being completely stripped of her identity when she arrived.

"Everyone had the identical haircut. You're assigned a number. My number was 19 and my clothing, my facecloth, my towel, had a number."

Dickie did not travel to attend the demolition, but said she has sometimes thought about destroying the building herself.

Now, though, she says she's not sure how she'll feel with it gone. "It could be a way of regaining my power," she told Carolina de Ryk of Daybreak North. "But there's still that heaviness."

Plans to take the building down earlier this month, on National Indigenous People's Day, were put off after animal remains were discovered at a nearby construction site, sparking an RCMP investigation. 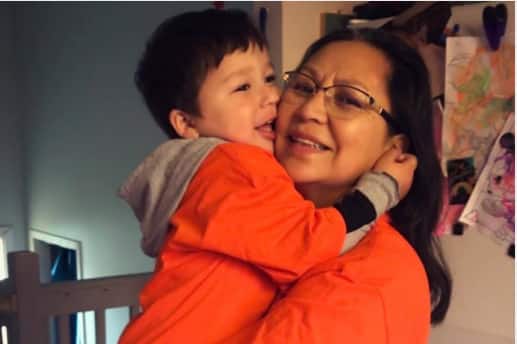 Community centre will be 'new heart' of Lower Post

Schilling says community elders would ultimately like to see the rest of the structure burned, but given the extreme heat in Western Canada this week, that will have to wait.

"Then, it will be up to [survivors] to decide what they want on that site, whether it be a monument or a memorial," he said.

The building, a reminder of a dark and painful chapter in the community's past, was up until recently also part of its day-to-day functioning as an administrative building, Schilling explained.

Now, Lower Post, with a population of roughly 300 people, is set to get a new community centre, housing a gymnasium, cafeteria, post office and government services.

At the end of the day Wednesday, a groundbreaking ceremony at the site of the new centre was held, and trees were planted on the banks of the Liard River.

Schilling describes the building, which is set to be completed in 2022, as "the new heart of this community. The one we had before was sour." 9:12After a decades-long fight, the last piece of the Lower Post Residential School is set to come down
People from the Yukon , B.C., the Kaska Nation in particular, and Indigenous peoples from across the north are coming together to witness the ceremonial demolition of the Lower Post Residential School in northern B.C. Daylu Dena Council Deputy Chief Harlan Schilling spoke with Elyn Jones about what's planned. 9:12

Support is available for anyone affected by the effects of residential schools, and those who are triggered by the latest reports.

The Indian Residential School Survivors Society (IRSSS) can be contacted toll-free at 1-800-721-0066.

The NWT Help Line offers free support to residents of the Northwest Territories, 24 hours a day, seven days a week. It is 100 per cent free and confidential. The NWT Help Line also has an option for follow-up calls. Residents can call the help line at 1-800-661-0844.

In Yukon, mental health services are available to those in both Whitehorse and in rural Yukon communities through Mental Wellness and Substance Use Services. Yukoners can schedule Rapid Access Counselling supports in Whitehorse and all MWSU community hubs by calling 1-867-456-3838.