The Inuvik Tuktoyaktuk Highway officially opened Wednesday with a ceremonial ribbon cutting and inaugural drive to the Arctic coastal community Tuktoyaktuk. The $300 million project took four years to complete, but has been on the minds of some for decades.

$300M project took 4 years to complete, but has been on the minds of some for decades

"It's been a wonderful day to celebrate a vision that began in the 1960s, and has become a reality today," said Premier Bob McLeod to a crowd of locals, dignitaries and media at Inuvik's Midnight Sun Recreation Complex Wednesday morning. "This is an important day for the Northwest Territories, and Canada."

McLeod was joined on stage by representatives from local Indigenous groups, the federal government, and Governor General Julie Payette, who addressed the crowd.

"This is not just the construction of a road — it has meaning," she told the crowd. "A road already is something you take when you take a journey, to go somewhere, to do something. And we are people - people of the North in particular - people who do not have things done to them, but people who do things."

After the ceremonies in Inuvik, dignitaries took part in the ribbon cutting before driving to Tuktoyaktuk, where a community feast was planned for Wednesday evening.

The $300 million road project took about four years to complete, but has been on the minds of some for decades.

It was hailed as a nation-building project by the Stephen Harper government in power when construction started, and as a "road to resources" by some Northern supporters of the project. 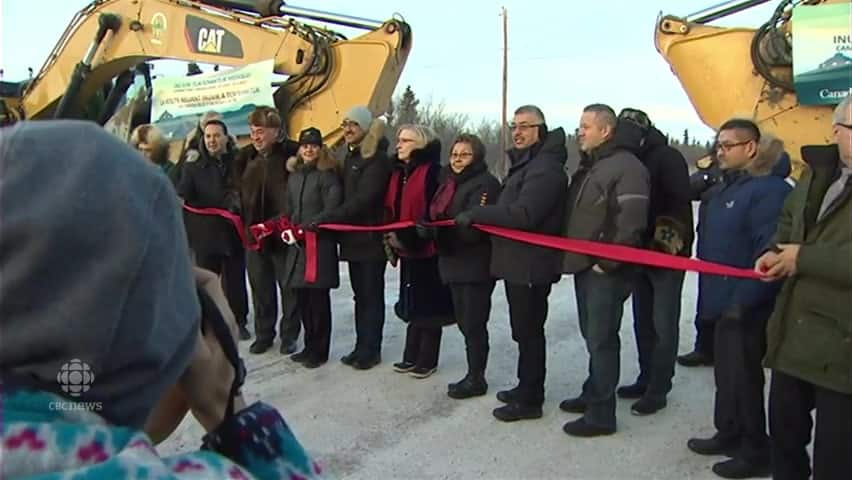 3 years ago
1:52
Officials from the N.W.T. and Ottawa gathered in Inuvik Wednesday for the official opening of the $300M all-weather road to Tuktoyaktuk. 1:52

Since road construction began, companies that were planning offshore development in the Beaufort Sea announced they were indefinitely delaying those plans. An Arctic moratorium on oil and gas development in the region in 2016 effectively shut the door for any near-term development, leading some to question how the cost of the road will ultimately be justified.

But the moratorium will eventually be reconsidered, and much smaller scale projects are already emerging to take advantage of the road's potential boon to tourism.

The road will have a permanent impact on life in the North as the community of Tuktoyaktuk becomes accessible by road year-round, instead of just annually via a winter ice road.

The road itself is a monument to civil engineering and construction, as it is built over delicate tundra and permafrost. Scientists from around the world will be keen to understand how a warming climate will impact the road — and the cost of maintaining it — over time.